We have several injured

Response to a Mass Casualty Emergency 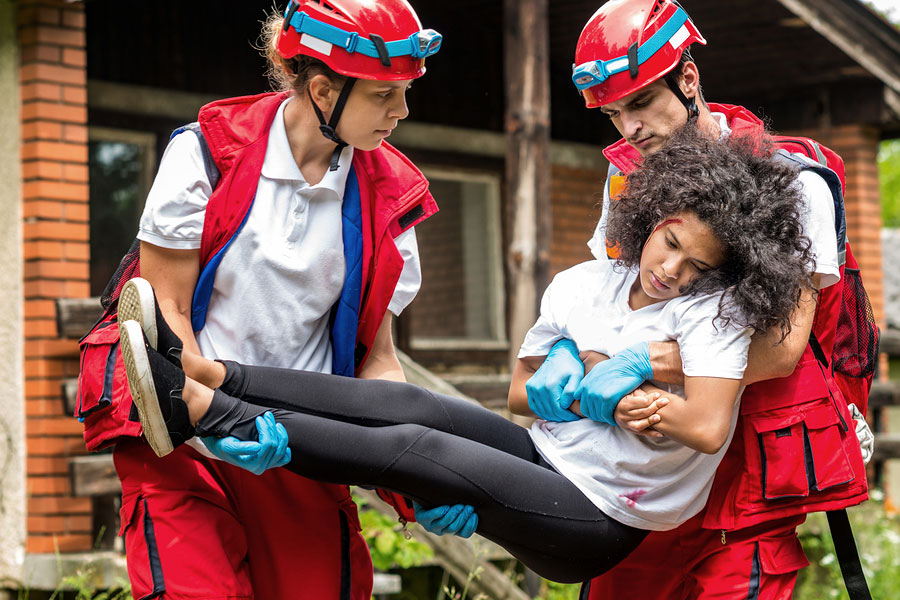 "A great wind came across the wilderness and struck the four corners of the house, and it fell upon the young people, and they are dead." ~Job 1:19

And you shall flee as you fled from the earthquake in the days of Uzziah king of Judah. ~ Zechariah 14:5

The three Bible quotes above describe occasions when several persons were killed or injured by storm winds, an earthquake, conflict, and a structure collapse, i.e Mass Casualty Events (MCEs). Likewise, MCEs happen in our time in this country.

Thursday, January 18, 2018, Midvale, Utah - Sparks from the brakes ignited an explosion in a double tanker semi on I-15 in Midvale, UT, shutting down several lanes for hours. No buildings were close enough by I-15 at that location to be endangered, but there would have been if it had happened ¾ mile north or south of the scene.[1]

Wednesday, March 1, 1950, Beatrice, Nebraska - A natural gas explosion destroyed the West Side Baptist Church just as choir practice was supposed to begin. Fortunately, no one was hurt, because everyone who was supposed to have been there was late. Had the choir been present, there would have been mass casualties.[2]

Sunday, September 15, 1963, Birmingham, Alabama - Fifteen or more sticks of dynamite with a timer were placed by local Ku Klux Klan members under steps on one side of the 16th Street Baptist Church. They exploded, killing four teenage girls and wounding at least 20 other persons.[3]

Palm Sunday, March 27, 1994, Piedmont, Alabama - Goshen United Methodist Church was packed for Palm Sunday. The Easter musical "Watch the Lamb" had begun. Then the power went out. Debris began hitting the church. Someone yelled, "Tornado! Get down!" Then it hit, lifting the roof and dropping it on the congregation. Twenty people were killed, 92 injured.[4]

Sunday, September 24, 2017, Antioch, Tennessee - The morning service had just ended. A lone gunman shot a woman several times in the parking lot of the Burnette Chapel Church of Christ, killing her. Congregants dived under the pews when they heard the shots. The gunman came in. He shot and wounded nine more people before an usher wrestled him for his weapon.[5]

Tuesday, September 19, 2017, Atzala, Mexico - Fourteen persons were in the Santiago Apostol Church for an infant baptism when a magnitude 7.1 earthquake struck. The church roof collapsed, killing 11 family members, including the girl being baptized.[6]

There are mass casualty events in the news every month. A mass casualty event (MCE) is a situation when several persons are injured and/or killed. The cause may be natural, as in storms and quakes, or accidental, or intentional. In the case of the double tanker explosion, it was less than a mile either way from being a potential mass casualty event. Kinds of MCEs which may affect churches, other than explosions, storms, active shooters/killers, and earthquakes (as in the stories above), include fires, chemical spills and leaks, aircraft crashes, and vehicle accidents (especially with a church van or bus).

As with other hazards on this planet, churches are not exempt from mass casualty events. If one struck your church, would you be ready to respond to the injuries? To be ready for a MCE requires us to plan, train, practice, and equip.

The first step in planning for a mass casualty event is knowing which MCEs are the most likely for our church in its location[7] and for its activities.

An important consideration for responding to a MCE is how to coordinate our response. Who leads? Who performs triage (deciding who gets treated first)? Who treats the injured, and who gets supplies and relays messages? In planning this, consider that not everyone on the team may be there when mass casualty event occurs. Several people - ideally the whole team - should not only know how to treat injured persons, but how to determine who needs attention first.

Train everyone on the safety team plus any others in the church who can be trained and are available. What if some team members are among the casualties and can't respond? Training is essential for dealing with life-threatening injuries.[12]

Key skills to learn for MCEs are First Aid, CPR, AED, treating shock, stopping severe bleeding, splinting broken limbs, and care of spinal injuries.[13] It is also important to know how to evaluate injuries to know which ones need more immediate treatment.

Practice includes both practicing skills during training sessions and periodic drills. Training practice is to help us learn, while drills

(1) refresh our memory, honing our skills, and

(2) work out and refine our coordination and teamwork.

Some drills, such as evacuation, lockdowns, and storm sheltering, also train non-team members in church-wide emergency responses. In a mass casualty event response (MCER) drill, some church members who are not on the team can play the roles of injured persons. Others can learn how to assist the team in its response. Medical care professionals in the congregation - doctors nurses, EMTs - would be especially valuable participants.

What would MCERs be without bandages, stethoscopes, antiseptics, pain relievers, splints, tourniquets, and other First Aid and medical supplies. As a church safety ministry, we need supplies to meet any Code Blue incidents which arise.[14] But do we have enough secured for more than two or three injuries or medical emergencies.

God said in Genesis 2:18, "It is not good that the man should be alone; I will make him a helper fit for him." And Solomon said in Ecclesiastes 4:9, "Two are better than one, because they have a good reward for their toil." We work better when we work together.

Likewise, when it comes to a mass casualty event response, it is not good for the church to go it alone. At least, it is not the best. It is better for the church to have a working relationship with local emergency services and health providers, so that in the event of a MCE, there will be cooperation, coordination, and mutual support.

The local law enforcement, fire department, and EMT service can help in knowing what kinds of MCEs are more likely for your location. They can advise on planning, help with training, and participate in drills. And you are helping them by familiarizing them with your campus and people before an event happens.

Also, coordinate your plans with the nearest hospitals. They'll be the ones taking casualties.

What if the mass casualty event is not in the church itself, but in the community, even in the neighborhood? Members of the church's safety ministry could help with the MCE response. The church building and campus could become a treatment place or staging center.

Seventeen years after the Palm Sunday Tornado, Goshen UMC members helped coordinate help for victims of the 2011 tornadoes, and the church served as a shelter and staging center. [4]

When disaster strikes and there are multiple casualties, are you ready? Plan, train, practice, and equip now, just in case.

Hear Kris and Ron discuss the subject of this article on the podcast: https://soundcloud.com/churchsecurityrollcall.

At the end of each podcast, you will learn how to get the special resource for that month's topic.