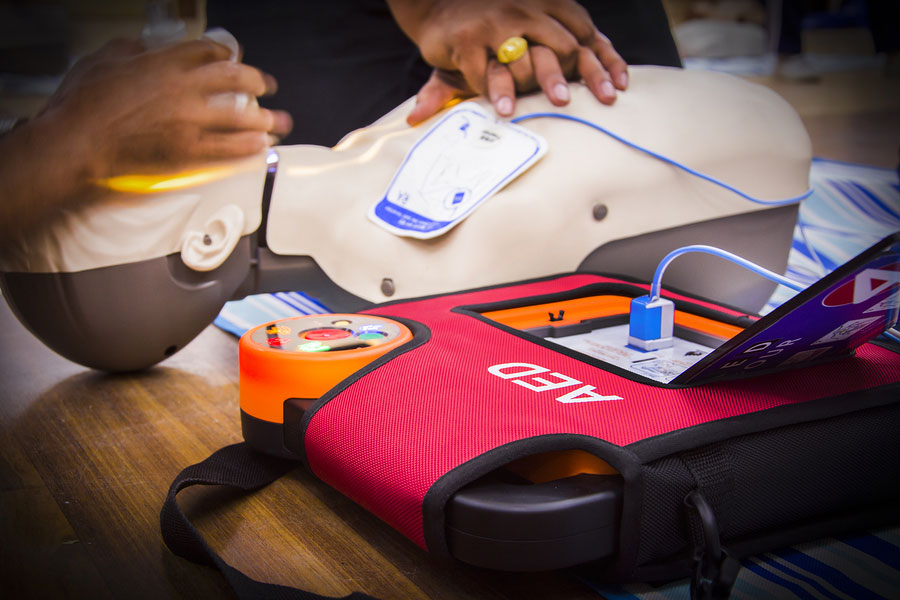 And he took them the same hour of the night and washed their wounds ~ Acts 16:33

In the morning, when the wine had gone out of Nabal, his wife told him these things, and his heart died within him, and he became as a stone. And about ten days later the Lord struck Nabal, and he died. ~ 1 Samuel 25:37-38

Is There a Medic in the House?

The choir was returning to the choir loft after singing a song on the platform steps. Sharon tripped on the end of the riser and fell to the floor. She could not get up.

Jim, a member of the city fire department, left his pew to tend to Sharon. He concluded she had a broken ankle and a concussion. Someone went to the office and called the operator. Nancy, a registered nurse, went up to assist Jim.

The curtains were drawn and the choir went down to the pews for Sharon's privacy until the medics came and she was taken to the ambulance.

[Except for names, this is the retelling of an actual incident in church in the 1970s.]

1976, on the Bicentennial Freedom Train - In a certain city, the Freedom Train was crowded with individuals and families, viewing displays about the Declaration of Independence, the American Revolution, and the following 200 years of our nation's history. The 61-year-old father/grandfather in one family collapsed, unconscious. City fire department medics were stationed on the train for any medical emergencies which would arise. Medics administered CPR, stabilized the man, and had him transported to the hospital. He lived for more than two decades after his heart attack.

Responding to a Need

As living, animate, conscious beings, we respond to stimuli. We have senses, and sensations stimulate us to respond in some way. Even ignoring a sensation can be a response. We know that a person is unconscious when they are described as "unresponsive." This could indicate a life-or-death situation.

As members of a church safety ministry - especially if team members - we are not only called on to be watchful, but to respond to needs. The need may be a visitor wanting directions, or an older person needing help getting in the door. It could be a troubled person needing a calming influence. Another team member may need help in tracking a suspicious person. Or it could be a "Code Blue" call on our radios.

Most of us know that Code Blue means an injury or medical emergency. Our basic training for church safety ministry may not be enough for a heart attack or stroke, a fall with a serious back or neck injury, or a cut with severe bleeding. In situations like these and others, someone present needs to know what to do and how to do it. In the first incident above, the church did not have a safety team. There just happened to be two persons present who knew what to do. This shows how important it is to have people on hand who are trained to respond to an injury or a medical emergency.

Training Has Always Been Needed

In the Bible passages above, we see that Luke, who traveled with Paul, was a physician. He was trained to treat illnesses and injuries. The Philippian jailer was a Roman soldier who'd been trained to treat wounds. The Good Samaritan on the Jericho Road knew something about how to cleanse and bandage injuries - he didn't know it by accident, but learned it somehow. Somebody taught these people the First Aid skills of that time.

It's not only injuries that responders dealt with thousands of years ago. There were also heart attacks and strokes, two of the suspected causes of Nabal's death. There was no known way to treat them then, but there are now. For heart attacks, two of these are cardiopulmonary resuscitation (CPR) and automated external defibrillation (AED), both of which require training.

Training in basic response to injuries and common medical emergencies is available to the general public. Schools and companies often provide this for their employees. Church safety/security ministries should also arrange for their members to receive this training. The basic considerations are when, where, by whom, and how.

At least since the time of the Civil War, some form of First Aid has been taught to nurses and armed services medics. During World War I, It was taught to most soldiers so there was always someone there when needed who could administer First Aid. Then it was taught to Boy Scouts, and was included in the BSA Handbook. During World War II, First Aid training was promoted for the general public as a part of the Civil Defense program.

The primary sources of First Aid training have been the American Red Cross, followed by the Boys Scouts,Girl Scouts, and military services. Now First Aid is taught by community colleges, hospitals, and several other organizations.

The technique of cardiopulmonary resuscitation (CPR) began at least as far back as the 1800s with forced ventilation for persons who had stopped breathing. Early methods involved moving the arms and compressing the chest. These were taught in the 1911 Boy Scout Handbook.

By the middle of the 1900s, the medical profession adopted ventilation with mouth-to-mouth resuscitation and chest compression. It was also used to restart the heart after a heart attack.

CPR instruction is taught not only to medical professionals, but also to firefighters, medics, and law enforcement officers. Now CPR training is available to anyone, including the neighbor down the street, your co-worker, and church safety team members. As with widespread knowledge of First Aid, the intent is that whenever it is needed, someone will be present who can administer it. The Freedom Train incident above is only one of thousands of cases where lives have been saved by CPR because someone who knew it was there.

The primary organization for CPR training has been the American Heart Association (AHA), but it is also taught by the Red Cross and the National CPR Foundation.

Many of us have seen the emergency room scene on a television drama when a patient's heart goes into tachycardia (rapid heartbeat). The doctor or nurse grabs two electrodes and places them on the patient's chest. An electric shock restarts the heart. The device used in the ER was an external defibrillator. The shock interrupts the overly rapid heartbeat so the heart can resume its normal cycles.

External defibrillators were first used on people in 1947. A portable version was introduced in the 1960s for emergencies.

Since then the automated external defibrillator (AED) has been invented. An AED calculates the best timing and strength of a discharge. This development has made use of defibrillation available to those who are not medical professionals. As with widespread CPR training, this has saved many lives when doctors, nurses, and emergency medical technicians were not immediately available.

Care must be taken when using an AED to avoid injuring not only the patient, but also the responder and other persons at the scene. This means that an AED should be used only by persons who are sufficiently trained to be certified.

How to Receive First Aid, CPR and AED Training

"I see the need for training," you might say, "So how do I get it?" Good question!

At the time of this writing, Sheepdog Church Security has not yet had its own training courses in these medical response skills. However, training in First Aid, CPR and AED leading to certification is available in most communities. Larger cities usually have American Red Cross offices with classrooms where First Aid, CPR, AED and other skill sets are taught. Other options are available in cities and towns without Red Cross classrooms.

Local organizations and agencies may offer classes with Red Cross instructors. For example, in Juneau, Alaska, these classes are hosted by the Department of Parks and Recreation.

The American Heart Association has a number of affiliates, such as In-Pulse CPR, which provide CPR/AED/First Aid classes in towns such as Shakopee, Minnesota, which are not in metropolitan areas (such as Minneapolis/St. Paul).

A Google or Bing search for "CPR training, [your town]" will bring up the training/certification options for your area. Individuals may apply, but the best option is for the church safety ministry to sign up the whole team for First Aid/CPR/AED training and certification.

Hear Kris and Ron discuss this on the podcast https://soundcloud.com/churchsecurityrollcall