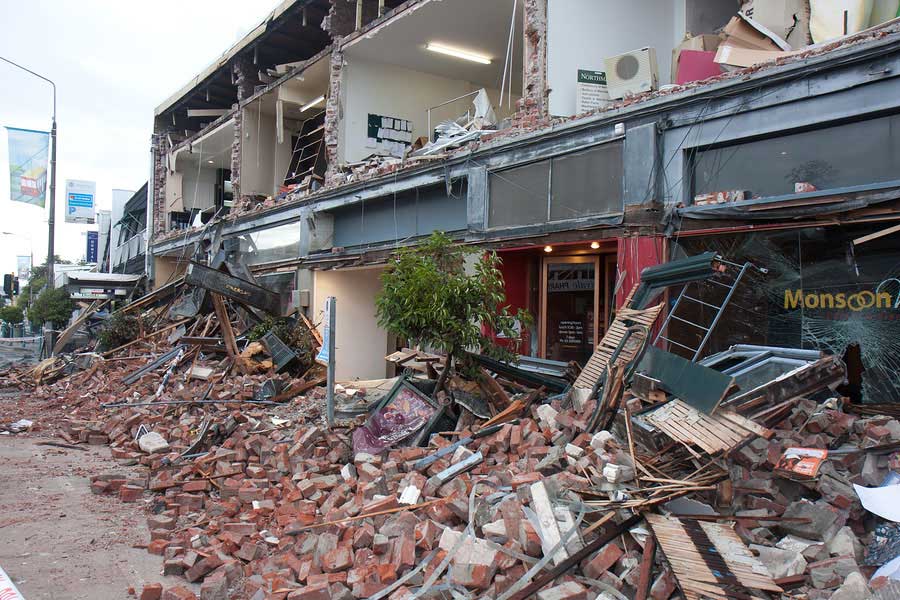 And you shall flee as you fled from the earthquake in the days of Uzziah king of Judah. ~ Zechariah 14:5

There will be earthquakes in various places; ~ Mark 13:8

There is no specific season for floods, earthquakes or landslides. Though each of these may be more prevalent in one location than another, every area has at least some degree of risk. Desert dry streambeds are flash flood hazards when it rains upstream. "Every area" does apply to earthquakes, though damaging ones are expected in certain zones. Landslides can occur any place that has sharp differences in elevation, and the causes can include floods and quakes. Essentially, a flood, an earthquake, or a landslide may happen almost anywhere, and anywhere it happens, we must be ready.

Here are a few instances of flood, earthquake, and landslide:

Mayer, Arizona, July 19, 2017 - Flash floods swept through the Mayer and Spring Valley areas. Two people or more had to be rescued from their homes. Thirty or more were evacuated. There was damage over a wide area. Damage included the gear of campers. [3]

Mexico, September 19, 2017 - A massive earthquake struck central Mexico, one of two temblors damaging dozens of churches across the area. In Atzala, an infant baptism was in progress when the quake hit. Eleven persons, including the baby, were killed. There were only two survivors in the church. [6]

Seattle, Washington, mid-1980s - A local congregation sold its original property and purchased a surplus school building. Before moving in, the city required them to upgrade it to new earthquake standards.

Oso, Washington, March 22, 2014 - 43 people were killed when the side of an unstable hill collapsed. The slide crossed the Stillaguamish River and wiped out a rural neighborhood. 49 buildings were demolished. [7]

Charleston, West Virginia, March 13, 2015 - A landslide from the hill where Yeager Airport sits destroyed a home and a church. [8][9]

What Are Our Chances?

When it comes to floods, earthquakes, landslides, and wildfires, all are distinct possibilities in Southern California. Earthquakes are common any time of year. Wildfires are a reasonable danger through the last half of the year, followed by floods and landslides when the rains come.

Extensive river flooding is periodic in the Missouri and Mississippi basins, and not only in the lower reaches. This is because these rivers are not too deep, carry huge volumes of water, and have wide, shallow, heavily-populated floodplains.

Some locations are in peril of flash flooding any time of year. This includes property close to narrow streams draining hills, such as in the Appalachians, Rockies, Ozarks, Cascades, and other mountainous and hilly regions. For instance, heavy rain can come any time of year in eastern Ohio, quickly filling small runs and creeks over their banks.

The West Coast, South-Southeast Alaska and the Aleutians may be more earthquake prone, but a few years ago a strong quake damaged buildings in Central Virginia, quakes (caused by gas drilling) have been shaking Oklahoma and southern Kansas, and quakes are sometimes felt in the Yellowstone area. Also, a rift beneath the Mississippi River generated the New Madrid Earthquakes in 1811 and 1812. They changed the course of the river, and one was felt as far away as Boston. Scientists wonder when the next one will happen. Except in these most prone areas, earthquake preparation is on the level of "just in case."

Except for solid rock, anytime buildings are built on the brink of a hill or beneath the face of a steep hill, there is some possibility of a landslide. This is more likely for certain types of soil. The danger increases when the soil is saturated after prolonged or repeated heavy rain, as was the case in Oso. Saturated soil increased the instability of the hillside.

Anywhere it happens, we must be ready. Preparation and readiness for non-seasonal natural disasters are on two levels - new buildings and existing structures. In either case, keep church records (or copies) in a safe location.

Building a new home for your church provides an excellent opportunity to have a place ready to meet severe weather and other natural hazards.

The first consideration in constructing a new church building is location. For protection from floods, select a site on higher ground, away from streams prone to flash flooding. Being close to a river or creek may provide a nice atmosphere and a lovely view, but it also makes flood damage a greater liability.

In locations with a high wildfire hazard, site selection is also part of the equation. Proximity to trees and brush increases the danger. A 360° concrete parking lot reduces the church's vulnerability.

If the entire town is prone to flooding, have a more flood-resistant design. Elevate the sanctuary above the most likely flood levels. Have electrical outlets higher than the baseboards. Put the breaker box and cut-off switch on a high level, with a separate cut-off switch for circuits in the basement. Have flood-proof windows and outside doors in the basement.

Choices are more limited with an existing structure, but some modifications can be made.

In flood-prone areas, first is the electrical system. Raise the outlets to 3 feet above the floor. Take carpet off the floor - it holds the water longer, increasing damage to the floor itself.

For a single-storey building with the floor at or near ground level, follow FEMA's 2011 guideline:

"If your property is in a flood hazard area, you can reduce the damage caused by flood waters and make cleanup easier by using flood damage resistant building materials. Building materials are considered flood resistant if they can withstand direct contact with flood waters for at least 72 hours without being significantly damaged. "Significant damage" means any damage that requires more than low cost, cosmetic repair (such as painting)." [10]

Fire-resistant siding can be put on the building's exterior. Drainage of the parking lot may be improved. In a quake area, buildings can be retroactively quake-proofed.

Plan your response to events that are the most likely to happen in your area. Practice responses such as:

In "Whether the Weather" being able to receive alerts was stressed. But alerts count when they are heeded. We don't receive warning of earthquakes (we may be warned of tsunamis), but we can receive an alert for likely flooding. If this puts the church in danger, we can respond appropriately. If the church is in a safe location, we can prepare to help evacuees.

Get this month's resource, "Is Your Church Prepared for Severe Weather?" https://sheepdog-church-security.thinkific.com/courses/severe-weather-and-natural-disasters