View with Suspicion, Handle with Caution 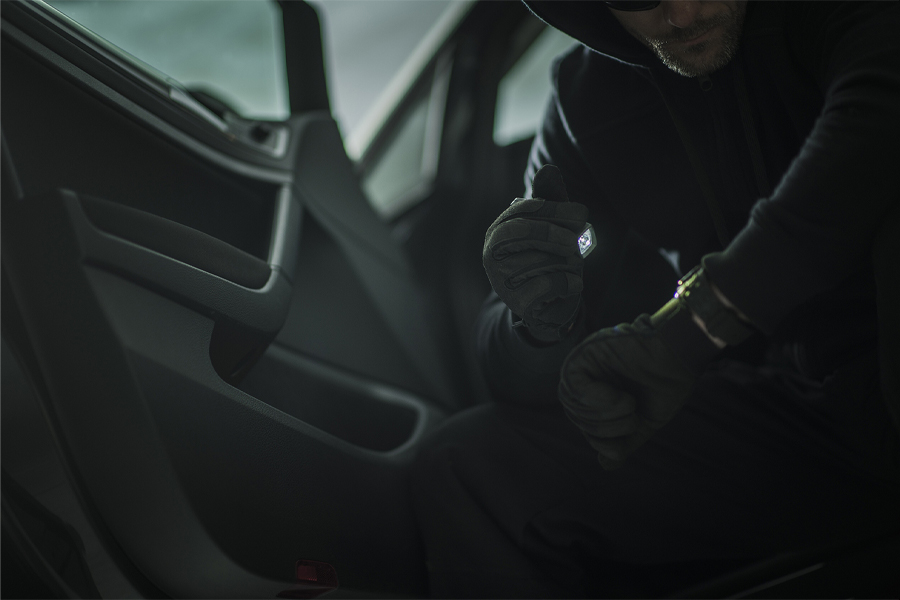 Several instances of stealth are described in the Bible.

* Ehud wore a hidden weapon when he met the King of Moab:
And Ehud made for himself a sword with two edges, a cubit in length, and he bound it on his right thigh under his clothes (Judges 3:16).

* Wicked persons lie in ambush and set traps for innocent persons:
[The wicked man] sitteth in the lurking places of the villages: in the secret places doth he murder the innocent: his eyes are privily set against the poor (Psalm 10:8).

* The sight of chariots and horsemen coming was suspicious, so it had to be checked on (in this case, the danger was real):
So Jehu rode in a chariot, and went to Jezreel ... And there stood a watchman on the tower in Jezreel, and he spied the company of Jehu as he came, and said, “I see a company.” And Joram said, “Take an horseman, and send to meet them, and let him say ‘Is it peace?’” (2 Kings 8:16-17).

* Moses and Joshua sent out spies before an assault:
-- And Moses sent them to spy out the land of Canaan ... (Numbers 13:17).
-- And Moses sent to spy out Jaazer, and they took the villages thereof, and drove out the Amorites that were there (Numbers 21:32).
-- And Joshua the son of Nun sent out of Shittim two men to spy secretly, saying, “Go view the land, even Jericho” … (Joshua 2:1).

According to Homer, the Greeks finally conquered Troy by using deception. The "peace gift" of a giant wooden horse was filled with soldiers who emerged when inside the gates of the city.

Now, about 2,800 years after Homer, stealth and deception are often used by those who attack churches and other religious entities. Examples are weapons hidden in clothing, bags, boxes, or other items (such as an umbrella), and explosives, incendiaries, or toxic materials in seemingly innocent items. [2][3][4][5] [6]

Churches and other targets are often spied out (cased) before a burglary, vandalism, arson, or violent attack. This can be done on foot or from a vehicle as another form of stealth. If detected and handled properly, the crime may be prevented by either deterrence or apprehension of the criminals.

Cumberland County, Tennessee, February 24, 2019 - A suspicious vehicle missing a license plate was found in the parking lot of a Baptist church. 911 was called. Responding deputies found out the car had been stolen in Texas. Later, they spotted a man and a woman walking along the highway on which the church is located. This couple had driven the stolen car to the church and left it there when they ran out of fuel.[7]

New Morgan Borough, Pennsylvania, August 6, 2022 - Two security guards at a business in New Morgan Borough spotted a suspicious van just after midnight in a lot on an industrial site. They were there to stop thefts of catalytic converters from vehicles. As they approached the van, they noticed someone hiding. They stopped and one guard called police. Shots rang out and both guards were wounded, one fatally. Composite sketches of a person of interest have been made public.[8][9]

Brevard, North Carolina, March 14, 2021 - A church security team member found a suspicious object on church property after the Bible study and before the worship service. Police were called, and several unexploded incendiary devices were discovered. The church and all businesses in that section of downtown Brevard were evacuated. Several other devices, already detonated, were found in the area around other publicly-accessible buildings. A suspect was arrested and charged the next day.[10][11]

Holmes County, Florida, February 11, 2022 - A citizen called 911 after seeing a suspicious truck parked behind a church where it was hidden from traffic on the street. Deputies found a woman under the influence of drugs. They discovered drugs and drug paraphernalia in the truck and stolen "scrap" metal in the bed along with tools for removing metals. She was arrested on drug charges and for theft.[12]

Lakeport, California, June 26, 2022 - A suspicious device was discovered on the ground at a church in Lakeport. The police department closed off and evacuated several blocks just after noon, and the bomb squad deactivated the device. It was an explosive device with a power source and shrapnel. Later that day, a suspect was arrested. He lived across the street and had previously been arrested for passing counterfeit bills.[13][14]

Albuquerque, New Mexico, September 24, 2022 - On a Friday night, a 61-year-old church security guard spotted a suspicious truck on church property and went out to check it. He took photos of the vehicle and its license plate and sent them to the Security Supervisor. That was his last contact.

Police were called. They finally found his body in an arroyo (seasonal stream channel). He had apparently been run over then dragged by the vehicle to where he went over the edge. The information he transmitted helped the police to identify and arrest a 35-year-old suspect with an arrest record including assault and domestic violence.[15]16]

The content of this article is discussed by Kris in a videocast on the YouTube channel Sheepdog Church Security Academy. He adds his perspectives from his experience in the military, law enforcement, and church security. The audio is in a Church Security Roll Call podcast.[17]

Beneath the video is a link to the Show Notes (article summary. The link will be for this article until the next article and videocast are posted a week later.

In our awareness of the church's surroundings, both on the grounds and on the street, something may seem suspect. It makes us suspicious, wondering whether it is a threat. This may be an object which looks odd or just seems out-of-place. Perhaps it's a person acting in a strange manner, such as trying to be stealthy. It could be a vehicle.

We may have the urge to go check it out, but shouldn't be too hasty. The old saying is true: "Fools rush in where angels fear to tread" (this is based on 2 Peter 2:10-11 and Jude 1:9). Caution is called for. If this is a real threat, then there is danger in approaching the suspicious object, person, or vehicle.

In the news stories above, suspicious objects were live explosive and incendiary devices, and two guards were killed and another wounded while investigating suspicious vehicles. There are other stories (not reported here) where suspicious people proved dangerous.

The Peril of Suspicious Vehicles

Most of us have seen dash cam footage of law enforcement officers in a traffic stop or approaching a parked vehicle. In several of these scenes, the officer is attacked one way or another - punched, tackled, shot at, driven at. If this can happened to an armed peace officer, what can happen to you checking out a suspicious vehicle?

A suspicious vehicle is more hazardous. It may be occupied. If it appears unoccupied, someone could be hiding in it. We may not see a weapon until an occupant lifts it to shoot. As happened in Albuquerque, the vehicle itself could be a weapon. Suspicious vehicles are especially perilous at night with less visibility, because there is a lot we cannot see.

How to Spot a Suspicious Vehicle

First, the parking lot and streets by the church (including alleys) should be monitored. Outside patrols coupled with surveillance cameras enable a more thorough perspective. Patrolling parking lots is covered in the "Safety Team Fundamentals" training module. Slide 35 of the classroom PowerPoint, "Details on Patrolling," covers "Parking lots and parking structures." This includes looking between and under vehicles plus being attentive to people in the vehicles. If you see someone in a vehicle, then you don't, maybe they're trying to hide from you.

What makes a vehicle suspicious? Here are several ways it can raise suspicion:

It is easy to see how these actions raise suspicion. However, for many of them there may be legitimate reasons having nothing to do with an intended crime. Numbers 5-8 are obviously suspicious. The last one appears to be either a medical emergency or a napping driver, but might be a ruse to ambush who ever responds. As to #9, maybe the driver left with someone else and will be back to get the car.

What Is the Reason?

Have you just stopped your car for some reason, even going into a parking lot to be out of traffic? Also, you may have gone slowly down a street looking for an address. There may be a good reason for what makes the vehicle appear to be suspicious. Here are a few good reasons for the suspicious actions:

However, there are some up-to-no-good reasons for a vehicle remaining parked in the lot while occupied, for an occupant watching people come and go, etc., and other suspicious indicators. Some may be minimal (low threat), but others may be more serious.

Putting Light on the Subject

It is really hazardous to approach a suspicious vehicle in the dark. That was the case in New Morgan. The lot was unlit. A strategy of using the security patrol car's lights to blind the driver of the suspect van and keeping themselves outside of the beam could possibly have reduced the chance of being shot.

On the other hand, the parking lots of the church in Albuquerque are well lit. However, I don't know how many of the lights were on when the church security guard spotted the truck on a Friday night - the parking lot is quite large. We do know he did not always stay to one side or the other to avoid being run over (he was able to photograph the license plate). We do not know if the driver chased him down, even running over curbs. The arroyo is between the church and the main parking lot.

There are many churches with poor outside lighting, meaning the parking lot is dark at night. The general rule for these places is to not approach a suspicious vehicle in the dark, but call the police. Meanwhile, keep your eye on the vehicle. If it leaves, note which direction it goes, and tell the police.

Training is essential for Church Security Team members. For instance, issues related to approaching suspicious vehicles are addressed in three of the eight training modules in the Safety Member Certification program: patrol procedures in "Safety Team Fundamentals," calming a distraught or angry driver in "Deescalating Disruptive Persons," and responding to a show of force in "Basic Use of Force Laws." Every Church Safety Team is urged to have all its members trained and certified through this program.[1]

Team Certification (church-hosted classes) can train all of the team at one time. This is ideal when starting a team, when refreshing training, and inducting several new members at one time. Depending on where you are located, a Certified Onsite Instructor may be available.[18]

Individual Certification (Self-paced online instruction) can train a new member or one who was unable to attend a class.

Online Events (live Zoom classes) are taught by Kris on Sunday afternoons at 3:00 pm. The 2022-2023 school year is in progress. Quarter 1 is completed, and the second class of Quarter 2 - "Active Shooter Response" - will be on November 20. Even now, a member can enroll, finishing when all eight modules are completed.

Auditing is taking a class, but not for credit. The cost is lower. Examples of classes that should be audited by some are "Protecting Children from Abuse" for ministry leaders and all teachers and childcare workers, both staff and volunteer, "Arson and Fire Safety" for all those who will be leading or directing fire evacuations, and "Mass Trauma Emergencies" for ushers, greeters, and those who enlist as medical responders.

If you become suspicious about a vehicle outside your church, what should you do?

There are three other articles for Novembers: "2002 Conception Abbey Shooting" (Lesson Learned), "Have Healthy Holidays" (Keep the Church Safe and Healthful), and "Stop the Grinch" (Responding to Child Abuse).