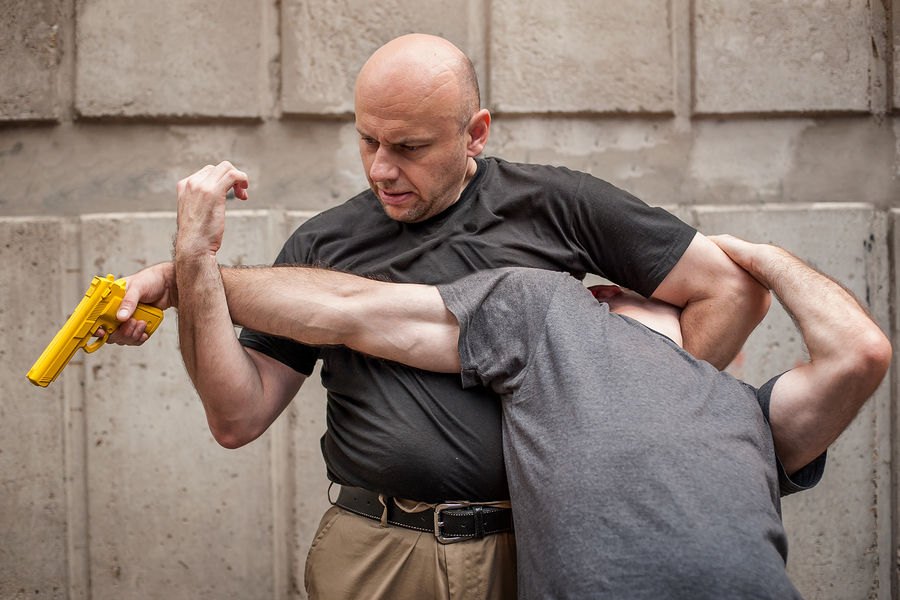 An article in a series on Unarmed Self-Defense featuring the training course Basic Use of Force Laws v4.[1]

Jacob was left alone, and a man wrestled with him until the breaking of the day (Genesis 32:24).

And though a man might prevail against one who is alone, two will withstand him (Ecclesiastes 4:12). 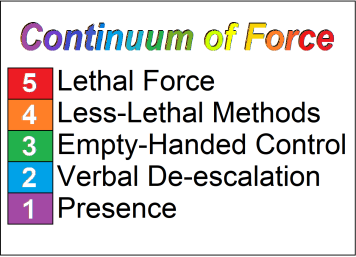 There is a lot we can do with our hands. We can pick fruit, knead bread dough, mold clay, massage sore muscles, scatter chicken feed, write in the sand, finger paint, etc. We can also defend ourselves. There are sports which act out unarmed combat (and defense): wrestling, boxing, and competitive martial arts.

More than defense, these skills can also be used in maintaining order. Right in the middle of the Continuum of Force is Empty-Handed Control. This ranges from a light touch to get someone’s attention to holds, takedowns, kicks, and punches.

Knife wielder escorted out of church

Port Angeles, Washington, November 1, 2020 – Two security guards at a church in Port Angeles escorted a disruptive person out during the Sunday morning service. During the encounter, he pulled out a knife. One of the guards received a cut, but they got him out without drawing weapons of their own (that is, if they had them). An off-duty policeman called on-duty officers who came and took the offender into custody.[2]

Threatener escorted out of church

Trenton, New Jersey, November 10, 2014 – A man threatened people in a Trenton church. Responding police escorted him out. News reports make no mention of weapons drawn. The offender had drugs prepared for sale on his person.[3]

Woman, 76, defends self with stick

San Francisco, California, March 17, 2021 – A 76-year-old Asian woman waiting for a bus was attacked by a man. She found a stick, picked it up, and defended herself, injuring the attacker, who had to be taken to the hospital.[4]

Solihull, West Midlands, England, Great Britain, February 13, 2018 – Three robbers armed with machetes bashed in the door of a home in Solihull. They began attacking a 17-year-old boy while demanding cash. The boy’s father came down the stairs and rescued his son. He drove off the robbers using Krav Maga, even as he himself was being hit and bloodied.[5]

Fontana, California, September 28 2020 – An 82-year-old woman was being beaten by a 5’9’’ former neighbor in his 50s. She was rescued by her 67-year-old friend who’s only 4’10” tall. A former security guard with a black belt in JiuJitsu, she brought the assailant down with a sweep kick, two elbow blows to the sternum, and a finger-bender. Responding police found him prostrate, held down by her knees.[6]

The free download for June is the Safety Member Training Record. This excel file has a template training record for Church Safety Team members. This tab can be copied to new tabs to have the training record for each team member in the same file. The first two tabs are “Instructions” for copying and using the Training Record and “Training Information” about every training course and drill listed. Click *HERE* to get it. If you’re not already subscribed, you’ll be signed up to receive the weekly email update and the monthly newsletter The Church Guardian.[7]

Speaking about training, empty-handed control is covered in the Sheepdog Church Security training course Basic Use of Force Laws v4.[1] A Church Safety Ministry can receive additional training on the use of force through SDCS’s affiliation with the Worship Security Association and its library of training videos.[8]

By One's Own Hands

The current use of force standard is no more force than necessary. Skills in unarmed self-defense may reduce the need to resort to weapons, whether lethal or less-than-lethal. Not only that, but in some situations a Safety Team member might not have enough time to draw a weapon, in which case self-defense skills are critical. 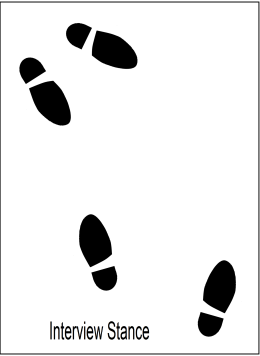 Effective self-defense depends largely on being in a position to defend yourself – literally. Kris Moloney recommends the Interview Stance. As he describes it in a Church Security Guide article, “In an interview stance, you have your feet shoulder width apart with one foot slightly back. You should also have your hands in front of you.”[9] This is not to be a threatening position, but if threatened or the other person makes an aggressive move, you can react quickly.

Parrying is a term that is usually used in fencing, staff/stick fighting, or the use of other melee weapons, but it can also be applied to boxing. In unarmed self-defense, this is blocking a blow by an assailant, whether he’s using a fist, an object, or a foot. The advantage of the interview stance can be clearly seen here. You are positioned to respond and far enough back to give you the needed time and space.

How you move your arms (or legs) depends on where the blow is coming from. For instance, a straight shot from the opponent’s shoulder is parried by an upward outward sweep of your arm on that side. A low center blow is knocked off by a downward sweep. For a kick, move to the side, follow behind and under the attacker’s leg/foot with your arm and continue its swing to throw him off balance.

Practice parrying with a partner on a mat to soften the impact of falling. 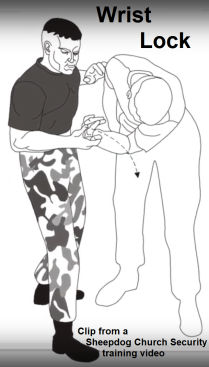 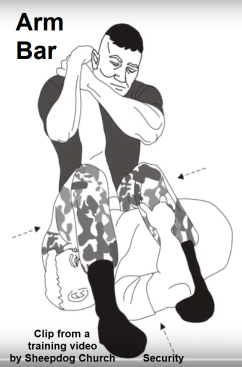 The purpose of a hold is to control the subject. This is done by immobilizing a limb or by inducing pain when the subject does not comply. For example, in the news story from Fontana,[6] the finger-bender was a pain-compliance hold, and the 5’9” suspect called for mercy from the 4’10” woman. Common holds are the wrist lock, the escort hold, and arm bar. If you and the attacker end up on the floor, a leg lock may work.

Takedowns, knockdowns, and throws are just what the terms say, taking/knocking/throwing an opponent down to the floor or ground. This is common in combat sports. Tackling is a standard football move, and a way to take down an attacker when you have enough room for the drive-and-dive – a move which has been used against an active shooter. Other means are tripping a lunging assailant, pushing him off balance, and pulling him down.

Church does not seem to be the place for a knock-down, drag-out fight with punching and kicking, but with some violent disruptors it may come to that. The goal is not to knock someone unconscious, but to gain control.

Most of us have not grown up learning street fighting. Many of us have been on a football or wrestling team. Some may have also been in boxing. Those experiences may help in self-defense, but it is important to realize that a violent disrupter does not play by the “rules of the game” and will not be stopped by a blown whistle or a yellow flag. Since we are in church security, we are reluctant to use excessive force. However, we need to learn effective force.

Most areas of the country have schools and individuals who teach martial arts, such as Jiu Jitsu, Judo, Karate, Tae Kwando, and Krav Maga. Martial arts competitions have rules for the combatants to follow or be penalized, even though these “sports” were first developed for self-defense. In a real self-defense situation we may need to realize, like the woman jogger in Seattle, that "this doesn't have to be a fair fight."[10]

While many things can be learned from videos and online classes, some skills are best learned with in-person instruction that includes practice and coaching. Four of these are First Aid, Cardiopulmonary Resuscitation (CPR), Tactical Shooting, and Unarmed Self-Defense. As an example, consider a video clip from Section 6 (Unarmed Control Techniques )[11] of the Individual Training (Online) version of the Sheepdog Church Security course Basic Use of Force Laws v4.[1]. At the end of the clip, the instructor says, “You should not attempt any of the techniques I’ve described here without proper training.”

Sheepdog Church Security does have some onsite instructors who will conduct SDCS training classes for churches.[12] These are for SDCS certification of Safety Team members, which includes Basic Use of Force Laws. However, as of the time of this writing, none of the onsite instructors teaches unarmed self-defense. Seek this training locally. However, many martial arts trainers focus on competition. With classes for the Church Safety Team, Kris recommends asking the instructors to focus on the self-defense and behavior-control techniques.

In most heated confrontations and efforts to control unacceptable behavior, using weapons of any kind is inadvisable at best and may be illegal. Therefore, Empty-Handed Control techniques are usually the best means of self-defense when verbal de-escalation doesn’t work. These techniques are best learned through in-person instruction and coaching.

The other three articles for June are “An Abundance of Counselors” (Worship Security Association), “On the Radar” (Situational Awareness), and “The 2005 World Changers Church Shooting” (A Lesson Learned).