To Shoot or Not Shoot 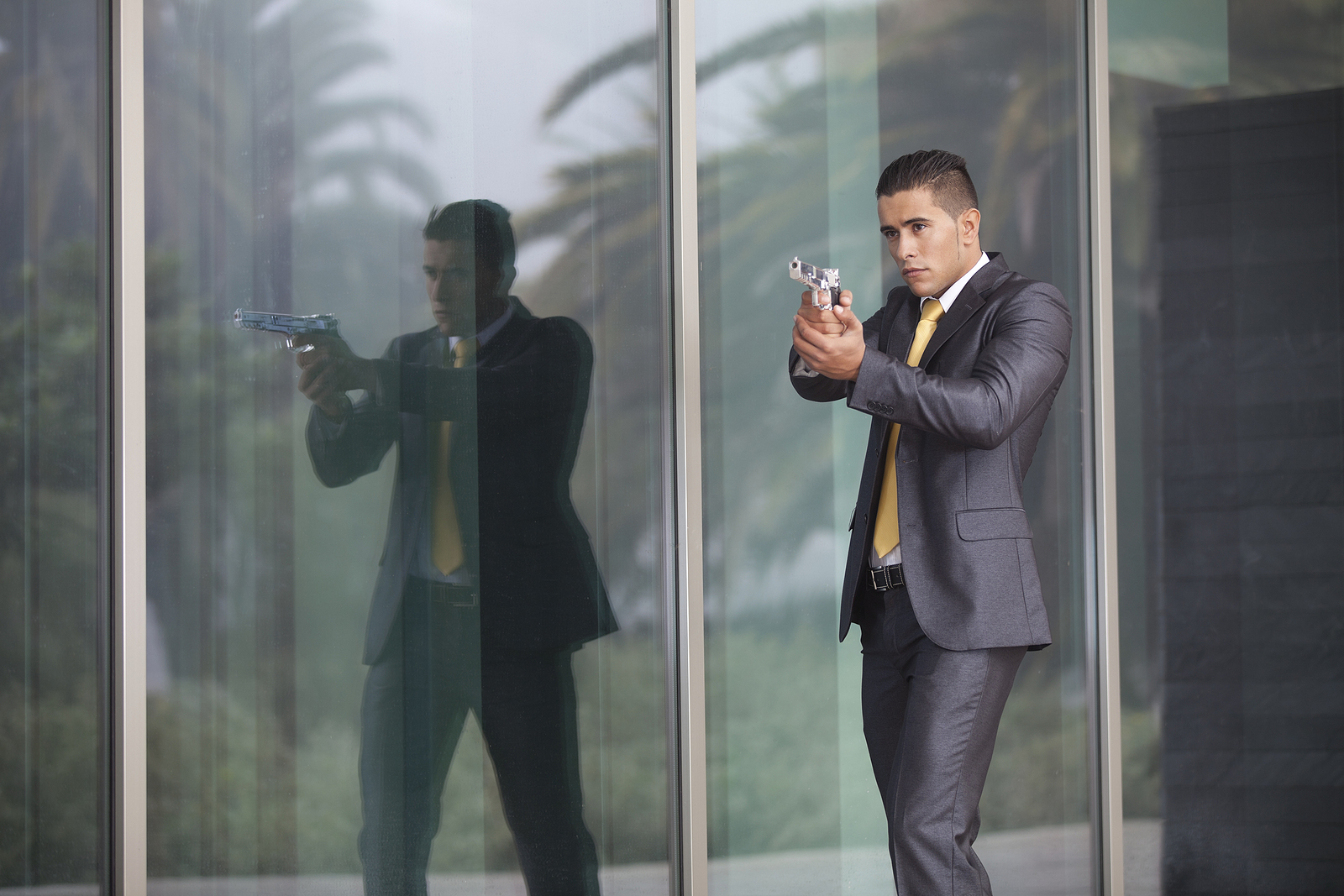 An article discussing an issue related to the training modules "Deescalating Disruptive Persons", "Basic Use of Force Laws" and "Active Shooter Response" in the Safety Member Certification program.[1]

* When David had the chance to kill Saul, he decided to not do it:
"The Lord forbid that I should stretch forth mine hand against the Lord's anointed: …" (1 Samuel 26:11).

* Jesus advised Peter to not be so quick to resort to deadly violence:
Then said Jesus unto [Peter], “Put up again thy sword into his place: for all they that take the sword shall perish with the sword” (Matthew 26:52).

There are choices to be made in every situation. When there is disruptive behavior, the choice is how to respond. If the disruption is violent and a Church Safety Team member is armed with a firearm, the choice may be whether or not to pull out the gun, then if the gun is drawn, whether or not to shoot. These decisions, made under stress, are most often second-guessed by persons not there. Even investigators may come to wrong or questionable conclusions, and a jury may have to decide whether a case is "beyond a reasonable doubt." Actually, the use of any weapon, even pepper spray or a Taser, may bring legal actions, civil or criminal.

In these news stories, was the use of a weapon justified?

Tarrant County, Texas, September 29, 2020 - A grand jury decided to not charge a church security guard with murder. On December 29, 2019, Jack Wilson shot and killed a gunman at his church in White Settlement. The assailant had already killed two church members during the Sunday morning service. Under Texas law, a homicide of any kind is investigated by a grand jury.[2]

Montgomeryville, Pennsylvania, April 24, 2016 - A young man visiting a church sat in an already claimed seat. He responded loudly when told that the place on the pew belonged to someone else. The pastor and an usher came, spoke with him, and he calmed down.

A middle-aged man, who was a self-appointed guard, then came to the young man with a drawn gun, displayed a concealed carry permit card, and demanded that he leave the service. The young man said the "badge" and the gun were fake, then threw a punch. The "guard" fired his gun and the young man died.

The "guard" was arrested and charged with murder.[3]

Indianapolis, Indiana, August 28, 2020, and April 27, 2021 - A security guard and the owner of a security services company responded to a disturbance at an apartment complex his company covered. A woman in a car had been in a loud argument with someone in the complex. The guard fatally shot the woman after yelling "gun!"

The guard was arrested and charged with murder. He claimed self-defense. A handgun was found on the front passenger seat of the woman's car, and he said that she tried to run over him and his employees with her car. The trial jury acquitted him.[4][5]

Chicago, Illinois, March 28, 2018 - An armed man, who was already a convicted felon, entered a church during a Wednesday night meeting. Brandishing a firearm, he said, "This is a robbery." A security guard intervened. The robber shot and wounded the guard, who returned fire, wounding the robber. The robber fled, but was shortly arrested by police. He was still in the hospital when his arraignment was held.[6]

Observing and participating in simulation training gives journalists and others insight into split-second police decisions:

Miami, Florida, November 2016 - A reporter for NBC Miami used a situation simulator in the Miami-Dade police training center. These scenarios were shoot/don't shoot situations. Once he failed to shoot when he should. In a traffic stop scenario, he "shot" the simulated drunk driver several times. He said this gave him better appreciation of what police officers face in deciding whether to shoot.[7]

Houston, Texas, and Phoenix, Arizona, January 2017 - In Houston, a Black Panther leader took part in a training scenario for police. In one situation, he squeezed the Taser trigger, not knowing what was in the hand of a "suspect." The Panther said he was so tensed up he would have shot no matter what was in the hand.

In Arizona, an activist pastor who'd led protests after a police shooting went through simulations in the Maricopa County police training center. In one scenario he fired when a man he tried to help rushed him.

Both activists came away with an appreciation for law enforcement officers' split-second decisions. They advised young people to be respectful and watch their moves when dealing with police and security.[8]

A person with law enforcement experience shared his evaluation of a news story of someone who fired a warning shot when he felt threatened:

Wheeling, West Virginia, October 2014 - A man and his fiancé were walking down the street after a Saturday evening "Sunday School" class. A group of adolescent males followed them. The couple alleged that the young men made them feel unsafe, especially when one moved toward them in what seemed a threatening manner. This individual expressed a desire to rape the woman and cut the man.

The woman called 911. The man took the woman's concealed carry handgun because she was too shaky to aim. He fired a warning shot into the air just as police were where they could see the scene. The man was arrested and charged with wanton endangerment. Police did not follow the nine young men, who fled when the shot was fired.

Jeffrey Denning evaluated the incident looking for how the "totality of circumstances" might bear on the case, depending on what the facts are. As far as he could see, there likely was not an imminent jeopardy which would justify displaying a weapon, let alone firing a warning shot, especially in an urban setting.[9][10][11]

The content of this article is discussed by Kris Moloney in a videocast on Sheepdog Church Security Academy (a YouTube channel) - the audio can be heard on a Church Security Roll Call podcast on SoundCloud.[12]

Under the video screen is a link to the Show Notes (an article summary) - you may have to click "see more" to reveal the link. The show notes for this article are available until the next article is posted. This is a downloadable PDF which can be printed and/or attached to a message to share with others. This can be for teaching, discussion of the subject, and persuasion.

Considerations in Use of Deadly Force

There are a few things to consider in deciding whether to use deadly force, such as the threat level, the avoidability of violence, sparing innocent persons, and the chance of success.

Our response to a crisis depends on several factors, one of which is the threat level.

Take for instance the news story in Montgomeryville. The threat level of the visitor's disturbance was low. It was a noisy objection to being told that someone else had the spot where he was sitting. The pastor and an usher responded reasonably, de-escalating the situation and restoring peace. If that was the furthest it went, there would have been an opportunity to win that young man.

The man who considered himself "security" for the church should not have had his gun drawn. There was no violence. The person had already been calmed down by the pastor and the usher. Showing the gun and the "badge" only escalated the situation and resulted in a death and a criminal charge.[3]

For us, we should not even draw deadly weapons unless facing a threat of deadly force. As Denning concluded his article, "[J]ust knowing how to shoot doesn't mean you should."[9]

Ideally, we should be able to avoid violence if we can. Even if threatened, we should try to avoid the use of deadly force. At least this is the logic of Duty to Retreat laws. Some of these laws are illogically rigid, such as one jurisdiction holding that if your home is invaded by armed persons, you should hide and not fire until fired upon (I do not know if that ordinance is still in effect). Nevertheless, avoiding deadly force is an ideal goal, especially in the church. However, it is not always possible.

How do we avoid the use of deadly force? Members of Church Safety Teams have an obligation to protect the people in the church, even at the risk of their own lives. If an attacker is already shooting, it's too late to avoid deadly force.

How can we avoid deadly force?

What was notable about the shooting at the West Freeway Church of Christ is the steadiness of Jack Wilson holding his gun. He waited for a clear shot, so innocent persons wouldn't be hit. Critics who say he should have aimed to disarm, not kill, are not taking into consideration that a head shot was the only viable option.

This shows the importance of not wounding innocent people while stopping a killer. Those using a firearm need frequent time on the range to keep their aim sharp. They also need situation scenarios to practice zeroing in on the bad guy with other people moving around - this is what builds steadiness, patience, and timing.

Let's be frank. You may have a gun, but it may not be the best option for you.

At the West Freeway church, Wilson was not the only security team member watching the guy with the fake beard. The other members were also watching him closely. When the man pulled a shotgun from his coat, the closest team member moved toward him while reaching for his concealed carry gun. He was just clearing leather when the killer turned and shot him. However, he was close enough to rush the gunman and tackle him. There was not enough time to shoot.

Maybe the shooter does not see you. Can you tackle him in less time than it takes to pull out a gun from inside your blazer or sweater and lift it to aim? Every half second longer it takes is time for him to shoot another victim, maybe two.

Don't leave your choice to chance. Prepare your mind and your responses ahead of time. Condition yourself for various situations where you will have to choose whether to shoot or not shoot.[15] Practice not only shooting, but other methods of stopping violent or potentially violent persons: verbal de-escalation, and unarmed control and self-defense moves. This leaves you with more options from which to choose.

In a situation with a threat of deadly violence, you may have to decide in a split second whether to shoot or not shoot. Prepare now to be ready to make that critical choice.

Quarter 1 of the 2022-2023 school year began on September 11. The next class is "Storms and Disasters" on October 23. Quarter 2 begins on November 13. The three training modules associated with this article are on November 30 and December 4 and 18.

This is the third of five articles for October, The other four are "1999 Temple Grounds Church Shooting" (Lesson Learned), "Do I Smell Smoke?" (In Case of Fire), "A Safe Distance" (Isolating Offenders), and "Blue Life Support" (The Cornelius Project).