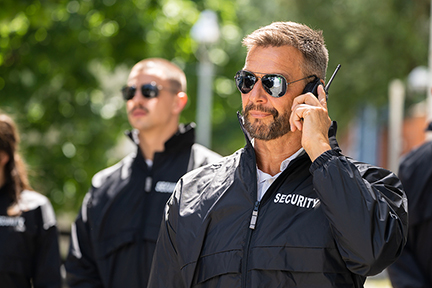 Based on the Safety Member Certification training modules "Active Shooter Response" and "Basic Use of Force Laws."[1]

Security in Bible times depended on persons trained and skilled in the art of war:

And when Abram heard that his brother was taken captive, he armed his trained servants, born in his own house, three hundred and eighteen, and pursued [the invaders] unto Dan (Genesis 14:14).

Among all this people there were seven hundred chosen men lefthanded; every one could sling stones at an hair breadth, and not miss (Judges 20:16).

They were armed with bows, and could use both the right hand and the left in hurling stones and shooting arrows out of a bow, even of Saul's brethren of Benjamin (1 Chronicles 12:2).

A key part of a company's sales training classes is role playing. Each person in the class practices selling the product or service. The prospective customer may be another student, or it could be the instructor using the questions or objections a sales representative is likely to encounter. Simulations are a proven form of sales training.

Before pilots begin flying a new commercial or military plane, they "fly" its simulator. That way they already know the controls and what that plane can do.

Training a Church Safety Team for various situations, such as verbal de-escalation, medical emergencies, evacuations, and active shooter incidents, should include drills with simulations.

Krugerville, Texas, January 2020 - A building in the business district of Krugerville hosts classes in church security. In addition to instruction, this includes role-playing and scenario enactments. Also covered are use-of-force laws. Skill sets include unarmed defense and control, verbal de-escalation, and active shooter situations. The number of churches having teams trained has increased since the November 2017 Sutherland Springs church massacre.[5]

Colorado Springs, Colorado, June 9, 2020 - Live drills with fake guns are used by Mountain Springs Church in training its safety team. This training also includes discussions about what level of force is needed in each scenario - often a "Shoot or not shoot?" decision.[6]

The content of this article is Kris's subject in a Sheepdog Church Security Academy videocast on YouTube. You can subscribe to this channel. The audio is in a Church Security Roll Call podcast.[7]

Beneath the video screen is the link to the Weekly Show Notes (article summary). This PDF download can be printed to share for discussion, teaching, or persuasion. The Show Notes for this article are available until the next article is posted a week later.

Simulation is a key tool for learning skills, ranging from football to sales. For active shooter response, this is beyond simple role playing. Drills should include enacting several scenarios which may occur in an active killer incident.

Train for the Location

By taking situational training at a training center, such as in Livingston Parish, Haslet, and Krugersville, you learn tactical shooter responses in general. However, there will most likely be some differences between that setting and your church. Even with only small differences, we need local active killer drills. That way, it is easier to apply what we've learned to the locations where we serve. Then we run through several possible scenarios for that setting. This makes the needed response quicker and more reliable.

Be ready for the unthinkable;

Titanic was not unsinkable.

One apparent fault in the police response in Uvalde, Texas, is that drills apparently did not cover a shooter coming in the back door or already in a classroom. Practice unlikely situations just-in-case. They might happen.

When planning an active shooter drill, there are a few questions to consider:

How and where is the killer detected?

Train for More Than One Role

I remember having to learn more than one part in school choir. I didn't have to sing the other parts in a concert, but it did help to relate my part to the others. When I heard another part, I still knew what mine should be.

That level of teamwork will help a Church Safety Team to act as a unit during an emergency, whether it be a fire, a disaster, severe weather, an attempted kidnapping, a mid-level disruption, or a violent incident (such as an active killer). Cross-training is essential. Since these incidents are not scheduled - at least not on our end - those of us who are there ought to be able to cover it. For instance, try to get as many people in the church as possible trained in life-saving techniques. What if the doctor, nurse, and EMT in the congregation are among the first victims? Who will do CPR or apply tourniquets while you're still engaging the killer? If a third or half of the congregation have been trained in CPR and Stop the Bleed, more lives can be saved.

What is it really like during an active killer incident? Can your team operate effectively in the chaos of the moment? In November 2021, Kris recorded "Stress Inoculation" - an interview with Carl Chinn.[8] Chinn went through the 1996 hostage situation at Focus on the Family and the 2007 shooting at New Life Community Church. He also studied the 2012 Aurora, Colorado, theater shooting.[9][10][11]

In the conversation, Carl describes the sensations encountered in the theater by responding police officers. The incident was covered by the two police commanders in a presentation which was then reported in a Calibre Press article, "Active Shooter: Coming to a Theater Near You? Advice From the Front Line."[12]

The sensations encountered in an active-killer situation are visibility, the sounds, the chaos, the smells, the atmosphere (including tear gas, OC mist, and smoke), and the sights. Then toss in issues of communication, inter-agency cooperation, logistics, and the psychological and emotional impact on the responders. Some of these should be present during drills to desensitize team members to stimuli that may hinder their response.

Visibility - In the Aurora theater shooting, the only lights on were the exit lights and images flashing on the screen. In this semi-darkness, those attending the movie were trying to get out, blocking incoming officers. There is no guarantee that a church shooting will happen in daylight hours. Not only that, but many churches now have theater-type worship centers with walls painted black and room lights off during the service, creating the same visibility issue even during daylight.

> Chinn's proposed solution is to have persons on the team and/or working with the team who know how to turn on room lights and turn off movie/video projection.

Atmosphere - In the theater, the assailant activated tear gas/OC canisters and smoke bombs. This made breathing and seeing harder and added to the confusion, making escape more difficult. Police had to put on their gas masks, and this impaired visibility even more.

> Tear gas and smoke is now used more often by mass shooters, such as in the attack on New Life Church. In some drills, use tear gas or smoke so the team can learn to deal with it.

Sounds -The theater was filled with cacophony*: the sounds of the movie, gunshots, people yelling and screaming, the stomping of feet, etc. Added to this was the noise of several radios on different channels talking at the same time. All this made it hard to hear, not only for officers in the theater, but also for 911 dispatchers.

* Cacophony: A combination of unpleasant and/or discordant sounds; from the Greek kakós (bad) + phónos (sound).

> Equip Church Safety Team members with good quality radios and wax-molded earpieces. Then the radios will be clear and the sound will go straight into the ear. Also, received communication will not add to the noise in the room.

> Those assisting with the lights (see above) can also turn off the speakers.

> Add noise to active shooter drills. The use of blanks will create gunshot noise without the bullets.

Smells - Besides smoke bombs, tear gas, and gun smoke, there are other, more unpleasant, smells. For instance, the stress on all concerned produces excessive sweat, but that's not all. Dying persons empty their bowels and bladders - a real stench - and also vomit. Then the smells of this, combined with stress, will make some living persons vomit. Add to this the smell of blood plus gas, smoke, amd substances in broken containers. What a smelly mess!

> For most of us, this calls for some real desensitization. Carl and Kris suggest placing buckets of foul-smelling stuff where drills are held so team members learn to focus on protecting people and neutralizing the killer in spite of the odors.

Sights - Human sights are the hardest to deal with. This includes seeing people who have been wounded or killed. Kris told of a younger officer who had a hard time watching a video of an autopsy. Not long after, Kris and this officer responded to a high-speed motorcycle accident. After seeing a mangled body up close and in person, the younger officer was thankful he'd first seen the video.

> Freshly-butchered animal parts and animal blood can be used to desensitize team members during a drill.

Logistics - Before and during a drill, see how easy or difficult it is for responders to do their jobs. Is the space where emergency responders will park their vehicles close enough to the door and kept clear, including the approach from the street? Police need to get in right away. Firefighters need room for their large vehicles. EMTs need to park close enough to a door so it's not too far to carry a patient to the ambulance - by the way, keep this spot open for medical emergencies.

> You can have some staff or volunteers play the parts of emergency responders. Better still, you can have law enforcement officers, firefighters, and EMTs participate in some of the active shooter drills then share their evaluations of the logistics.

First Aid Difficulties - Face it. A mass casualty event is more challenging than a single injury or medical event. Medical Team and Safety Team members have to work on their patients amid a mess. Firearm wounds, especially from high-powered or large-caliber weapons, are messier with lots of bleeding. Carl told of people practicing using a tourniquet on a pig's leg covered in blood. It was very slippery.

> A person volunteering as a live "gunshot victim" for a drill can have a limb covered with chicken blood for realistic practice.

Each Church Safety Team should have all is members trained and certified through the Safety Member Certification program. Two of its eight training modules are "Active Shooter Response" and "Basic Use of Force Laws." Three formats are available:

The first quarter of the 2022-2023 Online Events school year begins on September 11. Classes are on Sundays at 3:00 pm Central Time. Here is the schedule:

Drills should not only let us practice our skills together. They should also condition us for what we may encounter.

This is the fourth of five articles for August. The other four are "2017 St. Alphonsus Church Shooting" (Lesson Learned), "Moving Perception" (Patrol Procedures), "Youth at Risk" (Protecting Teens) and "A Library of Resources" (Worship Security Association).