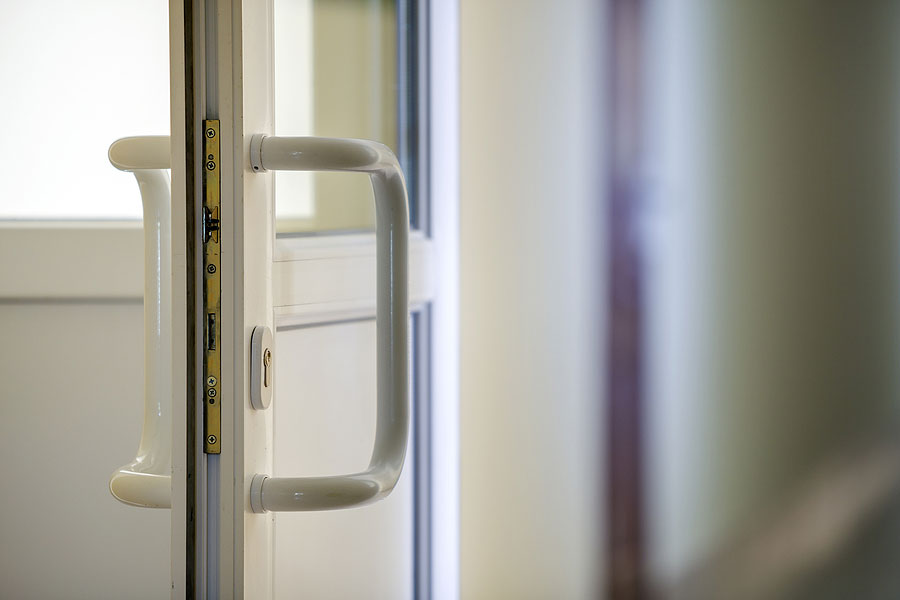 Therefore [Asa] said unto Judah, "Let us build these cities, and make about them walls, and towers, gates, and bars, while the land is yet before us ..." (2 Chronicles 14:7).

Sometimes, church doors don’t let intruders in. Sometimes they do.

Henderson, Nevada, July 21, 2021 – Between 12:30 and 1:00 am, two suspects tried to break in to a Henderson church through the back door. That attempt failed. At 5:30 they came back with pellet guns and tried to get in by shooting through windows near the front door.[1]

Muskegon, Michigan, October 12, 2013 – Shortly after midnight, a neighbor saw a man trying to pry open the door of a church. The would-be burglar was unsuccessful. When responding police arrived, he fled on foot, but was caught. Besides the pry bar, he had a hammer, a chisel, and a piece of wire.[2]

Chicago, Illinois, October 24, 2014 – Motivated by political opposition, vandals broke into the church of an activist pastor late on a Friday night. Damage included shattering glass, breaking a donation box, and stealing about $8,000. The rampage was preceded by hate messages and threatening calls.[3]

Queens, New York City, New York, December 5, 2021 – A church treasurer arrived at the church early Sunday morning to find the glass-paneled front doors shattered. Apparently a large rock from the landscaping was used. No larceny was discovered and no hate messages were received, so the motive is unknown..[4]

Walsall, West Midlands County, England, September 1, 2020 – A historic church in the market town of Walsall was the target of an attempted break-in. The would-be burglar couldn’t pry the door open or break it in, so a blowtorch was used to try to penetrate the thick, heavy wood. It started the wood burning, but it only smoldered. It was still smoldering the next morning when the church warden arrived. He quickly quenched the burning wood.*[5]

* Burglars in the United Kingdom are increasingly using blowtorches to break in by weakening locks so they will snap off. They also use them on hinges.[6] The use of blowtorches has come to North America.

The featured resources for March are for responding to active shooters. In addition to preventing burglaries and vandalism, secure doors and windows will stop a lightly-armed assailant and at least slow down a heavily-armed killer, buying time for an effective response and for law enforcement to arrive.

Sheepdog Church Security encourages Church Safety Teams to have all their members trained and certified through the Safety Member Certification program. The second of the seven training modules (courses) is “Active Shooter Response v4.” Three modes of training are available: Team Training (Classroom), Individual Training (Online), and Online Events (Live Zoom Classes for both individuals and groups). The 2022 Spring Semester of Online Events is already halfway through. The Fall Semester starts in October.[7]

This is an article in the Church Security Guide. “Church Safety Teams and Active Shooter Training” is a deep overview of responding to an active shooter, a good preview to the training module.[8]

This is a free downloadable resource. It has a brief coverage of active killers in churches. This is followed by a checklist for teachers, activity leaders, and office personnel on what to do in case of an active killer, whether it is evacuation or a lockdown. Click *HERE* to get it.[9]

Most burglars, vandals, and active shooters come into churches through doors or windows. The best defense is to close and lock these openings. But this procedure is of little effect if the intruders can easily break the door or window or force it open. Therefore, a secure window or door must be able to resist forced entry. The elements for consideration are the panel itself, the frame/casing, the hinges, and the latches and locks. All this needs to be balanced with its use as an emergency exit.

We naturally think of a sturdy entry door stopping intruders, and we are right. An exterior door should be able to resist forced-entry. However, in an office building, a school, or a church, so should interior doors. Luan doors (hollow with a thin wood layer on each side) are no better than paper or cardboard as a defense against an armed killer. Many men can punch a hole in one with their fists, so they’re no match for a firearm or a machete.

For wood doors, hardwoods, such as oak, are best. Soft woods, such as cedar or pine, are not as good. Painted wood is nice, but stained and oiled wood is easier to maintain against weathering.

Heavy-gauge steel on both sides makes a very tough door. A wood core gives it more resistance to gunshots and battering. It also holds the hardware more securely.

All-glass and metal-framed glass doors are commonly used for entry to public-access buildings such as churches and stores. They provide visibility and light. Tempered glass is available for entry doors and for windows in opaque doors. They resist both intentional and accidental impacts. An additional security consideration is security glazing, especially if the glass is not highly tempered – and even if it is. This is a coating that keeps the glass from shattering if it is broken. The same treatment is used for vehicle windshields. This means that a vandal, burglar, or assailant cannot get a hole big enough to come through with one blow or shot. This also applies to side windows by the door.

Just because a window is locked does not mean an intruder can’t use it to come in. If the window is where neighbors cannot hear it, a burglar will just break it to get in. If safety glazing is on ground-floor windows, the chance of neighbors hearing glass breaking is increased since it will take several attempts. Even better, is to have break-alert glass. Breaking the glass breaks wires in the glass. This triggers an alarm.

A small church in Dover, Ohio, was burglarized two or three times in the 1990s. The church upgraded their doors. The panes in basement windows were replaced with glass blocks, letting light in while resisting entry. The break-ins stopped.

For both windows and doors, the casing is often the weak point. What good is it to have an unbreakable door if the intruder can kick it in by breaking the casing or tearing it from the wall? Most door and window openings are framed by double studs. Fasten the casings to the wall with screws that go into the second stud.

Many times intruders break hinges and strike plates from the door casing. Most often this is because the screws are too short. Use screws that go into or through the stud.

An old trick to unlock a door without a key is to push the latch bolt aside with a plastic card. This is especially true for a self-latching door that opens to the inside, because the slanting part of the bolt faces the outside. But an intruder can use something to pull the latch on an out-swinging door. Have latch-guards on your doors to make them card-proof. Also use deadbolts when the building is unoccupied. They cannot be carded.

Fire codes specify that exit doors in public-access buildings should be openable from the inside without a key. One way to do this is to have door handles that can operate from the inside when the latch is locked. Also, have inside turn knobs on deadbolts. Doors without doorknobs should have panic bars – just push to open.

There are online resources which may help you with access control in general and doors and windows in particular. A few of these are “Securing Houses of Worship Around the World” by ASIS International (pages 2-3),[10] “Access Control: Churches and Religious Facilities” by VIZpin,[11] “Exterior Doors” in Whole Building Design Guide,[12] “6 Simple and Effective Ways To Strengthen Your Doors” on SafeWise,[13] and “Accessible Entrance” from the U.S. Small Business Administration.[14]

We like to feel secure, but that feeling should be based on reality. Doors and windows resistant to forced entry are a necessary step to securing that security.