Shut Out, Shut In 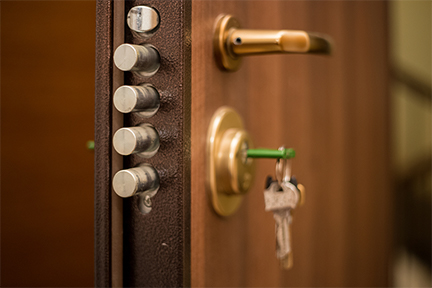 * Once the walls were built, Nehemiah had the gates closed at night for protection against their enemies:
And I said unto them, “Let not the gates of Jerusalem be opened until the sun be hot; and while they stand by, let them shut the doors, and bar them” … (Nehemiah 7:3a).

* The disciples closed the doors to keep their enemies out:
Then the same day at evening, being the first day of the week, when the doors were shut where the disciples were assembled for fear of the Jews, came Jesus and stood in the midst, and saith unto them, “Peace be unto you” (John 20:19).

"Katie, bar the door," is an old saying which generally means, "Trouble is coming, so take precautions." The most likely origin is an incident in Perth, Scotland, in 1437. Catherine "Kate" Douglas tried to save James II, King of Scotland, from a mob. The lock bar for the door was missing, so she used her arm. It didn't work - her arm was broken, and the mob came in and murdered the king.

This story points out the importance of locking a door to keep killers out. The door and the lock need to be strong enough to resist forced entry, but that won't work unless the door is closed and locked.

Yakima, Washington, April 16, 2022 - A Saturday evening service was in session when police officers came in and told the church to lock down. A man under a warrant for three charges (including for firearms) was fleeing police after they spotted him in the area. He was later wounded in a shootout with officers.[2][3]

Palm Beach Gardens, Florida, December 17, 2019 - On a Tuesday morning, someone spotted a "suspicious person" in camouflage in front of a church and its school and called 911. Police contacted the school and the church and had them both lock down. After a thorough search of the area, the church and school were given an "all clear."[4]

Antioch, Tennessee, September 24, 2017 - During the shooting at Barnette Chapel Church of Christ in Antioch, children in a class heard gunfire. They closed and locked the door, and a ten-year-old boy helped barricade it.[5]

Dothan, Alabama, March 26, 2021 - While a youth event was happening at a large church, a shooting victim was reported in the parking lot. Police contacted church security, who called a lockout. It turned out that the victim had been shot in both feet in a suspected road rage incident several blocks away. Shots fired into a car went though it into a third vehicle occupied by the victim, who was taken to the church in an uninvolved vehicle.[6][7]

This article, "Shut Out, Shut In" (Lockouts and Lockdowns), is covered by Kris Moloney in a videocast. The audio portion is in a podcast. You can subscribe to the videocasts on the YouTube channel "Sheepdog Church Security Academy." In the comment section beneath the video screen is a link to the Show Notes (article summary). These are available for one week.[8]

Fences and walls, doors and gates - these are barriers to keep animals or people either in or out of a space. For church safety & security, these are to protect persons inside by keeping out thieves, disrupters, and violent attackers,. While walls are fixed in place, doors can be open or shut, locked or unlocked.

While we're considering walls and doors, these need to be able to resist forced entry. This topic is covered in a previous article, "Strengthen the Gate" and its accompanying videocast.[9]

At the Right Time

Knowing when to unlock and open and when to close and lock is the key to having both accessibility and safety in the church. Since a violent attack is not a scheduled event (at least not on the church's calendar), we must be alert, discern when there is an immediate threat, and "bar the door."

In three of the news stories, activity outside the church (one with a school) resulted in lockouts (which news outlets continue to call lockdowns). In one story an active shooter was already in the church, and the occupants of a classroom locked down.

You're alert for threats both outside and inside the church. A threat is detected outside. It could be a man taking a rifle out of a car, an armed person trying to sneak up, a fight on the street, someone already shooting, etc. It's time for a lockout.

Lock all outside doors that are not already locked. If only the doors attended by safety team members or trained greeters are unlocked, all this takes is a call on the radio. If the church has an access control system, all it takes is to push a button. Call "Code Orange - Parking lot - Lockout" on the radio so the entire team knows what is going on, then call 911.

If the attacker is only using a knife or a machete, locking the doors should be all you need to do. However, most intentional mass killers use firearms. When a lockout is called, everyone should get where they will not be seen through windows, and all lights are shut off. If you are in the foyer with the lights off when the killer comes to the door, you can see him more easily than he can see you.

In a lockout, have more than one Safety Team member in the foyer ready to engage the attacker breaking in. Be ready to shoot from cover if needed. Have all non-team persons go where they can lockdown or evacuate. Medical responders can hide where they can come out when safe if needed.

If the threat is detected inside or an attacker is attempting to break in, call for a lockdown. Those who can evacuate will do so, but those who can't evacuate should lock themselves in their rooms. This especially applies to classrooms, offices, and some activity areas - any place where coming out of the room may make you a target.

In each room, someone locks the door. The best way to do this is to have door latches that remain locked, but can still be opened from the inside. Then if you're in the room (or went in to hide), all you have to do is close the door. It's locked. Barricade the door if you can. This makes it more difficult for an assailant to force his way in. It will also buy more time for everyone to go out a second door or through a window.

Turn off all lights. Hide from the windows, especially a window in the door. Shut off all mobile phones. Be quiet and still.

Wait for an all-clear from the police. If they're still looking for an attacker down your hall, you don't want to stick your head out the door.

If you have to have a lockout and/or a lockdown, it works better if you are ready for it. This takes preparation and practice.

Church Safety Teams are encouraged to have all their members trained and certified through the Safety Member Certification program. Three training formats are available:

Lockouts and lockdowns are covered in the training module "Active Shooter Response."[1]

If armed assailants attack the church, two defensive moves are shutting the attackers out of the church (a lockout) and shutting vulnerable persons in safe places (a lockdown). These measures put barriers between attackers and their intended victims.