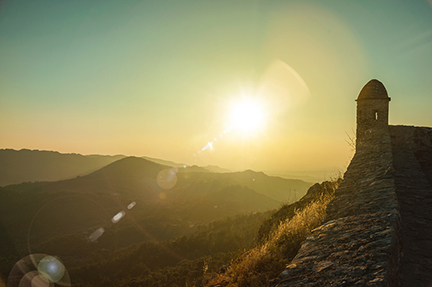 The Watcher on the Wall

One of the images that we can visualize of an ancient walled city or a medieval castle is men standing or walking atop the walls. Most times they are in armor, fewer times not. These are the watchers. Their duty is to watch, look out for danger, for a messenger or envoy, for merchants or pilgrims, or for those coming for refuge or help. From the top of the wall or a tower, a watcher could see miles farther than he could from the ground. Watchers were the ones who would notify the commander of an approaching army. Locally, they were the first line of defense.

When King David holed up in Mahanaim during Absalom's coup, the watcher on the wall informed him of messengers coming from Jerusalem (2 Sam. 18:24-27). When Jehu approached Jezreel, the watcher notified King Jehoram (2 Kings 9:17). Isaiah and Ezekiel used the analogy of watchers in their prophecies.

Watchers were held accountable. Lives depended on them warning the city's inhabitants or the castle's occupants of danger. If they sounded an alert, such as with a trumpet, the civilians could hide and the commander could mobilize a defense. When the enemy launched its attack, the watchers became defenders.

Ezekiel refers to the accountability of a watcher in detail:

The word of the Lord came to me: "Son of man, speak to your people and say to them, If I bring the sword upon a land, and the people of the land take a man from among them, and make him their watchman, and if he sees the sword coming upon the land and blows the trumpet and warns the people, then if anyone who hears the sound of the trumpet does not take warning, and the sword comes and takes him away, his blood shall be upon his own head. He heard the sound of the trumpet and did not take warning; his blood shall be upon himself. But if he had taken warning, he would have saved his life.

But if the watchman sees the sword coming and does not blow the trumpet, so that the people are not warned, and the sword comes and takes any one of them, that person is taken away in his iniquity, but his blood I will require at the watchmans hand (Ezekiel 33:1-6).

Likewise, members of a Church Safety Team are held responsible for the safety of those attending their church, whether members or visitors. If they detect an armed person approaching, they are to sound the alarm, then initiate the defense. We are discussing this in two parts: Strengthen the Wall and See the Danger. Another article covers closing the gate.

Figuratively speaking, you need a wall to stand on. In this case, this is the walls of the church building and any perimeter defense (such as fencing) and the means of watching.

No, I'm not kidding about fencing. I know of at least one church in Chicago that has a chain link fence with a gate around their parking lot. When the service starts, the gate is closed and latecomers have to wait to be let in. This is primarily because of auto theft in that part of town, but it is also an additional hurdle for a hostile intruder.

The Full Church Security Assessment, which comes with the Safety Ministry Proposal and Starter Kit[2], guides you in inspecting and evaluating all points of entry, which includes not only doors and windows, but also vents, service access, etc.

When services and classes are in session, the main doors should be Exit Only so no one can come in unless they are let in by the Safety Team member or Greeter/Door Attendant. This will slow down an attacker and give everyone inside more time to escape, hide, or take up defensive positions.

Also, create clear lines of sight for the watchers (Safety Team members) in the church to be able to see anyone approaching entry points around the church. Plan on this when building or remodeling. Trim or remove shrubbery and trees which block a clear view and provide intermediate hiding points for a stealthy intruder.

Install cameras positioned to cover critical areas of approach and the entry points. This includes inside cameras focused on the doors at head level.

The sooner we know that someone is attacking the church, the sooner we can respond. This means (1) seeing the attacker, and (2) identifying the person as an attacker. There are a number of ways to spot an attacker.

After most mass-shootings details about the attacker begin to come out in the news. If the person has been arrested, this is choked to a trickle since police and prosecutors don't want to endanger their chances of a successful prosecution. If the attacker is deceased, the revelations can be a flood. Frequently we hear, "Why couldn't he have been stopped earlier?" In another article in this series, "In the Crosshairs"[3], we discuss threat awareness and the role of threat assessment.

Most deadly attacks on churches have been by persons with a connection or some contact with the church. If the Threat Assessment Team is concerned about a certain person being at risk of violent behavior, they may keep a closer watch on him (if they can). Suppose they believe that this person is a potential threat of violence against the church or some of its members. They can pre-alert the Safety Team to keep a watch for this person and keep an eye on him if he is spotted (at the same time keeping this knowledge confidential). They may also alert authorities that they believe this person poses a direct threat to the congregation.

Suppose John Brown is the potential violent disrupter and you see him walking up to the door of the church. In most localities you cannot simply bar him just because you suspect he might be a danger unless you have a court order barring him or a No Admittance Notice following a previous incident where police have responded.

If you cannot bar him outright, you can observe him. What is his demeanor? How is he walking? Does it look like he has a weapon? If he is holding a firearm, edged weapon, or club/baseball bat in his hands, there's no question you can just lock the door and talk to him through the door speaker. But if he is concealing a weapon, you need to know how to look for the signs of one.

If you have received a warning from the police that he has threatened the church, there's no question you will lock the door. In that case, you should have extra team members in the foyer. Use the outside surveillance cameras to keep a watch at all angles.

Some attackers, such as the Wedgwood Baptist Church shooter, may not be already known by members of the church. On the other hand, whether they are planning to burglarize or vandalize the church or to launch a deadly attack, they may case the joint while planning their action. Learn to be aware of signs that someone is casing your church trying to find out how to successfully attack it (that is called "hostile intelligence"):

Use the windows in the foyer. Keep your eyes roving as you walk around, including looking out the windows. If you detect motion, look long enough to know what it is. If someone is darting from one hiding place to another, radio "Code Orange. Outside in front. 9-1-1."

Always be aware of people coming in the door. Train yourself to notice certain signs in a glance, such as objects they carry, suspicious bulges, furtive manner, etc. Do they look angry or disturbed? Of course, if they are dressed all over in black with a mask on, that is certainly suspicious!

Other articles in this series are "In the Crosshairs" (Churches as Targets), "Bar the Door!" (Lockouts and Lockdowns), and "Killer Down" (Neutralizing the Attacker).