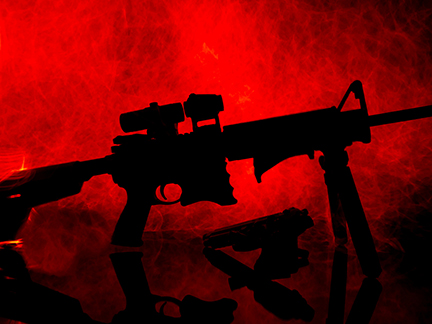 For strangers have risen against me; ruthless men seek my life; they do not set God before themselves. Selah (Psalm 54:3).

Bloodthirsty men hate one who is blameless and seek the life of the upright (Proverbs 29:10).

Beloved, do not be surprised at the fiery trial when it comes upon you to test you, as though something strange were happening to you (1 Peter 4:12).

The motives of the attackers differed, but the effects were deadly.

Daingerfield, Texas, June 22, 1980 - A man who faced trial for rape killed five in a church and wounded ten others after church members declined to be character witnesses for him at his trial. The motive was thought to be revenge.[2]

Fort Worth, Texas, September 15, 1999 - A man barged in on a mid-week youth rally and began shooting. He killed seven, wounded others, then shot himself, all the while spewing anti-Baptist slurs. The motive appears to be anti-Christian hatred.[3]

Arvada and Colorado Springs, Colorado, December 9, 2007 - A young man who five years before was not allowed to continue in a YWAM program because of "strange behavior" killed two and wounded two at the YWAM center in Arvada in the pre-dawn hours. He later killed two and wounded two in the parking lot of a Colorado Springs church. He killed himself in the church foyer after being wounded by an armed security team member. The presumed motive was resentment from his dismissal.[4]

Charleston, South Carolina, June 17, 2015 - A young man with White supremacy sentiments joined a mid-week Bible study in an African-American church. When they closed their eyes to pray, he pulled out a handgun and began shooting, killing nine. Motive: racial hatred.[5]

Antioch, Tennessee, September 24, 2017 - A former member of a church returned years later with guns. He killed one member in the parking lot, shot at others inside, wounding a few. More would have been killed if he hadn't been stopped by an usher who confronted him. Since leaving the church, he had come under the influence of Black supremacists. The attack was to avenge the Charleston shootings two years earlier.[6]

Sutherland Springs, Texas, November 5, 2017 - Domestic violence led to the death of 26 members of a small church. The assailant had a history of violence, which led to his imprisonment then discharge from the Air Force. For some reason, this record was not reported to the FBI as required by law, so he was still able to buy firearms. The motive was domestic discord with in-law hatred.[7]

New, but Not New

The rise in violence against places of worship in the United States and Canada has caused a rise in concern for the safety and well-being of worshipers. However, this is not really new in history and around the world. Christians have been the target of non-believers for almost two thousand years, and the people of Israel for that long before then. Tolerance and religious liberty are rather new concepts in society.

Meanwhile, as freedom of religion was being established in Europe and North America, persecution has continued in other parts of the world. The influence of Great Britain and the United States moderated this, fostering a greater degree of liberty in many countries. However, modern forms of persecution also emerged under Fascism and Communism.

Now with the decline of American and West European dominance, traditional resistance to Christianity across the globe has returned to violence. At the same time, anti-Semitism has resurged. Within Western Europe and North America, Judeo-Christian spiritual and social values have declined in acceptance as their societies have secularized and atheism has increased, leaving churches and synagogues, as well as religious institutions in general, to be viewed as targets of opportunity.

Christian churches are still the most targeted. Whereas criminals once hesitated to break into a church, let alone attack it, now they are more emboldened to target places of worship, not just for theft, but for vandalism, arson, and massacre.

Peter told his readers to not be surprised by attacks (1 Peter 4:12). Since we are at odds with the viewpoint of the world around us, attacks are to be expected.

Keeping Safe in a Perilous World

The growing threat to churches, which has accelerated since 2007, has spurred a growing awareness of church security. Many congregations have started church safety teams under various names (Safety Ministry, Security Ministry, Eyes & Ears, The Watchers, Sheepdogs, Safety Patrol, etc.).

As the church safety movement has grown, it has come to encompass other areas of safety for the flock. These include concerns more immediate and frequent, such as medical response, fire safety, child protection, severe weather preparedness, and theft prevention. Yet there still remains the concern for security, such as responding to violence, calming disruptive persons, and unarmed self-defense. Related to these is knowing and adhering to use-of-force laws.

Proverbs 27:12 says, "The prudent sees danger and hides himself, but the simple go on and suffer for it" (italics mine).

To see danger means to be aware of it. This is not just seeing someone dressed in black holding an AR-15, but becoming aware that a certain person is a highly potential threat to the church or some of its members. In four of the six news stories above, the active killer had some connection with the church and/or its members.

Part of the Full Church Security Assessment is a Risk Assessment. What are the risks of fire, flooding, vehicular accidents with hazardous materials on their road, severe weather, or any of a number of risks the church could reasonably expect with their situation and location. This kind of assessment is usually no more frequent than annually.

On the other hand, Threat Assessment is an ongoing process. Members of church leadership, the pastors, the Safety Committee, etc. constitute a Threat Assessment Team, either formally or informally.[8][9] This follows the advice of Solomon, who said, "Know well the condition of your flocks" (Prov. 27:23).

The team is a discrete group. What they share stays confidential. Team members share what they know about persons in or connected with the church if it may indicate a person is at risk of disruptive behavior. Often what is shared is not an isolated incident, but part of a pattern. Other team members may know of something similar. The real question is what to do if someone shows patterns of behavior or attitudes which may lead to violence. Some cases will need investigation and research.

Let's look at three of the incidents cited above:

Take for example the Sutherland Springs killer. They knew him. His wife grew up in that congregation. Her mother and grandmother still attended there. Not long before the shooting, he attended a Fall event at the church. His behavior made those who knew him uneasy. He had written a threatening letter to his mother-in-law.

In Tennessee, the congregational leaders had apparently lost any means of knowing what was happening with their former member. In hindsight, some interest in where this young man was and what he was involved in would have been prudent. But did a small congregation have the means to carry this through? However, if someone had said, "I just saw [or heard about] ___ and he was ___," this could have prompted questions.

On the ministry side, how far does our care and concern extend for once-active members who have left?

In Daingerfield, TX, the killer had attended that church in the past. According to some accounts, he had become an atheist. The circumstances of his leaving the church and leaving his position as a teacher were not reported, but considering later charges this raises the question of character issues.

He was scheduled to go to trial the next day for rape and incest. The man had asked several members of the church he used to attend to be character witnesses for him at the trial. All declined.

This should have been enough for someone to say, "We'd better keep a watch on him." At least today, that could be the case. Most churches did not practice threat assessment 39 years ago. Sadly, most do not today.

Neither did they have a Safety Team member in the foyer to intercept intruders. If they had seen him approaching dressed in battle gear and carrying a rifle, they could have locked the door and had someone go into the office to call the police (or dial "0" for the operator).

This is not intended to denigrate the churches involved. We should be sympathetic while learning lessons from these tragedies.

We are aware of the news. We know that churches are now targets for all kinds of violent persons. Motives include, among others, racism, religious hatred, violence-prone individuals, personal vendettas, resentment, and a desire for infamy.

Since we are aware of the danger, we should be watchful, preparing to protect ourselves and others.

Other articles in this series are "On the Wall" (The Watcher's Duty), "Bar the Door!" (Lockouts and Lockdowns), and "Killer Down" (Neutralizing the Attacker).