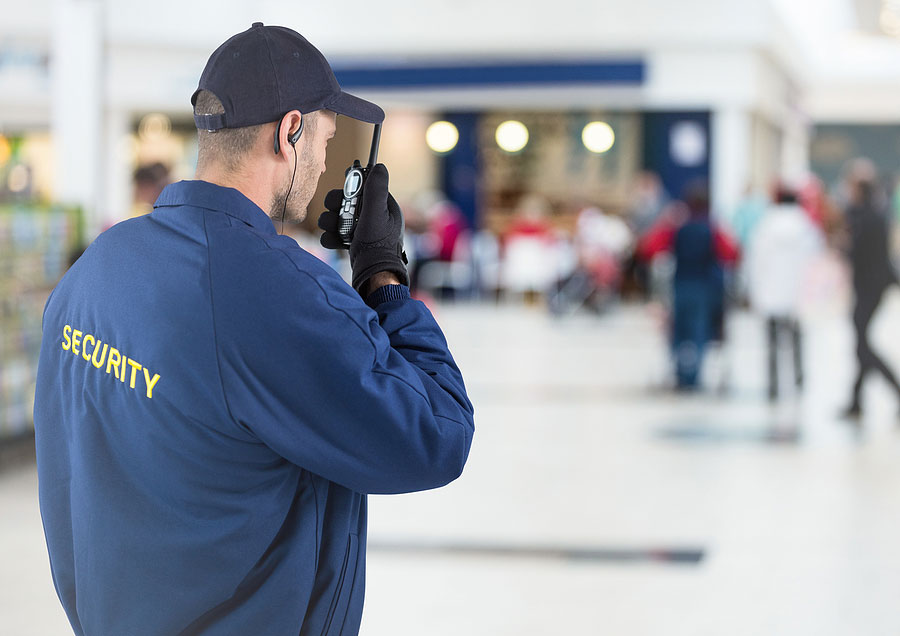 An article in a series on Unarmed Self-Defense featuring the training course Basic Use of Force Laws v4.[1]

They shall guard all the furnishings of the tent of meeting, and keep guard over the people of Israel as they minister at the tabernacle (Numbers 3:8).

Let everyone beware of his neighbor, and put no trust in any brother, for every brother is a deceiver, and every neighbor goes about as a slanderer (Jeremiah 9:4).

Knowing how to duck, hit, grab, or throw is not the first step in self-defense. It is being aware of everything around you so you won’t be blindsided.

No one wants to be blindsided, especially by a real threat of death or serious injury. According to Merriam-Webster, to blindside someone is to hit them unexpectedly from the blind side. For a person who is blind in one eye, the blind side is the side of the blind eye. It has come to mean the direction where a person is not looking.[2]

In most of these stories, the defenders might have fared better if they had been more alert before being attacked.

San Leandro, California, December 22, 2016 – About 12:30 in the morning, a man coming home from work was talking on his phone while walking from his car to his apartment. A person hiding in bushes and carrying a knife with a 10” blade jumped out and tried to take the man’s phone and wallet. The man resisted, and fought the robber. While wrestling for the knife, the robber was stabbed.

Grand Rapids, Michigan, January 25, 2017 – Three robbers knocked on the door of a home about 4:30 am. When the occupant answered the door, they forced their way in and demanded cash. He grabbed a machete to defend himself, hitting one robber. Another knocked the machete away, and the defender pinned him to the wall, then one of the robbers shot him. The robbers left before police arrived.[4]

Seattle, Washington, March 5, 2017 – A woman runner stopped at the public restroom in a park. While washing her hands, she sensed something and turned to see a man in the restroom. He attacked her, and she fought back, using recently learned self-defense skills. She eventually escaped from the restroom and, with the help of a passer-by, locked the assailant inside to await responding police.[5]

Lynchburg, Virginia, August 16, 2017 – A man walking along a street about 1:30 am was attacked by three men. He had a knife, so he pulled it out after being knocked down and defended himself, wounding two of the assailants. The third fled. All three suspects were apprehended.[6]

Sterling Heights, Michigan, December 3, 2017 – A woman walking her dog late at night became suspicious when she noticed a man dressed in black exit a vehicle and start to follow her. She continued walking, and the man disappeared, only to pop up again from behind a trash can, this time closer with “something silvery” in his hand. When he reached for her and couldn’t grab her coat, she pulled out her concealed handgun, poked it into his belly, and said, “I don’t want to kill you.” That was enough for him. He turned and ran away.[7]

Here is a really usable resource for a Church Safety Ministry, the Safety Member Training Record. It is an Excel file with three tabs:

The template can be copied into added tabs, one for each Safety Member. Name each tab for the member whose record it is to make it easy to find. This way, you have the training record for each Safety Ministry member in one file.

To get this resource, click *HERE.* If not already subscribed, you be signed up for the weekly email update and the monthly newsletter, The Church Guardian.[8]

There’s safety in knowing what is going on. And knowing comes from being aware of your surroundings. This is called “Situational Awareness.” Situational awareness or the lack of it counts in the news stories above:

Situational Awareness is taking notice of your surroundings, of who and what is there, of whether anything seems unusual or out-of-place, and of changes in your surroundings. Your perceptions may be informed by previous knowledge of individuals, of situations, of what is happening in your area, and of notifications concerning threats or persons at risk. Thus situational awareness consists of knowing what is around you (All-Around Awareness), your level of alertness (Levels of Awareness), and how your mind processes the situation (Dynamic Awareness).

If you are on an upper level, this is spherical awareness, adding the 180º below you for 720º total.

All-Around Awareness means not just staring at one spot, but moving your eyes, head and body and using peripheral vision. For safety/security work in a church, this also includes awareness extenders, such as the two-way radio, public address system, weather radio, public alert systems, and surveillance video monitoring.

The level of awareness is how alert a person is and how ready to act. This is important, because no one can remain indefinitely at the highest level of alertness and readiness to act. They have to let down or burn out at some point. Therefore, our level of alertness and readiness to act depends on the situation we are in. Of course, when tornado sirens are blaring, the ground is shaking, or an armed intruder is shooting, we are at the highest level. Then in the evening we unwind, let the tension drain out, and relax enough so that we go to sleep when we get into bed. 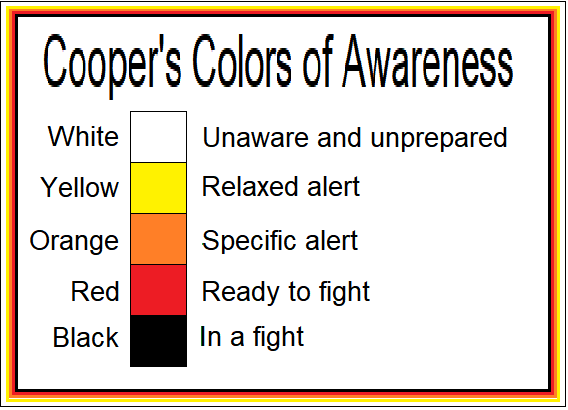 Maj. Jeff Cooper, USMC (Ret.) boiled down alertness (readiness for action) to four levels, named by color, from White to Red. The Marine Corps added a fifth level, Black.[9] They are as follows:

Let’s describe this in a church safety scenario:

You are on duty in the vestibule of the church. Almost all the adults are seated in the sanctuary. The service has begun and the main door is set at exit only. You are at Level Yellow, somewhat relaxed, but paying attention to what is going on.

A latecomer rings the bell. He appears safe, at least unarmed, not boiling mad but seemingly calm. You let him in. He does not go into the service, but sits in a chair in the vestibule. You visit with him. More than being friendly, you want to find out why he remains in the vestibule. His name sounds familiar. Oh yes, the last name of a mother in the congregation with a school-age child. Your yellow level borders on orange. You wonder, “Is this her estranged husband, the father of the child?”

The singing ends. Grade-school children in the service come out and head down the hall to Children’s Church. Your level is Orange, and as you stand by the line of children, one eye is on the man. He stands up as he watches the children. When the child of the mother comes out, the man steps forward and calls the child’s name. The child stops and says, “Hi, Daddy. Why are you here? I didn’t think you were coming to church. Mommy’s in there” [she points back to the sanctuary].

“Grandma’s sick, Sugar, and wants to see you,” he says.

This is Level Red. You have decided on a tactful way to intervene and stall what appears to be a parental abduction. Meanwhile, you’ve already called the team member in the sanctuary and texted him to bring the mother out while you stand between the man and the door.

Situational awareness as a constant thought process moving from observation to action in a constantly renewing cycle may be called Dynamic Awareness. It is what is needed in a dynamic (constantly evolving) situation. Another military veteran, Col. John Boyd, USAF, evaluated and described the cycles of thought used by successful fighter pilots.[10] This is known as the OODA Loop.[11] OODA stands for Observation, Orientation, Decision, Action.

This is not only a recurring loop; it is also loops within loops since the observation and orientation are continuous processes. This describes the continuous decision-making process so well that the OODA Loop is used not only by the military and security agencies, but by corporations and organizations.

Since situations are often in flux, Dynamic Awareness is an essential practice for church safety teams.

Situational Awareness and the Use of Force

Situational awareness is integral to knowing what level of force to use and how to use it. For unarmed defense, as we’re defending ourselves we have to constantly compensate for our opponent’s moves. If an escort hold does not work, we may have to go to an arm bar, or even a takedown. However, sometimes the subject becomes cooperative and we decide to not escalate the force.

Training for situational awareness has some instruction, but is mostly coaching, mentoring, and drills. For instance, two safety team members are watching people come and go. The mentor says, “That man over there, what do you notice?” The trainee sees a suspicious bulge, the way he is walking, or some other indication of what the man may be thinking and doing. Another person comes in with a scowl, and one team member asks another, “What’s with that scowl?” Sometimes a formal drill is set up where someone plays the part of a suspect hiding a weapon, etc.

Situational awareness is brought up in the Sheepdog Church Security training course Security Team Fundamentals.[12] Its role is not limited to self-defense, but is essential throughout the work of a Safety Team member, such as on patrols. Situational Awareness is a facet of the training in other SDCS courses, since it is the key to knowing what to do in specific situations.

The Worship Security Association has a library of training videos. Some of these, such as Suspicious Behavior Training (Responding To Suspicious Activity), specifically cover the use of situational awareness. Your Church Safety Team can access these videos through Sheepdog Church Security’s affiliate relationship with Worship Security Association.[14]

Be ready to protect yourself and others and not be blindsided. Learn Situational Awareness and use it while on Safety Team duty and in your daily life.

There are three other articles for June. They are “An Abundance of Counselors” (Worship Security Association), “The Third Level” (Empty-Hand Control), and “The 2005 World Changers Church Shooting” (A Lesson Learned).