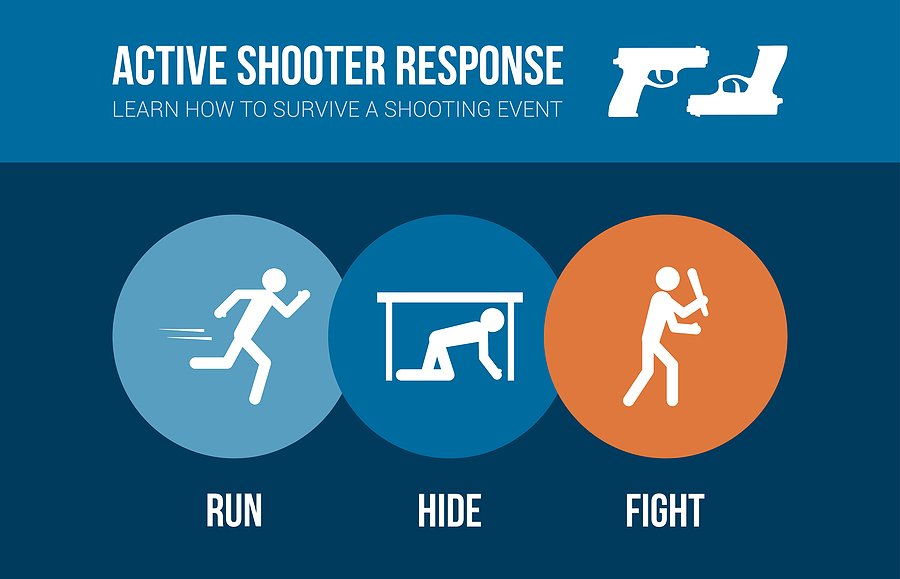 An article in the series “Responding to Active Shooters” based on the Sheepdog Church Security training course Active Shooter Response v4.[1]

Most of us have seen Run, Hide, Fight, the training video for an active shooter response.[2] When we can’t run and can’t hide, and we’re facing the shooter, we fight. As a Safety Team, we don’t run or hide, but stay between the killer and the flock. When we’ve already called for a lockdown, how do we deal with the killer himself? One way or another, the threat must be neutralized.

Boise, Idaho, September 5, 2021 – It was late Saturday night, the wee hours of Sunday morning, at a music venue in Boise. The music had ended, musicians were packing up to go, and fans were still hanging around. An intoxicated individual tried to get in through the back door. He got into scuffles with band members and made shooting gestures with his hand. But that wasn’t enough. He went to his car to get a gun and came back. A bass player for one of the bands took notice and watched the intruder. When the intruder pulled the gun from his waistband, the bassist lunged at him. The intruder fired from his pocket, hitting the bassist in the leg, then ran off. Police soon apprehended him.[3]

Pelham, New Hampshire, October 6, 2019 – Two events were scheduled for a church in Pelham that Saturday, a wedding in the morning and a funeral in the afternoon. The wedding was interrupted and the funeral postponed.

A man came into the wedding with a handgun. He shot the pastor and the bride and hit the groom with the pistol. Just then, the wedding guests gang-tackled him and held him for the police. The congregation had recently received active shooter training. None of the injured died.[4][5]

Antioch, Tennessee, September 24, 2017 – As people were beginning to leave at the end of the Sunday morning service, a gunman opened fire in the parking lot, killing one member, and entered the church shooting. An usher confronted him and wrestled him for the gun. The gunman went down when the gun fired, hitting him in the thigh. The usher handed the attacker’s gun to someone to guard the shooter while he went out to retrieve his own gun from his vehicle.[6]

Tumwater, Washington, June 17, 2018 – A small-town pastor’s Father’s Day message was on “Manning up” and getting involved when needed. That afternoon, he and his family were in Walmart in Tumwater. They heard gunshots. The pastor made sure his family was out safely. Then the gunman came out and attempted to hijack a car, shooting the two occupants. He went to another car and forced the driver out, wounding him.

The pastor, who saw this, drew his concealed weapon and fatally shot the robber/murderer/carjacker. He then treated wounded victims.

The suspect had a violent criminal record. He had driven to the store in a hijacked vehicle. The shots heard in the store were from him shooting off locks on the ammo cabinet.[7]

Broward County, Florida, October 10, 1993 – A man with a gun walked into a Sunday morning service, heading for the pulpit. The pastor retreated. After the gunman reached the pulpit and turned to face the congregation, he was tackled by choir members. They tied him up with neckties to wait for the police.[8]

Featured training is the Safety Member Certification and Group Coupons for Additional Students. The free download is the Active Shooter Lockdown Checklist.

A member who passes all seven courses can take the Safety Member Certification Test. The particular course relating to this article is Active Shooter Response v4.[1]

Our free download is the Active Shooter Lockdown Checklist. Following a brief discussion of active shooter incidents is a one-page checklist to be copied and posted in every occupied room (essentially every room except the utility room, storage rooms, and closets). Click *HERE* to get it. It has what to do to evacuate, to shelter, and when once clear.[11]

From Here to All Clear

Once an active killer event has begun, it is the duty of the protectors (the Church Safety Team) to bring it to an end. This is neutralizing the threat. It can be with the killer captured, incapacitated, dead, or gone. Sometimes the killer leaves, as in the Greater Oaks Missionary Baptist Church (2001), Our Lady of Peace (2002), and the Ministry of Jesus Christ (2006). Sometimes the shooter commits suicide, especially when wounded, as at New Life Community Church in Colorado Springs[12] and at First Baptist Church in Sutherland Springs.[13] The shooter can be tackled[4][6][8] or killed.[14] He may just give up, especially if only one or a few persons were his targets.

An active killer may be stopped by the intended victims or by the Safety Team.

When the Sheep Attack the Wolf

In the video “Run, Hide, Fight,” if you can’t run and can’t hide, and the shooter comes to where you are, then fight. There are a few ways of doing this: Ambush, Barrage, Swarm.

One or two people hide to the side of a doorway waiting for the shooter to come through. When he has passed them and they are behind him, they attack him, aiming to knock him down and knock the weapon loose. At the very least, this distracts the killer, giving others in the area an opportunity to act, but these unarmed persons can capture or incapacitate him.

Those in the room raise a ruckus. They yell, wave makeshift weapons, and throw whatever can be thrown at the attacker. A heavy object, such as a glass paperweight, can cause a lot of bodily damage, and may disable the attacker, depending on how hard it is thrown and where it hits.

A video on the web shows a rooster and a goat fighting off a hawk that was attacking a hen. They swarmed the hawk. So it is with the intended targets of an active killer. They can turn tables on the attacker by swarming him. In two of the above news stories, people in the church tackled the gunman as a group, using their numbers to their advantage.[4][8] In two of the news stories, an individual not on the Safety Team stopped a shooting,[3][6] which also happened at Our Lady of Peace Catholic Church.[15]

Stopped by the Safety Team

The goal of the Safety Team is to save as many lives as possible. Generally, team members are divided into two roles, containment and engagement.

Containment is keeping the active killer out of special areas. The first goal is to protect people in occupied areas of the church, such as the childcare area and Sunday School classrooms. The second goal is to limit the killer’s range of motion so that he cannot escape the engagement team.

Containment team members find places where they can fire from cover downrange from the killer. If he comes into their cone of fire, they can stop him or drive him back. The killer may become trapped between the Containment Team and the Engagement Team in a fatal funnel (where he cannot move and cannot escape).

The Engagement Team goes after the active killer. Some killers commit suicide when they are trapped, such as the shooter in the 101 California Street shooting in San Francisco, who shot himself when he saw police coming up the stairs.[16] A few may surrender. Some shoot it out until they are killed.

Here is where training and practice pay off.

First plan what to do using “What if?” questions, such as:

These scenarios bring up another “What if?” question: “What if we spot the shooter as an active threat before a weapon is seen? This was the case in White Settlement, Texas.[14] The assailant was spotted as a person of concern by the security team when he came in the door and they kept track of him.

So what do we then do? A safety team member approaches the individual with the intent of engaging him in conversation, potentially disarming him emotionally with verbal de-escalation. Other team members are positioned for backup. The first team member is close enough to knock away any weapon as it is being withdrawn.

Train team members in how to face an active killer, whether they are armed or unarmed. If you are armed, you may not have time to pull out your concealed weapon. If you can get it out, you need the skills to know when to shoot, to be able to shoot in a crowd without hitting bystanders, and to shoot accurately. This involves more than mere target practice, even with silhouettes. Armed safety team members need training and practice in tactical shooting. Shoot from a variety of positions. Shoot from cover. Shoot a moving target. Shoot between and around obstacles. Reload quickly.

As a team, practice several scenarios in drills. Take turns playing different roles. Sometimes you’ll be on the containment team, sometimes in engagement. You can’t predict what your position will be at the start of an incident. Be ready for anything. Oh yes, spend time on the firing range.

What if It Did Happen?

An active shooter event in a church will have legal consequences. Face it. Even if everything was done right, to the best of your knowledge and skills, someone is likely to be second-guessing. It seems there is always a Monday morning quarterback somewhere. Even with no second-guessing, there are investigations of every incident involving lethal-force, especially if someone is wounded or killed.

Take for instance the Security Team leader who shot the gunman in White Settlement. The case had to go to a grand jury. Months later, they decided that he should not be indicted for anything. In the meantime, he had to have an attorney to be ready for any charges, no matter how far-fetched, which might result. Attorneys are not cheap.

If you are involved in an active shooter incident, you can have an attorney available through Sheepdog Church Security’s affiliate relationship with U.S. LawShield. This membership organization was formed to provide legal representation for those who use firearms legally. If a member is involved in a use-of-force situation using a lethal weapon, one call puts them in touch with lawyer.[17]

“Hope for the best. Be ready for the worst.” We hope an active shooter never comes to our church, but realistically, we should be ready to stop one if he does.