The 2002 Our Lady of
Peace Church Shooting 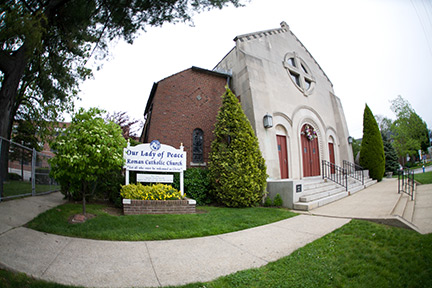 The gatekeepers, Akkub, Talmon and their brothers, who kept watch at the gates, were 172 (Nehemiah 11:19). ~ Temple gatekeepers were selected to live in Jerusalem after the wall was rebuilt.

A Day of No Peace for Our Lady of Peace

For a long time, churches had been open and welcoming institutions in their neighborhoods, even in large cities and their suburbs. Anyone could walk in to meditate or pray. That's how it was at Our Lady of Peace Catholic Church in Lynbrook, New York on Long Island about two miles east of JFK Airport. Then the peace was broken.

On a Tuesday morning, March 12, 2002, a handful of parishioners gathered for the 9 o'clock mass. In came a visitor, someone no one there knew. He parked his car in front of the church, came inside the front door, left and came back again. Standing in the vestibule, he fidgeted for a while. As the priest finished his homily and turned around, the visitor entered the sanctuary, pulled a .22 rifle out from his trench coat, lifted it to aim, and shot the priest in the back. Then he shot an elderly woman praying in the front pew.

The next four shots hit no one. A former Marine and Vietnam veteran had grabbed the rifle and was wrestling the gunman for it. He had been watching the visitor the entire time and rushed to intercept him when he shouldered the rifle.

Having lost his weapon, the gunman ran out of the church and to his apartment only a block away. The priest and the woman died, but they were the only casualties.

Off Meds, off the Wall

The shooter, a man in his mid-thirties, was a paranoid schizophrenic who had been released from a mental hospital. He had been unable to hold down a job since his release and had just lost his last one. Apparently, mental health caseworkers either lost track of him or failed to follow up, and he had stopped taking his medications.

The killer had graduated from an all-boys Catholic high school about six-to-eight miles from the church. A blogger sharing a New York Times article stated that the shooter "was victim of pedophile priests." However, although the NYT article highlighted the "death list" found in the shooter's apartment and mentioned his high school, there was no mention of sexual abuse. It did describe his behavior in college and in places he had lived, and it is consistent with mental illness, especially paranoid schizophrenia.

Whatever his motive was, he had a "death list" of musicians and others who led in worship at the church just a block away from his apartment, even though he did not know any of them personally. It seems that this church was targeted because it was the nearest one. Before moving to that neighborhood, he had roomed in a town to the east and attended the local Catholic church there. We do not know about his encounters with priests while a youth, but in 2002 sexual abuse by priests was big news, and a paranoid schizophrenic could have put himself into the stories.

The murder weapon was purchased with a stolen credit card the day after the killer had lost his job. He signed the NCIS form for a background check, and it cleared. This was in spite of his involuntary commitment to a mental health facility and his violation of a restraining order for domestic violence. At that time, many local jurisdictions did not always forward information to the national database. Some still don't. In reference to this case, a 2003 post on a mental health support website said, "But it was [his] lawbreaking acts of domestic violence that would have put him on the NICS database" (we hid his name).

More people would have been injured or killed had it not been for one person, Gerald Denk. The former marine was standing in the back of the sanctuary off to one side where he could see the vestibule through an interior window. He had seen the gunman enter, leave, and return, and kept his eyes on him.

When the visitor pulled out his rifle, Denk ran into the vestibule through a side door, raced around to the main door, and charged the gunman from behind. After Denk had taken the rifle, the gunman ran out the door, up the street, and into the building that had his apartment. Denk followed.

Police arrived, surrounding the building. The killer held out until the police stormed the apartment. He attacked an officer with a knife as he was being arrested.

How did those on the scene react? What was the legal resolution of this case? And what changes in safety and security were made by the church?

Church members tried to help the shooting victims, but they died. The school adjoining the church was locked down. Denk and another parishioner (an off-duty policeman) followed the killer to his residence a block away. Responding police were able to besiege the suspect until arresting him. The school lockdown was maintained until the killer's arrest.

Since the pastor-priest had been killed, the diocese provided an immediate temporary replacement. Several months later, a permanent priest arrived who held the congregation together and helped them heal from the hurt of the attack.

The killer was tried for murder, attempted murder, and assaulting a police officer the following year. This was after being found competent to stand for trial. He refused to let his attorney enter an insanity plea, and tried to blame his neighbor for the shootings. However, the evidence against him was solid, and he was convicted. He is serving life sentences in a state prison. If he had allowed the insanity plea, he could have been indefinitely confined to an institution for the criminally insane, essentially the same sentence in a different setting.

There is no public mention of safety and security measures established since the shooting. Neither has there been a similar incident. However, the church's Facebook page has videos of Sunday masses taken by a set camera. This suggests that there may be other cameras in place. Besides enabling members who cannot attend to be able to view a service remotely, knowing that cameras are watching may be a deterrent to some. Not publicly disclosing other security measures may be intended to keep them confidential.

Each page on the parish website, Our Lady of Peace Church carries this notice: "VOLUNTEER BACKGROUND SCREENING - Please CLICK HERE for a volunteer background screening update." This links to: Background Screening Update [of] The Office for the Protection of Children and Young People. With this much in place, it would not be a far step to train greeters and ushers in church safety & security, as is now done in many other Catholic churches.

The lesson learned in the 2002 Our Lady of Peace church shooting is Watch the Gate. Levites served as gatekeepers in the Tabernacle, the First Temple and the Second Temple. There were enough of them to always have watchers at each gate. Anyone entering the Temple grounds knew they were being watched. Being Levites, they were officially part of the ministry.

Most churches have greeters at the doors where attenders come in - at least before the worship service begins. Welcoming people to the church is a ministry, but there is more potential than just giving a smile and handing out bulletins. Greeters can answer questions and give directions. They can also be eyes and ears, noticing the demeanor of those coming in, observing behavior of those in the foyer/vestibule, and hearing sounds in general and some things that are said.

The incident at Our Lady of Peace would have been even more tragic except for the watchfulness of one person. Gerald Denk was standing in the back corner of the sanctuary during mass, where he could see through the interior window into the vestibule. He noticed the behavior of the young man who came in and did what he could when the rifle was pulled out.

Since the shooter was not personally known to people at Our Lady of Peace and he was not on the public radar, those in the church could not have watched out for him specifically. But someone observing his behavior and mannerisms did become suspicious enough to keep an eye on him. If a greeter or safety team member had stayed in the vestibule that morning, then:

The lesson learned: Watch the Gate.