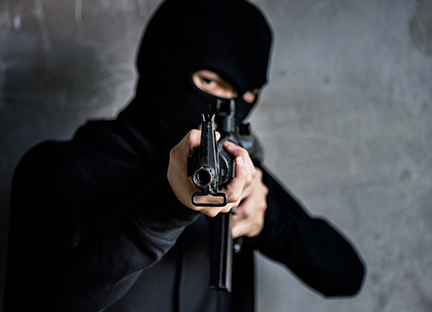 If a thief be found breaking [in], and be smitten that he die, there shall no blood be shed for him (Exodus 22:2).

The Lord shall cause thine enemies that rise up against thee to be smitten before thy face: they shall come out against thee one way, and flee before thee seven ways (Deuteronomy 28:7).

... in the day that the enemies of the Jews hoped to have power over them, ... The Jews gathered themselves together in their cities ... to lay hands on such as sought their hurt: and no man could withstand them; for the fear of them fell upon all people (Esther 9:1b-2).

He delivereth me from mine enemies: yea, thou liftest me up above those that rise up against me: thou hast delivered me from the violent man (Psalm 18:48).

Ready Houston, the emergency management agency of Houston, TX, produced the video Run, Hide, Fight, which is now hosted by the U.S. Department of Homeland Security to teach ordinary people how to respond to an active shooter. If an active killer came into your church, most persons there should either run or hide, but fight if confronted by the gunman.

The role is different for members of a safety or security team. Rather than run or hide, they must engage the killer. Whether you're a safety team member or just a congregant, when you confront an active killer you are face-to-face with the evil they intend to do.

There have been several deadly attacks in churches where people in the church engaged and stopped the assailant. Here are six of them from 1980 to 2022.

Dangerfield, Texas, June 22, 1980 - A former school teacher burst into the sanctuary of the First Baptist Church in Daingerfield on the Sunday before his trial for sexual imposition. Dressed in military attire and heavily armed, he shouted, "This is war!" and began firing. After he'd wounded several, two ushers grabbed him in a double bear hug and forced him outside. All the while he fired a pistol, fatally wounding them. Three of those wounded inside died, bringing the death toll to five. Had it not been for the ushers, there would have been more fatalities.[2]

In 2012, HeartStone Pictures released Faith Under Fire, a docudrama of the incident and how those in the church and the community dealt with it over the next ten years.[3]

Colorado Springs, Colorado, December 9, 2007 - A young man who had killed two persons and wounded two others at the Youth with a Mission (YWAM) training center in Arvada, returned home, then later drove 70 miles south to the New Life Community Church in Colorado Springs. Meanwhile, police executed a search warrant on his home. They warned the New Life security team that the YWAM shooter might target the church.

At New Life, about 12 hours after the YWAM shooting, the attacker waited until people began leaving the morning service. He set off smoke bombs he'd placed by entrances and began shooting in the parking lot, killing two sisters and wounding two others, including the girls' father. Then he entered the church, where security team members were waiting for him. One shot and wounded him when he raised his rifle to fire at another team member. He then took his own life with his handgun.[4]

Antioch, Tennessee, September 24, 2017 - A former member of Burnette Chapel Church of Christ pulled into the parking lot and waited for the service to end. He shot and killed a woman who had just left the service, then went in firing, wounding six. An usher rushed the shooter and wrestled him for the gun. It fired, wounding the gunman who was then held for police.[5]

White Settlement, Texas, December 29, 2019 - A man in disguise came into the West Freeway Church of Christ and sat down. During Communion, he stood up, pulled a short shotgun from his coat, and killed two men. The security team leader took out his pistol, aimed, and waited for a clear shot. He fired once, downing the gunman six seconds after he'd pulled out the shotgun.[6]

Nashville, Tennessee, November 7, 2021 - While people were at the altar near the end of the evening service at the Nashville Light Mission Pentecostal Church, a man sitting in front stood up, went to the pulpit, and waved a handgun while shouting. The pastor, who was praying with someone, got up and tackled the gunman from behind. Other members moved in and held the man down until police arrived.[7]

This service featured a pastor who'd just returned from Taiwan. Following the service was a luncheon with the pastor. The visitor locked the doors, then pulled out a handgun, threatening congregants. One member, a doctor, rushed him. The gunman fired several rounds, killing him. The pastor grabbed a chair and hit the gunman. Others tackled the assailant, then tied him up with extension cords.[8]

Kris discusses the subject of this article in a videocast on the YouTube channel Sheepdog Church Security Academy - the audio is in a podcast. You can subscribe to this channel to not miss any videocasts. Beneath the video window is a link to the Show Notes - an article summary. This is a PDF you download. It can be printed and shared with others. The Show Notes are available for one week - until the next videocast is posted.[9]

When Evil Invades the Sanctuary

Murder is evil, so when someone intent on murder enters the church, evil has come into the sacred place, the sanctuary. Whoever confronts this intentional killer comes face-to-face with evil.

How people confront the killer depends on their role and their situation. We'll classify people as congregants and the Church Safety Team.

When it is known that an active killer (shooter) is in the church, the primary response for those who can is to evacuate. If they cannot evacuate in time, then they are to hide. If in a room that can be locked and/or barricaded, then this is a lockdown. If the killer comes into where they are, it's time to fight.

First distract and confuse the shooter. Yell and scream. Throw any objects you can. Pick up something to strike him. Then swarm him - numbers are on your side. Tackle him. Grab his arms. Someone wraps their arms around his legs. Do whatever it takes to stop the shooting (or swinging the knife or machete). Notice that defenders used firearms in only two of the six stories.

The Church Safety Team separates into two groups, the Containment Team and the Engagement Team. Your role will depend on where you are at the moment.

Containment - The containment team might not all be in the same place. They put themselves in place to keep the killer from going into certain areas, such as child care and nursery, Sunday School classrooms, the Senior Center, etc. If they can, they position themselves where they can fire from cover. They can wait for the killer to come around a corner.

Engagement - This unit tracks the killer, ready to return fire. They will push the killer into a fatal funnel where he cannot escape. If he's still firing, they can follow the sound. If gunshots have stopped, that does not mean he is down. He might be waiting for them to come around the corner, so they proceed with caution. If the hallways are covered by cameras, the team member monitoring them can let them know where he is and if he's still an active threat.

If the killer gives up (maybe his gun jammed), be prepared to restrain him with zip ties or handcuffs. If there are casualties, medical response will be given when safe to do so.

Training and Drilling - Safety teams need to train for containing and engaging an active killer.

What will you do if you find yourself face-to-face with an active killer in your church? How will you engage him?

Every member of a Church Safety Team is encouraged to be trained and certified though the Safety Member Certification program. Those who take all the courses and pass each certification test are Certified Safety Members for two years. Among the training modules is "Active Shooter Response v4." A course in Mass Trauma Response will soon be added.[1]

Training is available in three formats:

Related reading material is the Church Security Guide article "Church Safety Teams and Active Shooter Training." It is an overview of active shooter response which can be used to prep for the training module and later be a refresher.[10]

This is the second weekly article in July. The other three are "2017 Sutherland Springs Church Shooting" (Lesson Learned), "The Who's Who of Child Safety" (Identifying Sexual Offenders), and "Categorically Dangerous" (Hurricane Safety).