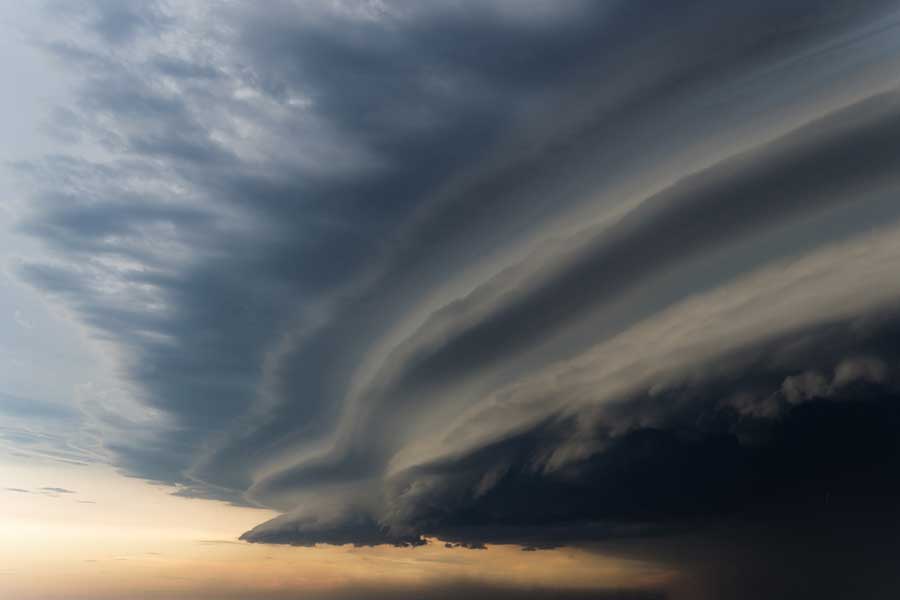 The Bible does not specifically mention hurricanes or tropical storms, but it does tell of large storms (or tempests), some of which may have been hurricane strength.

* We feel like this when a hurricane is coming:
I would hasten my escape from the windy storm and tempest (Psalm 55:8).

* The ship Paul was on was wrecked by a large storm:
And when neither sun nor stars in many days appeared, and no small tempest lay on us, all hope that we should be saved was then taken away (Acts 27:20).

Hurricane season has already begun. It is expected to peak in late August or early September. Most of the impact of hurricanes is felt along the Gulf Coast and the Atlantic Coast, especially in the South. However, hurricane force storms can strike further inland, and tropical depressions (as hurricane remnants) can cause extensive flooding, as TD Camille did in 1969. Then there are extratropical cyclones and arctic/subarctic cyclones, such as nor'easters and polar vortexes.

The week before this article was written, a large, powerful storm system moved across the country. In Ohio, strong straight-line winds with gusts of up to 130 mph in places (Category 4 hurricane force) caused extensive damage. Thousands of households over a large area were without power, some for the rest of the week. In rural areas, this meant no water, since the pumps couldn't work. Mobile phones could not be charged except in vehicles. Stores ran low on common batteries used for lights (AA, AAA, C, and D). Many generators were sold. Some people with power or generators were letting friends without power use their freezers.

Fourteen years earlier, in September 2008, the remnant of Hurricane Ike traveled north from Texas. When the leading edge reached Lake Erie, it regained hurricane strength, causing a lot of damage with power outages lasting many days.

This is to say that hurricanes and their remnants can cause a lot of destruction and disruption, and not only where they make landfall. Churches need to be ready to protect themselves and serve their communities when threatened by hurricanes, as well as hurricane-strength storms, even indirectly.

Louisiana, August 27, 2020 and August 29, 2021 - Laura and Ida, two Category 4 hurricanes a year apart, damaged churches in Louisiana to varying degrees. Some buildings were destroyed, some survived with serious damage, and others had moderate to light damage. All were inconvenienced. Still, they found ways to help not only their own members, but also members of the community. These churches were also prepared for hurricanes. For instance, United Methodist congregations had secure digital copies of their records on file with the conference, and the conference helped congregations with cleanup and rebuilding.[2][3]

Belton and Houston, Texas, August 26, 2017 - Thousands of people fled north as Hurricane Harvey approached the South Texas coast. When it made landfall near Corpus Christi, many of the refugees had found shelter in churches. For example, in Belton, about 30 miles north of Austin, the Church of Christ set up folding beds in its gymnasium, and the First Baptist Church also made accommodations for displaced persons.

These and other churches had already planned and prepared for mass-evacuation emergencies. They had procured supplies (including folding beds) and trained volunteers to meet the needs of those fleeing disasters.[4]

Atlantic Coast, United States, October 6-8, 2016 - Hurricane Matthew, which had been Category 5 when it hit several Caribbean islands, was Category 4 when it reached Florida. Brushing the Florida Coast, the center stayed over water and closely followed the coastline as it headed north, gradually weakening. Along the way, it took down power lines in several states, pounded coastal areas with storm surges, and flooded inland areas. Churches in low-lying areas cancelled Sunday services. Churches on higher ground and further inland provided shelter to evacuees and housed rescue and relief workers.[5][6][7]

Kris discusses the subject of this article in a videocast on the Sheepdog Church Security Academy channel on YouTube. Subscribing to the channel will keep you up-to-date on the videocasts. The audio is in a podcast on the Sound Cloud channel Church Security Roll Call (CSRC).[8]

Below the video screen in the comments section is a link to the Show Notes (article summary), a downloadable PDF. This can be printed and shared. This download will be available until the next article is posted a week later.

Dangerous in any Category

Hurricanes and other large ocean-bred cyclonic storms could hit anywhere along the Gulf Coast and the Atlantic Coast of the United States. All states on the Gulf Coast and Atlantic states from Florida to North Carolina are at high risk for hurricanes, but they have hit Virginia (as did Fran in 1996), and can stay just off the coast clear up to New England. The Long Island Express hurricane in 1938 was Category 3 when it hit.[9]

More recently, in 2012, Hurricane Sandy raked the East Coast, then came ashore in New Jersey, causing shore erosion and widespread flooding. It traveled west northwest to Lake Huron, merging with a nor'easter on the way, bringing wind and rain far inland. It was wide enough to drench much of New England.[10]

Four years before that, in 2008, Ike followed an inland path north from the Texas coast, becoming an extra-tropical cyclone. It regained hurricane strength in the Great Lakes region. With a diameter of over 400 miles, it brought hurricane force winds to Missouri, Kentucky, Illinois, Indiana, and Ohio, and continued into Canada.[11]

Arizona is not exempt from hurricane impacts. From 1921 to 2018, remnants of 50 tropical cyclones, 34 of them hurricanes, reached the state. Almost all were Pacific storms. Ten of them were tropical storms when they arrived, eight were tropical depressions, and most were remnant lows.[12] The most recent remnant was from Pacific Hurricane Nora in 2021. These systems brought heavy rain and flash flooding.[13]

Considering the record, a large portion of the United States has a chance of being affected by a hurricane and/or a nor'easter. The effects are wind damage (most severe near landfall), lightning and hail, tornadoes, storm surges and extreme high tides, excessive rain and flooding, landslides, power, telephone, and cable outages, and blocked roads. A hurricane can really be several kinds of hazardous weather in one large package.

The function of risk assessment is not only seeing the likelihood of a certain event, but how severe it will likely be and the kinds of hazards it brings. For instance, if your church is on or near the Gulf Coast or Atlantic Coast, both the likelihood and severity of a hurricane are large, especially high winds, storm surges, and torrential rain. The likelihood of heavy rain extends further inland.

Knowing what the church is most likely to face, and which severe hazards have at least a medium likelihood, you will know what to plan for. Some hazards may also come from other threats, such as thunder storms, tornadoes or winter storms. For instance, there are several potential causes of power outages.

Also plan how to help refugees from hurricanes and other storms.

Not every church building is in need of construction. If your congregation is planning a new building, include making it storm-proofed for the most likely weather systems. If you make it safe for an EF2 tornado, it might be hurricane-safe up to Category 3. If your church is in a high-probability hurricane landfall zone, Miami-Dade standards are recommended. Very revealing are aerial photos of damage by Hurricane Michael. Among flattened and shredded buildings were structures still standing intact. Design and construction do make a difference.

Needed improvements may be made to an existing structure. Some retrofitting may make the building more survivable.

If the church is where hurricane evacuees are likely to seek shelter, you may make places on the church campus, such as a gym, more suitable as a mass shelter. This could include higher-capacity restrooms, areas for showers and changing clothes, and food service facilities. Also include storage areas for equipment and supplies.

Of course, this all depends on the church's financial situation.

Get the equipment and supplies needed in case of a hurricane or its remnant. Many of them are useful for other emergencies, so the cost is justified in more than one way.

Depending on the level of a storm threat to the structure, the church may also need tools for removing debris and re-opening storm shelters.

If the church offices are destroyed or flooded, vital records may be lost. They could be lost in other disasters, such as a fire. Have copies of the church's legal, financial, personnel, membership, and insurance records, either physical or digital, filed off-site in a place likely to be safe from a strong storm.

Train staff and volunteers on what to do (including record keeping) when there is a storm warning, when the storm hits, and after the storm. This includes the Safety Team, pastors, office and custodial staff, teachers, and group leaders, as well as those who volunteer specifically for storm relief work.

Some church members might not be available to volunteer for regular tasks in the church because of work schedules or other responsibilities, but would volunteer for storm relief work, including helping sheltered evacuees. These may need to be trained individually or by twos or threes. This training includes orientation in where the equipment and supplies are and how the facilities are to be used - for persons already skilled in shelter care, this might be all they need.

"Severe Weather and Natural Disasters" is a training module in the Safety Member Certification program. All Church Safety Team members are urged to be trained and certified through this program. It is easier to coordinate several persons and sub-groups when all have received the same training. Three training formats are available for the Safety Member Certification program: Team Certification (Church-hosted classes), Individual Certification (self-paced online courses), and Online Events (live Zoom classes for teams and individual members). This training module could be audited by others who would plan for and respond to such an event.[1]

The Church Security Guide article "Preparing for Natural Disasters" covers many weather events: hurricanes, earthquakes, floods, landslides, tsunamis, thunderstorms, tornadoes, winter storms, and volcanoes. It also advises on essential emergency supplies, backing up records, getting information on how to shelter people, and planning how to continue ministry if the church building is destroyed.[14]

Now that it is hurricane season, what if one comes your way? How do you prepare for and respond to a hurricane?

This is the last weekly article for July. The others are "2017 Sutherland Springs Church Shooting" (Lesson Learned), "Face-to-Face with Evil" (Engaging an Active Shooter), and "The Who's Who of Child Safety" (Identifying Sexual Offenders).