Laws on Defense of Self and Others: What do laws say about self defense and defending others? 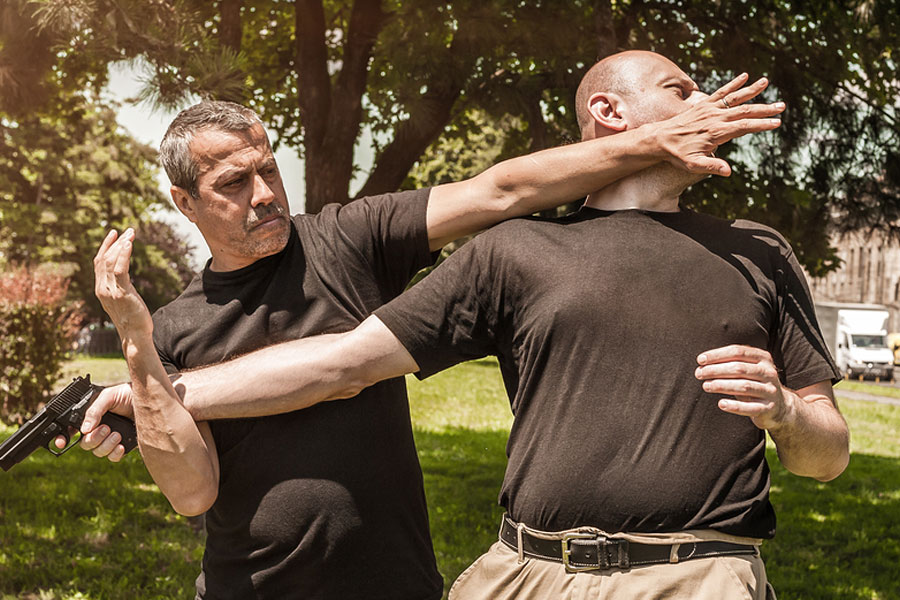 You shall select cities to be cities of refuge for you, that the manslayer who kills any person without intent may flee there.” ~ Numbers 35:11

“Moreover, you also know what Joab the son of Zeruiah did … whom he killed, avenging in time of peace for blood that had been shed in war… Act therefore according to your wisdom, but do not let his gray head go down to Sheol in peace." ~ 1 Kings 2:5-6

This series is based on the Sheepdog Church Security[1] downloadable Training Bundle[2] Protecting Yourself and the Church with Use of Force Laws v3[3] and the Online Security Guide[4] chapter Use of Force and Citizen's Arrest Laws[5].

Is This Self Defense?

Don Riggs, on duty with the Safety Team, was stationed in the foyer by the corridor leading to the Children’s Department. He recognized Millie Rogers’ estranged husband, Bob, heading his way. The Safety Team had been advised that there was a custody dispute in the pending divorce case.

“Then that means she’s in here. I wanna see her.”

“You may not see her without Millie’s permission.”

Bob’s face soured. He became argumentative, loud, and agitated, gesturing wildly with his hands. Don tried to calm him with verbal de-escalation, but Bob became more agitated. Then Bob raised his right hand high with the arm extended. Don hit Bob’s raised arm, then forced him to the floor.

“You can try,” Don answered, “This is self defense.”

Was Don right? Was this self defense? Below are questions for discussion.

We have seen these lines in news stories and/or headlines:

- Not guilty by reason of self defense.

- The shooter was not charged because it was self defense.

- Coroner’s jury rules justifiable homicide by right of self defense.

The Right of Self Defense

For thousands of years, most people have had the right to defend themselves and others. Notable exceptions have been slaves and prisoners. This right has been so generally recognized that most often it has not been codified.

Nowhere does the Bible say directly that you have a right to defend yourself and your family. But there are examples of self defense. However, the Bible does indicate some distinctions.

In Numbers 35:9-34 and Deuteronomy 19:1-10, the Law specified that cities of refuge be designated where a person who killed another unintentionally could flee to be safe from an avenger. One example given in the Law was accidental death. The killer’s negligence would earn him years of being restricted to the city, but not a death penalty.

The law goes on to give examples of intentional killings which would be classified as murder, the basis for denying refuge to the murderer. These are based on intent, especially when pre-meditated. Somewhere between accidental death and murder is self defense, un-named, but a likely appeal for refuge. If you were reacting to an attack, there was no prior intent. It was up to the avenger to prove otherwise to the “court” of the city of refuge.

David urged his son Solomon to judge Joab for murder. He had killed Abner in revenge for killing Joab’s brother in self defense during a battle. Joab lured Abner to come outside the gate of Hebron (a city of refuge), then stabbed him.

In the New Testament, Paul and the writer of Hebrews make it clear that revenge is not acceptable (God will judge and avenge). This certainly means revenge is not self defense. It should be obvious that self defense is preventing harm to oneself and others, but revenge is “getting even” after the fact.

In England the right to self defense has been part of Common Law – unwritten customary laws which are recognized and upheld by courts.

What Counts as Self Defense?

A person must be facing an imminent threat – immediate and present. This corresponds to “clear and present danger” in the area of national defense. This is not, “It may happen sometime in the future.” And it is not in the past. It is real and now. In the story above, did Bob pose an imminent threat to Don?

The person must reasonably believe that there is a threat and that it is imminent. Was Don’s belief that Bob posed a threat reasonable?

This is a guard against excessive force. The saying “An eye for an eye” refers to the Old Testament Law (Lev. 24:17-20). In a lawsuit, judgment was to be in proportion to the injury. The same principle applies to self defense. As a negative example, Lamech, the 3rd great grandson of Cain, boasted that he exacted revenge 77 times every injury (Gen. 4:23-24), extremely disproportionate. Was Don’s defense proportionate?

Two categories of self defense laws at opposite poles are Duty to Retreat (17 states) and Stand Your Ground (24 states). When it comes to defending one’s home or business against an invader apparently intent on harm, most states (27) have some form of the Castle Doctrine in law. Nine states have neither Stand Your Ground nor Duty to Retreat laws.[6] Eight of these have Castle Doctrine laws, leaving only Colorado as a Common Law Self Defense state.

According to Wikipedia[7], “In criminal law, the duty to retreat, or requirement of safe retreat, is a legal requirement in some jurisdictions that a threatened person cannot stand one's ground and apply lethal force in self-defense, but must instead retreat to a place of safety.”

Seventeen states have the Duty to Retreat (DTR) law in one version or another. Where they differ (other than minor variations in wording) is the point at which the defender no longer has to retreat. In each state, this is ultimately determined in the courts through rulings in individual cases, but at some point, there is no option left but to act in self defense.

“Retreat” is more than just leaving the scene. Practically, it may mean moving to a more defendable position. It also includes attempts to dissuade or calm the attacker, such as with verbal de-escalation. Did Don do what he could do to evade Bob’s threat?

Whereas the Duty to Retreat is a requirement for defenders, a Stand Your Ground (SYG) law is permissive. It allows persons to defend themselves without first withdrawing if threatened with violence.

SYG laws came under national scrutiny after the 2012 Sanford, Florida case where a 17-year-old young man was killed by a community block watcher. However, some claim the SYG did not apply, since the shooter claimed that he was being assaulted with no chance to retreat.

SYG was ruled by a court as not justifying deadly force in another case. In this instance, the killer had initiated an argument over the victim’s behavior in a movie theater.

If the incident in the story above was in a SYG state, would Don’s response be justified?

The Castle Doctrine is an affirmation of one’s right to self defense by any means up to and including deadly force when one’s home is invaded by a person or persons with criminal intent, including burglary. This was specifically recognized by the English law expert Blackstone. The concept is that a place where one has the primary “right to be” is inviolable, and any invasion of this space is a capital crime which may be resisted with deadly force. Castle Doctrine laws vary from state-to-state.

In some states, there is an initial Duty to Retreat before resorting to forcible resistance. Most simply affirm the right to defend one’s home or workspace, but limit this to coming inside the dwelling, office, or shop. For instance, the Castle Doctrine does not permit you to shoot someone ringing your doorbell or stepping off the street onto your walkway or driveway, unless they are already engaged in deadly hostile actions.

Castle Doctrine laws are classified as either “strong” or “soft.” Colorado is the only state without either DTR or SYG law to not have a Castle Doctrine statute.

Does the Castle Doctrine apply in churches?

Self Defense Laws and the Church

It pays for members of a Church Safety Ministry to be familiar with the laws of their state regarding self defense and how they apply to the ministry’s activities. The Castle Doctrine would certainly apply to resisting and neutralizing an active shooter.[8][9]

But applying Duty to Retreat or Stand Your Ground requires more than just knowing the wording of the law in your state. It also involves how court cases interpret the law.

Legal advice and knowing how to resolve situations without resorting to force are essential. Otherwise the church and safety team members could be legally and civilly liable. Self defense measures ruled as illegal could mean criminal charges for assault, manslaughter or murder. They could also lead to lawsuits against the church and individuals for violation of civil rights, injuries, or wrongful death.

Wise measures of self defense mean choosing the proper level of force to use. The next section is on the Use of force Continuum.

Appendix: States by Self Defense Laws 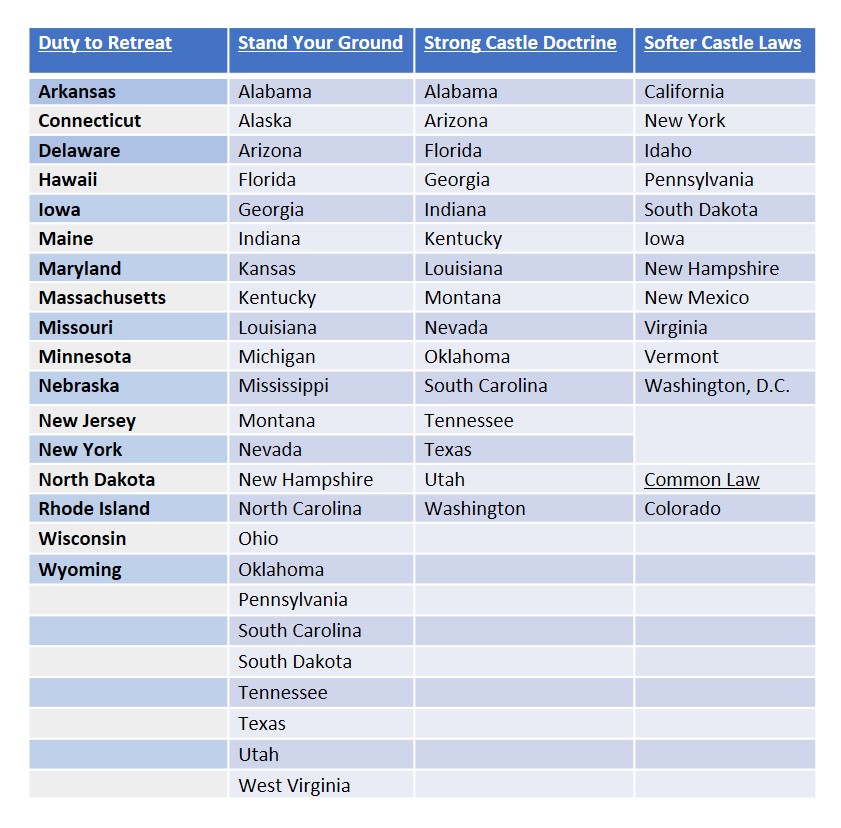