Dealing with Conflict - Going to the Root of Disruption 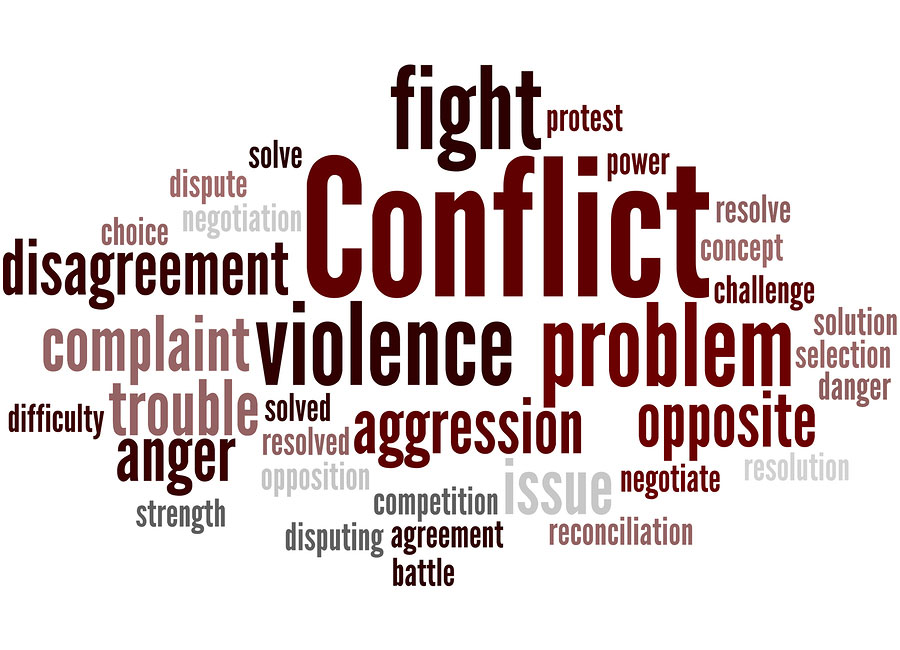 "Blessed are the peacemakers, for they shall be called sons of God." ~ Matthew 5:9

Be at peace among yourselves. ~ 1 Thessalonians 5:13b

If possible, so far as it depends on you, live peaceably with all. ~ Romans 12:18

Therefore an overseer must be … self-controlled … not quarrelsome … ~ 1 Timothy 3:2-3

“Jerry [not his real name] wants to be a marriage counselor. He says that after being married and divorced four times, he knows a lot about marriage.”

“Hah! With a track record like that, what does he really know? If he can’t keep peace in his own home, how can help others?”

Does this sound like something you’ve heard? Most of the relationships that fail – such as business partnerships, friendships, or marriages – do so because of failure in one or both of two areas: communication and conflict resolution. Two examples from the Bible of broken relationships are David’s break with his wife Michal (2 Sam. 6:16, 20-23) and Paul’s break with Barnabas (Acts 15:38-40).

In the first incident, neither party behaved well. Michal thought David was overly exuberant, so she responded with bitter sarcasm. David was angered, and didn’t handle his anger well and responded in kind. They didn’t divorce, but did live their lives separately after that in opposite ends of the palace.

Paul and Barnabas had an honest disagreement over whether to take Mark with them on the next missionary journey. Paul said he was not mature enough. Barnabas said to give him another chance. The argument was heated. They went their separate ways, Barnabas taking Mark, and Paul finding someone else. Eventually, they were reconciled. Apparently Paul and Barnabas had dealings with each other when Paul was in Corinth. Mark matured, and in later years was a help to Paul (2 Tim. 4:11).

Both of these stories are about conflict. Conflict in human relationships is natural. We do not see alike. We do not think alike or feel alike. We both want the same thing, but either we can’t both have it, or we are not willing to share. Jesus’ brother James tells us that quarrels and fights are caused by selfishness (James 4:1-3).

Sometimes the disruptive person is the object of a conflict initiated by someone else, the victim of another person’s selfishness. Frustration and feeling powerless can lead to acting out.

It is not hard to see the role of conflict in disruptive behavior. The church massacre in Texas began with conflict in a home, an individual prone to violence. A woman abused by her husband may become distraught, talk loud, pound her fists, stomp her feet, etc. A young person bullied in the neighborhood or at school may break a subdued demeanor with an outburst, even at church.

Not all disruption is caused by interpersonal conflict. There are other causes, too, such as loss of a job, medical issues, the death of a loved one, or mental illness, so not every developing disruptive situation calls for conflict resolution.

Offices, factories, and other business settings rely on teamwork to operate smoothly and efficiently. Many of them train their teams in conflict resolution : “Conflict resolution is conceptualized as the methods and processes involved in facilitating the peaceful ending of conflict and retribution.” [6] Team members learn both how to express their views calmly in a non-threatening manner, and how to listen to others. They learn how to learn from each other. Work team members also learn how to mediate, resolve conflicts between others.

Verbal de-escalation is like conflict resolution when some sort of conflict is behind disruptive behavior. Most of the time when we deal with disruptive and potentially disruptive persons, the conflict is not with us. It is with other persons, or with situations, or (for some persons) conflicts within themselves.

There are times when two or more persons in the building or on the grounds have a conflict among themselves. It can be anything from hurt feelings to legitimate concerns. In this case, the safety team member tries to de-escalate both sides. Our immediate goal is to protect people in the church by preventing disruption, avoiding violence .

The long-term goal is resolution of the conflict. The conflicting parties may work out their differences, or agree to disagree peaceably. Except in minor disputes, this is beyond our place, but restoring calm prevents tragic actions which would make reconciliation more difficult, if not impossible.

By lowering the level of agitation in individual(s), they become more reasonable. Our self control is a key ingredient. First, it sets an example for the antagonists. Second, it signals that we are being fair. Outside resources for verbal de-escalation and conflict resolution offer this piece of advice that is in the Sheepdog Church Security training course: Avoid showing partiality to disputing parties .

Conflict resolution as taught in businesses and organizations includes getting conflicting parties to resolve the conflict themselves. Also included is third-party mediation of conflict. As safety team members in the church, we may have to be mediators when the developing disruption involves two or more persons. We are not managers trying to resolve disputes between employees, but there are some similarities to calming two people at odds with each other. The American Management Association ( AMA ) lists The Five Steps to Conflict Resolution [7] :

- Step 1: Identify the source of the conflict.

- Step 2: Look beyond the incident.

The church safety team cannot resolve every conflict. We are limited to getting conflicting parties to back away from disruption in the church. Depending on the nature of the dispute, we may be able to suggest mediators and counselors. Usually, when using verbal de-escalation in the church, we can go as far as steps 1 & 2 in the AMA list, and may go as far as Step 4 or Step 5.

Calming One Party to a Conflict

Many times when a person is becoming disruptive because of a conflict, the other party is not there. Obviously we can’t mediate, but we can try to calm the person we are facing. The Sheepdog Church Security training course [3] has its own 5 Steps to Success :

It is when we (1) listen to the disruptive person(s) that we can use AMA ’s Step 1 and Step 2. Identifying the source of the conflict the person is in helps us to (2) empathize with them. Looking beyond the incident helps us see cause, not just effect, and helps us know what (3) questions to ask .

Summarizing (#4) is not like a lawyer summarizing a case in court. It is a process of verification, a “Do you mean…?” or “Are you saying...?” type of proposition. It opens the door to clarification and further discussion. It is a way of letting them know that what matters to them matters to us.

Steps 3 & 4 of AMA fit within SDCS ’s Step 5, “Talk about solutions.” At the least, it may give the disruptive person(s) hope that something can be worked out.

Many of us who have had teamwork training in the workplace have been taught conflict resolution, and we immediately relate it to verbal de-escalation. The goal is not just peacekeeping (calming things down), but peacemaking (working things out).