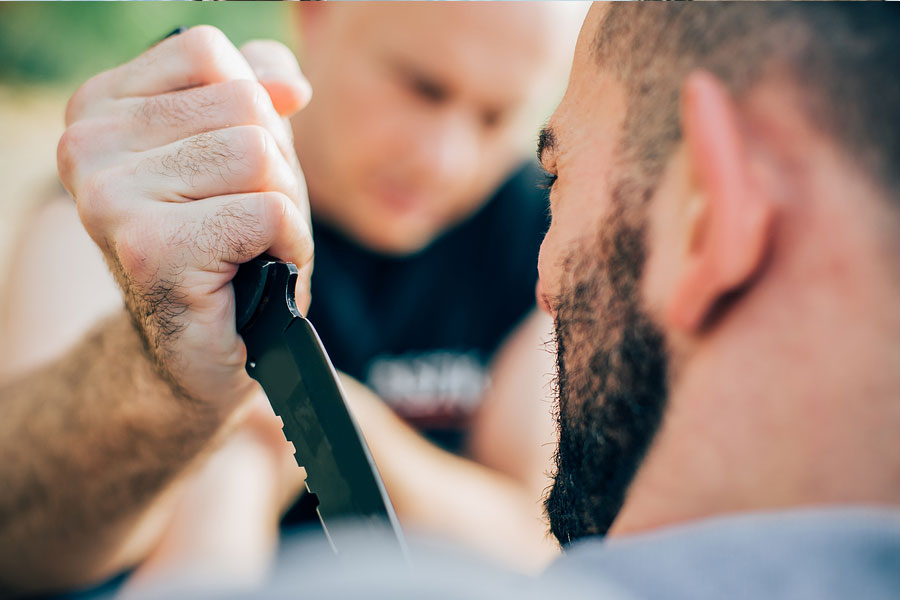 And when the angel stretched out his hand toward Jerusalem to destroy it, the Lord relented from the calamity and said to the angel who was working destruction among the people, “It is enough; now stay your hand.” ~ 2 Samuel 24:16 (1 Chronicles 21:15)

What Is a Continuum?

We are defining “continuum” just in case someone is confused by the term. First, the pronunciation – con-TIN-you-uhm (both u’s are pronounced).

What Is the Continuum of Force?

The Continuum of Force defines the levels of force used in defense (such as in providing security), restoring or enforcing order, and regaining or maintaining control. This begins with the mere known (usually visible) presence of a person with authority and ends with the use of deadly force. Theoretically, in national defense, the terminal point would be total war, including the use of weapons of mass destruction (such as nuclear). But in the context of a church safety ministry, the endpoint would include firearm use. As outlined by the National Institute of Justice[6], it is –

The mere presence of God in the Garden was enough to make Adam & Eve hide (Genesis 3:8). This was after they had disobeyed. Knowing that a police officer or a security guard is watching is a deterrent for many criminals. After all, they are not there to be caught or identified. Notice how traffic slows down to the speed limit when a clearly marked patrol car is sitting in the median or by the side of the road. That is the power of Presence.

An extension of this is conspicuous security cameras. Do you ever walk into a store and see yourself on a security TV monitor? The monitor is there to let people know that they are being watched.

Verbalization includes both verbal requests and commands, as well as verbal de-escalation. There can be levels of firmness within this level. Simple guidance – such as, “Please use this door” or “Watch your step” – and answering visitors’ questions can be an extension of presence, letting those watching know that you are there, alert and involved. But it also enhances security by reducing confusion and frustration.

Verbal commands have a range of forcefulness, such as, “Only staff and parents of children may go in there.” Or, “It’s time for you to leave.” Or, “Stop. Put that down.”

Verbalization goes beyond requests and commands. It also includes verbal de-escalation.[7][8] This is defusing a situation before it escalates into disruption and/or violence.

Empty-hand control ranges from just a touch to escort holds and take-downs. This could be a subject in itself. Safety team members who are members of the armed forces or law enforcement agencies are already trained in self-defense. Those who are not are encouraged to get self-defense training. This is not something to learn on your own. Personal instruction and practice is best. Contact Sheepdog Church Security[9] for guidance in finding self-defense instructors.

This is using non-lethal tools to control a situation. Some of these tools are pepper spray, tasers, stun guns, and batons. These are to be used with caution. Don’t use them unless necessary when lower level methods do not work. With these, you must know how they are covered by state laws and local ordinances. Some regulations require instruction and certification. Also, using them unnecessarily may lead to charges of assault and battery and result in lawsuits.

Non-lethal tools also include wrist ties and handcuffs. Using these turns a defensive situation into one of citizen’s arrest (the subject of the next article), which has its own legal implications with the potential of criminal charges and lawsuits for unlawful detention or abduction.

The most commonly known lethal weapons are firearms, but they also include edged weapons (knives, machetes, swords) and clubs or baseball bats. A lethal weapon is any object used as a weapon with the likelihood of causing death or grave bodily injury, so this would include a brick in the hand if it is wielded as a weapon.

There are situations, such as an active shooter incident[10][11], in which a lethal weapon, preferably a firearm, is the best option. Firearms require training and practice to be used safely and effectively. In using an aerial weapon (any that is propelled or propels a projectile), care must be taken that only the intended target is hit, not innocent bystanders.

The Continuum of Force and the Law

Laws on the use of force and citizen’s arrest vary from one jurisdiction to another. It pays to find out what they in your church’s location.

This is especially true regarding firearms. Some states do not allow them in certain places, including schools and places of worship, unless carried by sworn law enforcement officers who are on duty. Some states, such as Ohio, ban firearms in churches unless the congregation approves. Some states, like Texas, require every person on a “security” team to be licensed by the state as a security officer, whether armed or not. In places like this, it is safer to have a “safety” team and ministry than a “security” team.

Sheepdog Church Security’s recommendation for armed church safety team members is concealed carry (CCW). However, CCW has its own set of legal issues, depending on your location. Most states require some form of permit of registration for CCW. Again, check the regulations for your state and locality.

Choosing the Level of Force

Using the right level of force has legal implications. Law enforcement officers are expected to not use excessive force when confronting a suspect. This may be in the form of departmental review and discipline, criminal indictments (local, state, and federal), and lawsuits. Likewise, using excessive force can subject church safety team members to criminal charges or civil suits. If a disruptive person can be calmed down by using de-escalation, there is no need to execute an escort hold, shoot pepper spray, or pull a gun.

During an attack, use situational awareness to quickly size up what is happening and read the attacker. In the cited training course, are three questions:

Does the attacker have the INTENT to cause Great Bodily Harm or death?

Does the attacker have the ABILITY to cause Great Bodily Harm or death?

Does the attacker have the OPPORTUNITY to cause Great Bodily Harm or death?

Also take into account your own position, abilities, training, and equipment.

Following this, determine the level of force necessary to stop the attacker. If “yes” is the answer to all three questions, lethal force may be used.

Is less-than-lethal force likely to fail?

Is the threat immediate?

Would bystanders or hostages be harmed?

There are more details in the Training Bundle.

Developing the ability to choose the right level on the Continuum of Force to use in any security situation in the church is critical to effectively defending the church without incurring legal liability and costly insurance claims.