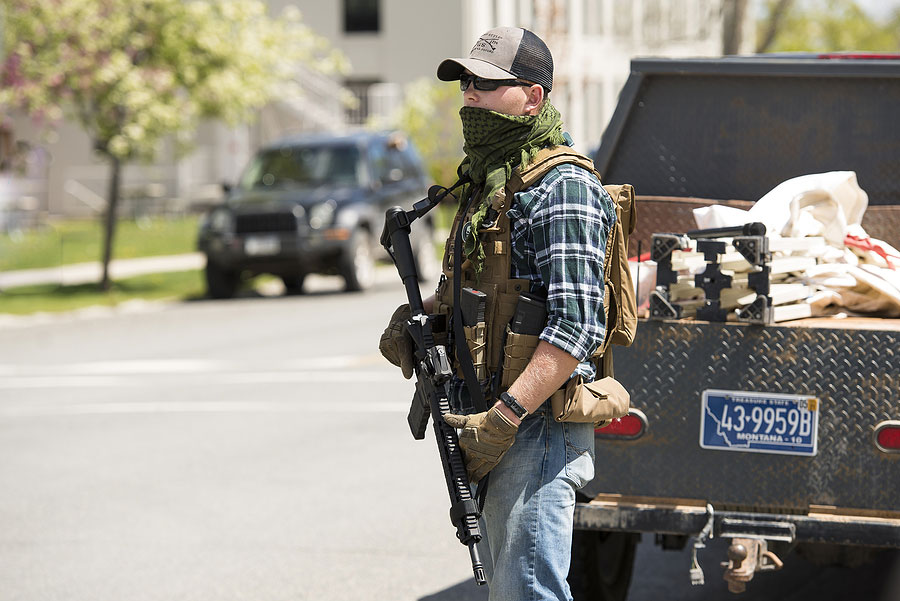 An article covering a current issue

And Pharisees came up and in order to test him asked, “Is it lawful for a man to divorce his wife?” (Mark 10:2).

We must not put Christ to the test, as some of them did and were destroyed by serpents (1 Corinthians 10:9).

But Peter said to her, “How is it that you have agreed together to test the Spirit of the Lord?” (Acts 5:9).

We will be tested. Just as in Bible times, many tests are honest, done for good reasons. But there are also dishonest tests, meant to trip up or slander the targeted person(s). Sometimes the motive is financial gain. That appears to be the case with many of the self-described “Civil Rights” auditors who test whether government offices, police, businesses, and organizations (including churches) respect the auditors’ 1st Amendment and/or 2nd Amendment rights. Some auditors target churches with the intend of harassment.[1]

Los Angeles, California, February 14, 2019 – A First Amendment Auditor on the public sidewalk was recording video footage of a synagogue and a girls’ Hebrew School in Los Angeles while the school was in session. She was dressed in black and wearing a backpack. Fearing it might be anti-Semitic radicals casing the place for an attack, school administrators called the synagogue’s security guards.

The auditor refused to cooperate with the guard who came out to the fence. He pulled out his handgun and fired what he called a “warning shot” down at the pavement. The ricocheting bullet (or shrapnel) hit the auditor in the leg. All the while, she was recording. Her audio was laced with profanity and crude jibes. The guard was arrested for assault, but released when the prosecutor refused to charge him.[3][4]

Lebanon, Pennsylvania, January 23, 2019 – A “First Amendment Auditor” was convicted of summary disorderly conduct for his actions while “auditing” the county courthouse.[5]

Oklahoma City, November 6, 2019 – A white Second Amendment auditor with a long rifle showed up on the sidewalk in front of an African American church. Of course, they called the cops. The responding officer tells the men of the church to not show any weapons, move back to the front of the building, and stay calm so no one is hurt. On the officer’s body cam video, the “auditor” is heard saying that he’s “on the public easement” (all the while recording with his cell phone camera). No action is taken and everyone remains calm. Comments on the video shown on a TV station’s webpage indicate the “auditor” was a well-known attention seeker in the city.[6]

Later that month, the same auditor was arrested for carrying a firearm into a place where alcohol was served. Just over a year later, the charge was dismissed.[7]

Warwick, Rhode Island, July 19, 2019 – A First Amendment auditor who was already somewhat notorious in Rhode Island was filming people paying their taxes in a tax office. Employees called the police. He was removed, but not arrested, after a woman became upset and tried to knock down his phone. Twice later, he returned to the office and argued with officers, When he was ready to finally leave, he thanked everyone for helping him make money.[8]

The free downloadable resource for August is Equipped for Success: Recommended Essential Equipment.[9] Click *HERE* to get it. Several of these items are available at Sheepdog's Amazon Page.

If a civil rights auditor shows up at (or even in) your church, would you know what to do or not do? Obviously, as is seen in the news stories, we’d need to have been prepared with information and training. The Complete Church Security Training Program[10] has the classroom training materials for all seven Sheepdog Church Security training courses:

What Are Civil Rights Auditors?

According to Wikipedia, “First Amendment audits are a largely American social movement that usually involves photographing or filming a public space.”[11] Second Amendment auditors are like this, but openly carry firearms (especially AR-15s) while recording their videos. Together the persons conducting these audits are called “Civil Rights auditors.” The reason this is “largely American” is how significant constitutional rights are in the United States and the current attacks on these rights. This is coupled with concern about the government itself violating these rights (allegedly in some cases, actually in others). The auditors claim that they are keeping the police honest.

The public spaces where they do their auditing are places where filming and carrying weapons will arouse suspicion and concern, such as government offices, schools, businesses, and churches. The usual response of persons in these places is to send a guard and/or call the police. The guards and the police are the real targets of audits. It is their responses that matter: Will they respect the Constitutional rights to photograph and report, or to carry a weapon?

The 2A auditors provoke reaction just by where they carry a rifle or machete. The 1A auditors usually provoke the responders further by how and what they say, claiming freedom of speech as well as freedom of the press (they claim to be publishers, since they post their videos online). They argue with whoever responds, especially if it a guard or a police officer. If that doesn’t get a violation of their rights – such as being told to get out, issued a ticket, or arrested – they will escalate their outrageous speech and/or actions. All of this will be recorded. 2A auditors must be more careful in how they provoke a response, lest someone acts in defense with deadly force.

Sometimes auditors work in pairs, with one acting as a witness standing back and recording the whole scene. This produces two videos which can be used to make the YouTube version.

Several critics hold that while civil rights auditors claim to be holding police and security guards honest, their own motives are not entirely honest, that they are concerned more about fame and fortune than fairness. Many of them have garnered large followings on the Internet with sizeable earnings from advertising. They thrive on outrage, and very few commend the “good” cops who respect civil rights, preferring to show those who “fail the test.”

In two Sheepdog Church Security training courses, we learn how to respond to protestors.[12] However, these auditors are different.

Some protestors just carry signs and express themselves verbally (talking to those coming in or leaving, shouting, chanting, singing). Of course they want the media there to see what they are concerned about. In Lynchburg, Virginia, a prominent church was picketed by persons who objected to the church’s stand on a certain social issue. These protesters did not disrupt the service, but they announced their actions and received news coverage.

Several years before, on the other side of the country, protesters with the same social concerns actually physically accosted people going into a church, they did whatever they could to disrupt the service and damaged the building.

Auditors do not usually claim to have a cause to protest their targets other than those (usually law enforcement) whom they consider as already disrespecting and violating certain civil rights, namely

However, it is evident from their videos that the intent of some is harassment of certain organizations, such as churches for their stands on social issues.[1]

Auditors draw attention to themselves by walking along the sidewalk or street taking photos, recording videos, or carrying a very conspicuous firearm (or other deadly weapon). In some cases, the publicly-available walkway is technically on church property, but with a public easement. With government offices, they go in and roam around areas open to the public. They deliberately go to the edge of legality to see what the response will be.

Our problem is how do we deal with someone whose actions arouse suspicion, but technically are constitutionally protected? Really, there are two locations they can be, just outside the perimeter and inside the facility. Your response is adjusted to where the auditor is.

In several states, the associations of municipalities, counties, and other local jurisdictions have published guidance for their members on dealing with constitutional rights auditors. These consist of a discussion of what the auditors are doing and how they act followed by points of action. Although these are not for churches, we can learn from them. For example, from the Municipal Association of South Carolina:

“They are well within their rights to do so, and from my experience, the best response to an audit roaming around your police station public areas is to ignore them. They eventually lose interest and move on to somewhere they can make headlines.”[15]

Guidance for Churches in Responding to Civil Rights Auditors

The guidelines are similar for churches. Here is a brief outline:

What if There Is a Problem?

What if your church was audited and a Safety Team member did something the auditor claimed was a violation of his or her constitutional rights?

Unless force was used, the risk of prosecution is low, but the chance of a lawsuit is very real (remember, most auditors are in it for the money). In the case of a criminal charge, a lawsuit, or both, that member will need a lawyer. If that team member was a member of U.S. LawShield, one call will get him/her a lawyer. You can join U.S. LawShield through Sheepdog Church Security’s affiliation.[17]

If and when your church is audited, responding with kindness and respect would be a good testimony. “Do not repay evil for evil or reviling for reviling, but on the contrary, bless, for to this you were called, that you may obtain a blessing” (1 Peter 3:8).