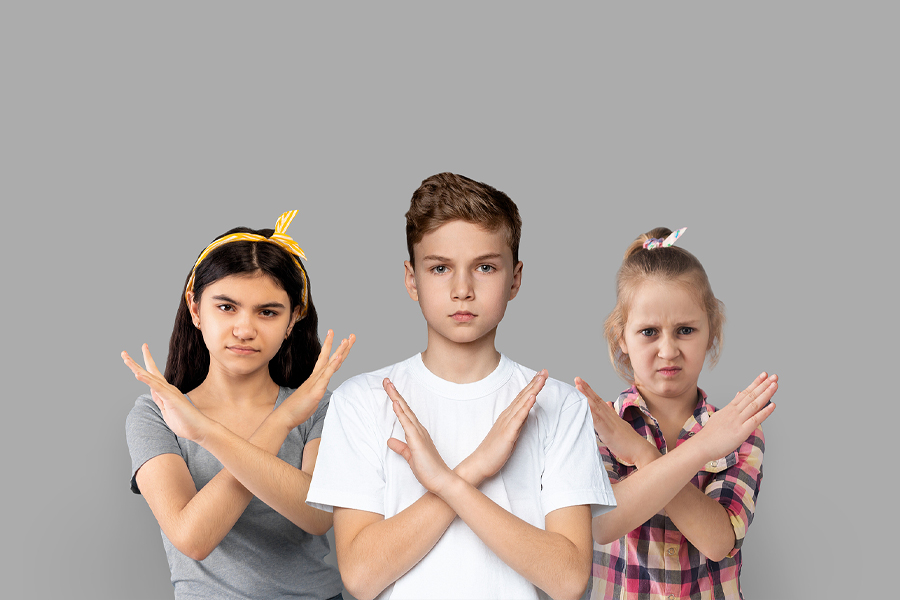 An article based on the Safety Member Certification training module "Protecting Children from Abuse v4"[1] and the "How to Prevent" chapter in the "Safety and Education" section of the Dru Sjodin National Sex Offenders Public Website.[2]

*Tamar was most likely a teen when her half-brother raped her:
And when [Tamar] had brought [food] unto him to eat, [Amnon] took hold of her, and said unto her, “Come lie with me, my sister.”
And she answered him, “Nay, my brother, do not force me; for no such thing ought to be done in Israel: do not thou this folly. And I, whither shall I cause my shame to go? and as for thee, thou shalt be as one of the fools in Israel. Now therefore, I pray thee, speak unto the king; for he will not withhold me from thee.”
Howbeit he would not hearken unto her voice: but, being stronger than she, forced her, and lay with her (2 Sam 13:11-14).

* The Law addresses situations where a damsel (teenaged girl) has been compromised:
But if a man find a betrothed [promised to marriage] damsel in the field, and the man force her, and lie with her: then the man only that lay with her shall die. But unto the damsel thou shalt do nothing; there is in the damsel no sin worthy of death: for as when a man riseth against his neighbour, and slayeth him, even so is this matter: For he found her in the field, and the betrothed damsel cried, and there was none to save her.
If a man find a damsel that is a virgin, which is not betrothed, and lay hold on her, and lie with her, and they be found; Then the man that lay with her shall give unto the damsel's father fifty shekels of silver, and she shall be his wife; because he hath humbled her, he may not put her away all his days (Deuteronomy 22:25-29).

* The Mosaic Law forbids incest (the wording in this verse includes both daughters and step-daughters, and both granddaughters and step-granddaughters; other forms of incest are forbidden in other verses):
Thou shalt not uncover the nakedness of a woman and her daughter, neither shalt thou take her son's daughter, or her daughter's daughter, to uncover her nakedness; for they are her near kinswomen: it is wickedness (Leviticus 18:17).

Because their bodies, hormones, and emotional needs are changing, teens are especially vulnerable to manipulation by sexual predators. This is why they need us to educate them, counsel them, comfort them, listen to their concerns, and take measures to protect them.

Sadly, almost all new stories of teens and sex are about abuse:

New York City, November 30, 1997 - Members of a church saw the youth pastor as a "father figure" to the church's teens - that is until police officers showed up on a Sunday morning and arrested him. He was charged with sexually abusing a 14-year-old boy for four months.[3]

Rancho Cucamonga, California, July 22, 2021 - The founding pastor of a church was arrested for sexual abuse of a minor under age 14. An investigation began in April after a girl (age 14) reported to the sheriff's office that he had sexually abused her from age 9 to age 12.[5]

Bridgeport, West Virginia, April 12, 2022 - A girl reported to police that a Morgantown man had abused her sexually for four years, from age 14 until she was 18. He was arrested and charged with sexual abuse of a minor.[6]

Loudoun County, Virginia, October 12, 2021 - Parents of students, including the father of a girl who'd been raped, confronted the school board demanding to know why the student who raped the girl had been transferred to another school. At the second school, he allegedly trapped and groped another girl. The parents demanded changes in the policies that allowed these incidents to happen.[7]

Forrest City, Arkansas, April 4, 2022 - Police filed charges of child sexual abuse against the now-former youth pastor of a church. At least four girls filed police reports against him. One, age 17, said he repeatedly hugged her closely when she was 14, then persuaded her to have sex with him (in the church) when she was 15.[8]

This article is discussed in a videocast on the YouTube channel Sheepdog Church Security Academy (the audio is in a Church Security Roll Call podcast on Sound Cloud). In it, Kris draws on his military, law enforcement, and church security experience as he covers the subject. Subscribe to the channel to not miss any videocasts.

Below the video screen is a link to the Weekly Show Notes. These article summaries are PDFs which can be printed and shared for teaching and for discussions of the topics. The link for this article is active until the next article is posted a week later.

The Risk to Youth of Sexual Abuse

Teens are especially attractive to sexual predators. They are becoming sexually mature, but still have the freshness of youth. Their innocence attracts those seeking to be the first experience for someone, and naïveté makes many youths easy prey.

There is a reason why states have set ages of legal consent. Experience has shown that, as a general rule, young people do not adequately consider the long-range consequences of their decisions when below a certain age - though there are both younger and older exceptions. This principle has precedence in the biblical concept of the age of accountability.

In most states, the age of legal consent for most transactions is 18, and is 21 for alcohol consumption. The age of consent for sexual relations is also 18 in most states, somewhat younger in a few. The reason is obvious. Adults and older youth can take unfair advantage of the naïveté of youth to rob them of their innocence. The 17-year-old in Arkansas said she cries when she remembers her experience.[8]

Many abused youth have troubled marital relationships later in life. A lifetime of trouble from sexual abuse is not anything new. In 2 Samuel 13-18, Tamar probably never married nor had children. Her half-brother was murdered by her full brother, who years later died in a revolt against their father.

Although some news headlines tell about rape and assault by strangers and barely-known acquaintances, most sexual assaults are by persons already well-known to the victims. For children and youth, these are mostly family members, friends, and authority persons. Family members may include parents, aunts and uncles, grandparents, older siblings, and cousins. Family friends are usually adults and older youth. Authority persons usually include teachers, pastors, group leaders, and coaches. Not all offenders are men; some are women.

The quoted laws in Leviticus and Deuteronomy prohibit sexual exploitation within the family. Also, if a man seduces an un-betrothed virgin, he marries her and cannot divorce her (can't just throw her away).

How Can We Protect Teens?

We can protect our adolescents by example, education and counselling, screening, and heeding.

First of all, for good or for bad, we lead by example. Our youth need to see us setting and living within boundaries. We do not act inappropriately with those who are not our spouses. We show affection to our children, but with certain lines not crossed. Our speech is modest, we do not use pornography, and we are careful about what we read, watch, and listen to.

By Education and Counselling

As young persons are going through puberty, they need to know what's happening to their bodies, why they feel the way they do, and how to handle their impulses. This includes how to relate to members of the opposite sex in social settings and one-on-one. They need to learn how to set boundaries for themselves. Teens also should know what to do when someone attempts to cross those lines.

More particularly for this article, a teen needs to recognize grooming in order to avoid it and resist it. Sexual predators know how to stir up an adolescent's passions and how to condition their targets to participate in sexual activity. For example, the youth pastor in Forrest City began with close hugging. If teens are wary of grooming, then they can move away from it. Grooming can be done not only by adults, but also by sexually active teens.

The "How to Prevent" chapter on the Dru Sjodin National Sex Offenders Public Website has a "How to Talk to Your Teen" segment. An outline of the advice is:

Following this is a list (with links) of other resources:

A page on HealthyChildren.org is "Helping Teens Resist Sexual Pressure" (last updated in 2009). It lists five reasons a teen is more likely to engage in sex. Then it advises abstinence as "A Positive Approach" and gives examples of what to say. Following is how to advise teens in resisting sexual pressure. This includes example of questions to ask and questions to answer. It also gives examples of what a teen can say to ward off (refuse) sexual advances.[9]

When possible, try to keep sexual predators away from our teens. This means screening and re-screening those who have contact with them in our church, including off-site activities. Those in leadership include pastors, teachers, counselors, activity leaders, and youth leaders. Some organizations, such as Protect My Ministry, help churches to screen pastors, staff, and volunteers more effectively.[10] The church can also search the National Sex Offenders Public Website for sex offenders in the community, or search for an applicant or someone who is already a volunteer, staff member, or pastor.[11]

One reason for talking with your teens about sexuality (in an age-appropriate manner) is to give them enough confidence to talk with you when they have questions or concerns. Let them know that it's OK to tell you if a person - even someone in the family or a family friend - makes them feel uncomfortable. It might not be an overt move, but grooming, such as expensive or unusual gifts or borderline touching.

If you believe there is inappropriate behavior between someone and your teen (the offender could be another teen), you can address that issue with the involved person(s). If the teen is your student (or a student where you work), someone you counsel, a member of a group you lead, or is in a church where you are a pastor, on staff, or a volunteer, this should be reported to the proper persons who can follow up (the follow-up should include a new sex offender search, including former and present residences and locations of employment). If the behavior constitutes sexual abuse* (or you have good reason to believe it does), then it must be reported to the authorities.

We should recognize that our teens are at risk of sexual abuse, then do what we can to reduce that risk. This includes teaching the teens to recognize attempts at grooming, and encouraging them to confide in parents and/or teachers.

Each Church Safety Team is encouraged to have all its members trained and certified through the Safety Member Certification program (including "Protecting Children from Abuse v4"). Each person who takes all the training modules and passes all the certification tests will be a Certified Safety Member for two years.[1]

Three formats of training are available: