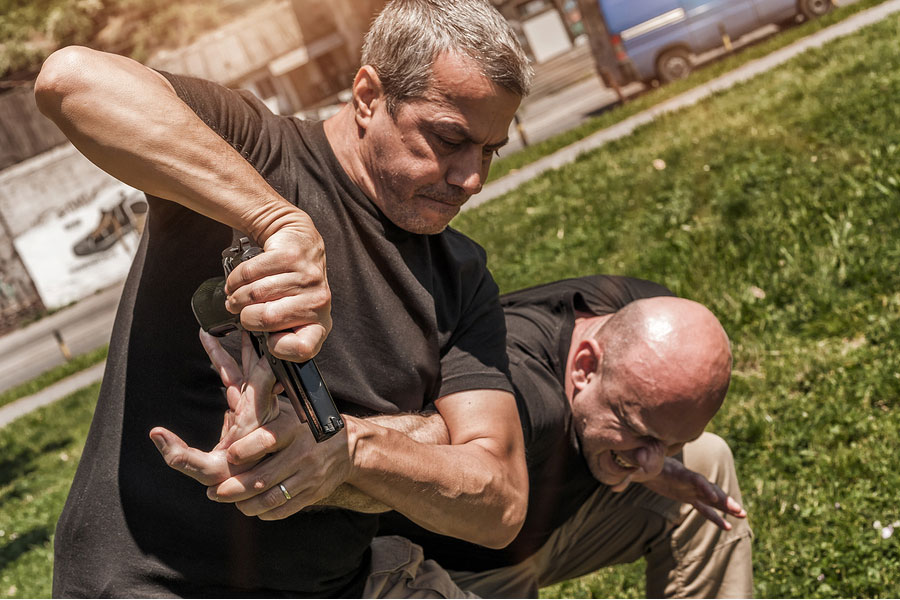 Based on the "Basic Use of Force Laws" training module in the Safety Member Certification program.[1]

Other than wrestling, the Bible has very few references to unarmed self-defense and control moves.

And Jacob was left alone; and there wrestled a man with him until the breaking of the day (Genesis 32:24).

For we wrestle not against flesh and blood, but against principalities, against powers, against the rulers of the darkness of this world, against spiritual wickedness in high places (Ephesians 6:12).

Then the chief captain came near, and took [Paul], and commanded him to be bound with two chains; and demanded who he was, and what he had done (Acts21:33).

In most disruptive incidents, there is no need or justification for using lethal force. The middle level of the Use-of-Force Continuum is Empty-Handed Control. Learning unarmed moves for self-defense and control gives us the option of stopping disruption without a weapon. Also, when facing deadly force in close quarters, an unarmed move is usually quicker than pulling out a gun, knife, or spray.

Not all of these unarmed responses were in church. Defenses against deadly force are more likely to get in the news than lower level encounters, but non-lethal physical violence has been stopped with empty-handed defense-and-control moves. What these news stories do have in common, with one tragic exception, is weapons were not used in the defense.

Daingerfield, Texas, June 22, 1980 - A former school teacher dressed in combat gear, carrying two pistols and a rifle, burst into the sanctuary of the First Baptist Church and shouted, "This is war!" He began firing at people. One usher tackled the shooter, knocking the rifle loose. Two others rushed him, carrying him out through the door, while the shooter fired the .38 with the point of the barrel in one usher's belly, killing him. Released, the attacker fled across the street.[2]

Antioch, Tennessee, September 24, 2017 - When a masked man firing a handgun came into the church - after killing a member in the parking lot - an usher rushed him, grabbing the hand with the weapon. The shooter went down when wounded by his own gun. When the usher went out to his vehicle to bring in his own weapon, he had already stopped the attacker.[3]

Boston, Massachusetts, October 11, 2022 - A 91-year-old woman was attacked by a knife-wielding assailant while walking her dog in a park. Having been trained in self-defense, she fought the attacker and he ran away.[4]

Perinton, New York, July 21, 2022 - A candidate was attacked on the stage at a campaign event by a man wielding a knife. The candidate, who held a martial arts Black Belt, stopped the attack, holding the assailant's wrist and arm.[5]

* In this case, tackling the shooter would have been quicker and safer than taking time to pull out a gun:

White Settlement, Texas, December 29, 2019 - A man wearing a wig, a fake mustache & beard, and a long coat stood up during communion in a church service. He approached and spoke to a communion server, and pulled a short shotgun out from his coat. A security team member sitting nearby stood up and reached for his handgun. The man with the shotgun turned and fatally shot him, then shot the server, before being downed by another security team member.[6]

Kris discusses the topic of this article in a Sheepdog Church Security Academy videocast on YouTube (The audio is on a podcast). You can subscribe to the videocast.[7][8]

Below the video, in the comments section is a link to the Weekly Show Notes (article summary). The downloadable Show Notes for this article are available until the next article and videocast are posted a week later. This PDF can be printed and/or attached to a message for sharing with others.

There are several competitive sports derived from unarmed combat. The oldest are boxing and wrestling. Competitions in Judo and Karate were popularized in this country after World War II. Now several martial arts have become popular sports. Alongside these competitions, the teaching of martial arts as self-defense skills has grown. A major advantage is that this provides a weaponless self-defense option. One martial art, Krav Maga (an Israeli military skill), is better-known as defense-and-control than as a sport.

More churches now are allowing members of their safety teams to be armed. While this means being better able to stop a deadly assault, we must admit that most disruptive incidents do not require that level of force. Deadly weapons are an "only if" option, and care is still needed when using less-than-lethal weapons. We need other means when engaging non-lethal threats. We also need to be able to respond when we don't have a weapon at the moment, such as the usher in Antioch.[3]

The safer option does not mean jumping in with wrestling holds, Judo throws, and Karate chops unless the subject is already acting violently, endangering others. Begin with presence (Force Level 1), then voice (Level 2). Try verbal de-escalation (Level 2) before getting physical (Level 3). Sometimes, hopefully rarely, an uncooperative person may need to be escorted out with a firm grip. Legally, it is safer to call the police if a person refuses to leave as long as they don't endanger others. People physically escorted out may sue for wrongful arrest or excessive force - even if you win, there are legal costs to pay.

When Push Comes to Shove

When facing deadly force, many people have acted instinctively with no training in how to use body force. It becomes a combination of wrestling, boxing, and football tackles, whatever comes to mind. However, training in self-defense can help us to be more effective in our response. If the violence is on the level of a minor scuffle, we need to know how to control the person(s) with the least necessary injury - in other words, we want to avoid excessive force.

There are a few holds and moves that are most useful, such as armbars, wristlocks, escort holds, and takedowns. We're not trying to teach them in this article. They are learned better through in-person self-defense training. Here, we'll just give brief descriptions of four common moves.

In an armbar, an arm is forced behind the subject's back, rotating the elbow, sometimes also the shoulder. This is primarily a control move, but can result in serious injury if misused.

A wristlock is a hold grasping and rotating the subject's hand. It can be both a defensive move and a control (submission) move. As with the armbar, there is a risk of injury to the subject.

Also known as the escort position, the escort hold is used on subjects who are not strongly resisting. It usually involves holding a wrist with one hand and the elbow with the other. Since the subject can still walk, it is used to "escort" a non-compliant person off the premises.

A takedown is getting the subject off balance and forcing him to the floor or ground. Position of the feet is the key to a successful takedown, because then you can apply thrust across his stance. Tackling is a common takedown means, using body momentum.

The Safety Member Certification training module "Basic Use of Force Laws" covers unarmed self-defense in Section 6 (Unarmed and Defense Weapons). It does have descriptions and illustrations of some self-defense and control moves, as will be seen in this clip from the training video.[9]

However, no matter how much you may learn by reading, listening to instructors, and watching videos, self-defense skills are best learned through in-person training and practice.

All members of a Church Safety Team need to be trained and certified. This is done through the Safety Member Certification program.[1] Training is in three formats: Team Certification (church-hosted classes), Individual Certification (self-paced online instruction), and Online Events (live Zoom classes)

Team Certification (church-hosted classes) is ideal for training a newly-formed Safety Team. All members can be trained at the same time. A few of the advantages of in-person classes are questions & answers, discussion, and enacting scenarios. Team Certification is also advantageous for recertification every two years.

Individual Certification (self-paced online instruction) is ideal for training a new member of an already-trained team. Also, a member who is unable to attend one of the Team Certification classes can take that module online.

Online Events (live Zoom classes) are held on Sunday afternoons at 3:00 pm Central Time. They are open to both individuals and groups. This combines the advantage of taking classes from home or the office with the advantage of group participation.

Weapons, whether lethal or non-lethal, are not always the right option. We need to be able to use unarmed self-defense and control moves for wrestling with disruptors.

The next weekly article is "2005 Sash, Texas, Assembly of God Shooting" (Lesson Learned).