An in-depth look at a Church Shooting Incident 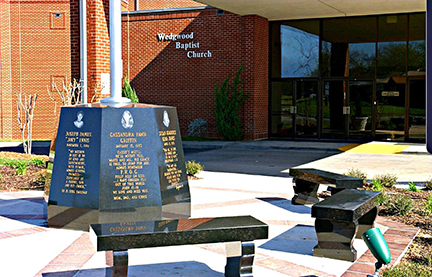 We are beginning a monthly feature looking at church shooting incidents. We will consider what happened and why, as well as whether it could have been prevented and how a church can prepare for such an incident. Key resources for this are the Sheepdog Church Security Training Course, "Active Shooter Response v4," and the Church Security Guide article "Church Safety Teams and Active Shooter Training."

Christian high school students in Fort Worth, Texas, planned to join other students across the nation on Thursday, September 16, 1999, in See You at the Pole, by meeting before classes at the flagpoles of their schools to pray. Wednesday evening, the youth of Wedgwood Baptist Church gathered in the sanctuary in a rally to celebrate and worship before their participation the next morning. A Christian band was playing, refreshments were ready, and the band had CDs for sale at a table in the foyer. Youth from other churches also came. This promised to be quite a night. It was, but not in the way expected.

The program began at 6 pm. Almost an hour later, a middle-aged man dressed in a tee shirt, jeans, and a black windbreaker entered the church with an angry face and a cigarette in his mouth. An associate pastor in the foyer asked him to put out the cigarette. The man pulled out a handgun and shot him then shot two others in the foyer: the children's choir director sitting on a couch and a person tending the CD table. According to one report he fired a few shots into the choir practice room without hitting anybody.

His next target area was the sanctuary. As music and singing drifted out into the foyer, the shooter barged into the sanctuary and banged on the door to get attention. He shouted, "I can't believe you believe all this junk! This [pointing to his handgun] is for real!" Then he began shooting, using first one of his two handguns, then the other. He tossed a pipe bomb into the aisle, which exploded vertically with no injuries. Repeatedly reloading the weapons, he calmly and methodically continued shooting.

There are both confirmed and unconfirmed accounts of what was said to the killer. We do know that someone told him, "You don't need to be doing this," then told him about Jesus. The shooter's response was a stream of profanities, curses, and obscenities. Close to ten minutes after the rampage began, the killer sat on a back pew and shot himself. He had shot 14 persons, both adults and teens. Six victims plus the shooter died there, and one died at the hospital. The associate pastor, who was shot point blank in the torso, survived.

Obviously, the killer could not be questioned, and he did not leave a note about what he intended to do and why. He had no links to Wedgwood Baptist Church or any of its members, so this was not a personal vendetta targeting any one person. Even though motives for the attack were not laid out directly, clues emerged during the following weeks.

According to people who knew the killer when he grew up, he resented being made to attend church three times a week. His opening statement in the Wedgwood sanctuary revealed his anti-Christian attitude. This was further borne out by anti-religious material and journal entries left in his house. Apparently his resentment grew over the years since his youth.

Acquaintances said the shooter was "not the same" after coming home from the Navy. It appears that drug use was a factor. According to the Dallas Observer, "He had been discharged from the Navy in 1983 for marijuana use." We do not know when he started using drugs, just that their use led to his discharge from the Navy. Medical research has shown that extended intense use of marijuana can lead to paranoia and other mental disorders.

Nicely put, the shooter's house was a mess. Damage done to it was evidence his mental state. There were filth and signs of deranged outbursts, including family photos ripped up, holes punched in the walls, and cement in the toilet.

According to neighbors, his behavior was bizarre; they called him "weird" and "crazy." He seemed to get worse after his mother died a decade earlier, and he was several times seen verbally and physically abusing his father. His father (who died a few months before the church attack) had been supporting him, so that had ended. He had been prescribed Prozac at one time, but no drugs showed in his autopsy.

Then there were his complaints, such as those to the local newspaper. He claimed that he was being charged with serial killings and was being subjected to psychological warfare. He was unable to hold a job and complained that co-workers were oppressing him.

All of this points to mental illness. Combined with his anti-religious attitudes, some people could suspect demon possession, while others might suspect schizophrenia. Whatever the actual mental condition, the subject did not get the attention he really needed: mental health treatment and protective confinement as a danger to himself and others. At the least, the abuse of his father should have received official attention, but no one was willing to report it, likely out of fear.

Evidence points to the killer identifying and following extremist hate groups. He claimed membership in the Phineas Priests, an anti-Semitic group. He also was interviewed in connection with a Klan organization. This brings up one possible reason a Southern Baptist church was targeted. The Texas Baptist Association had issued a call to convert Jews, and this brought his hatred of Christians and hatred of Jews together, enough to trigger action by a mentally unstable person.

There were both short-term and long-term responses.

During the attack, the first reaction of many in attendance was that this was a skit. Sensing this may be one reason the attacker shouted, "This is real!" The band quit playing and its members ducked and hid. Many attenders dived for cover or ran. The only confrontation of the killer was verbal, and that was rejected with profanity and obscenities.

Neighbors of the church called 911 when they realized the noise was gunfire, and police came. By the time they arrived, the shooting had stopped and the gunman was dead. Since a pipe bomb had been discharged, the police evacuated the church and checked it for explosives, leaving the dead where they lay until the site was declared all clear.

After all the evidence had been collected and the scene released, church members and other volunteers worked at cleaning and repairing the facility. There was a memorial service for the victims, but counseling and therapy for the survivors was unavailable. For example, at least one student went to school the next day. Even then, members' faith deepened and the congregation pulled together, comforting and counseling each other.

The way the attacker was able to simply come in and begin shooting revealed that the church was totally unprepared for any kind of violence. This was almost five months after the Columbine High School shooting, but almost no one expected a mass killing in a church.

Wedgwood Baptist Church saw the need for an immediate response to protect people in the church during an attack. Led by a veteran of the police department, they formed the Sheepdog Church Group. Texas law at that time did not allow security teams in churches, let alone armed ones, but there are ways to respond to an armed attack when unarmed. The important goal is saving lives. The lead of Wedgwood Baptist Church was followed by other churches.

How could a church be ready to respond to an active killer (a person armed with firearms and/or explosives or other weapons capable of mass murder, intent on killing as many as possible)? The primary lesson learned from the 1999 Wedgwood Baptist Church shooting is Watchfulness.

When the assailant came in the door, no one had a clue that he was a danger to all concerned. He had an angry face and was smoking a cigarette, and it was the cigarette that got someone's attention.

Today a safety team is trained to spot signs of potential danger. The intruder's demeanor gets the attention of a greeter or a Safety Team member and he is watched. If a weapon is detected or suspected, the team is alerted.

Watchfulness also includes threat assessment. Are there any persons associated with the church or its members who are probable threats? Is there anyone who has threatened the church or churches in general? In the case of Wedgwood Baptist Church, the assailant was off the radar. He was unreported to the authorities, and none of the church members was among his acquaintances. Therefore, real-time, at-the-scene observations might have made a difference in the outcome.

Watchfulness works best as part of situational awareness. This is being aware of your surroundings, both static (the entire scene at one moment) and dynamic (changes in the surroundings).

Awareness Level – Alertness ranges from Level White (total unawareness) to Level Red (ready for fight or flight) and Level Black (in a fight). Key awareness personnel need to be at least Level Yellow, which is general awareness, alert for any indication of a threat.

Full-Spectrum Awareness – By "full-spectrum" we mean all the way around, in all directions. Our awareness is 360º horizontally and 180º vertically (360º if we are on an upper level).

What to Watch for

When people are present in our area, we are aware of who they are. We are also aware of how they look and move, what they say, etc. When the intentive killer came through the door at Wedgwood Baptist, persons in the foyer noticed his demeanor – angry – and the cigarette. The associate pastor focused on the cigarette.

Apparently no one noticed signs of a weapon and spare ammunition. That is something they later learned to watch for. Indications that a person may be carrying a firearm or other weapon are:

If a greeter, foyer monitor, youth leader, or the assistant pastor had connected the angry face with tell-tale indicators of weapons, they could have signaled someone to call 911 while keeping the intruder occupied and calm. That person would have also been ready to react defensively. As it was, the associate pastor did not know there was a gun until after he'd been shot.

Don't limit watchfulness to the foyer and the sanctuary. Monitor activity outside, in the hallways, in the classrooms, etc. Have enough Safety Team members on duty to have one patrolling the premises. If the church has security cameras in place, monitor them.

Effective watchfulness can at least buy time for the intended victims of an active killer to help themselves. This works when the members have learned the Run, Hide, Fight response.[13]

When an unexpected tragedy happens, such as at Wedgwood Baptist Church in 1999, we can learn from it and prepare to respond to future threats to keep them from becoming tragedies. This is more fully covered in the Sheepdog Church Security training course "Active Shooter Response v4." [1]