Protecting the Flock from Violent Threats 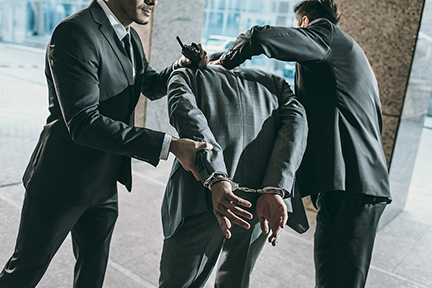 What do we mean when we say, “force”? As a verb, it means to apply pressure, as in, “He forced the plug into the hole,” or, “The delegates forced a floor vote.” As a noun, it means pressure, applied exertion, influence, power, etc. For a Church Security Team, force is whatever pressure or influence you use to defend the church and its members – more specifically in the context of this series, against violence or the possibility of violence.

And the Lord brought us out of Egypt with a mighty hand (Deuteronomy 6:21).

My God, my rock, in whom I take refuge, my shield, and the horn of my salvation, my stronghold and my refuge, my savior; you save me from violence (2 Samuel 22:3).

"A gentle answer turns away wrath, but a harsh word stirs up anger" (Proverbs 15:1).

Tyler, Texas, September 13, 2015 - It was a Sunday afternoon. Many people were still in the church after a reception for the musicians following the morning service. A deacon met a man dressed in camouflage in the parking lot who asked to see the pastor. The deacon led him into the conference room where the pastor and his son were working. The man was sweaty, and his neck and arms were covered with tattoos.

As the pastor extended his hand, the man began to rant, claiming demons were chasing him. He was a Muslim, and "God" sent him to kill Christians and Jews if they opposed Islam. They were infidels.

The pastor remained calm. A former parole officer trained and experienced in dealing with mentally disturbed persons, he began verbal de-escalation. He got the man to calm down and sit down, offered him a cool drink. Meanwhile, he detected a gun-shaped bulge in a pocket, then saw an ammo clip, so he stepped into the hall to "situate the kids."

In the hall, the pastor whispered to his wife and another person, "We have a problem. Get everyone out." As they evacuated the church, the pastor also left. The man soon left too, but drove off in the opposite direction of the church members. Police were already on their way (911 had been called).

The man came back later and left a note thanking the church for their kindness. He was later caught. His record included drug use and robbery.

The pastor began considering security measures, because if there were another incident, it could end tragically.[2]

Henrico, Virginia, July 17, 2016 - A man brought a large pit bull into church during the Sunday morning service. He first sat down in one place, then got up and moved, meanwhile unleashing the dog, which began wandering around. Attenders started moving out of the way. The man refused to call the dog back and re-leash it. It turns out the pit bull was a service dog. After this, the church reviewed its safety and security practices.[3]

Princeton, West Virginia, October 6, 2019 - A man acting erratically in the street ran into a church about 11 am on a Sunday morning. He went into the restroom and locked himself in. An off-duty police officer saw this. He called for backup, went into the church, and told the congregants to stay calm and remain seated.

Responding officers removed the man from the restroom and arrested him. High on crystal meth, he had done $3,000 of damage while in there.[4]

Sharon, South Carolina, June 14, 2020 - A mostly African-American church's outdoor Sunday Morning service was disrupted during the sermon by a man yelling, making noise, mooning, and shouting racial slurs. The pastor told the congregation to remain calm and not to respond. Sheriff's deputies found out about the incident two days later, and on Wednesday arrested the man, charging him with intentionally disrupting a religious service.

The next Sunday, a mostly white congregation not far away joined them for a service in the same location.[5]

The special downloadable resource for February is "Use of Force: Recommended Training for Your Church's Safety Ministry."[6] Within it is the "Use of Force Training Record." Click *HERE* to get it. If you're not already on the email list for the monthly newsletter The Church Guardian and the weekly updates, you'll be added.

How ready are we to defend the flock? Very few churches have their own sworn police force. Police are trained to defend citizens in the community. If necessary, this includes deadly force. However, as decades of national and local news stories reveal, deadly force is and should be a last resort. This means that those responsible for safety and security need to be prepared to keep situations from becoming deadly.

In only one of the four news stories was there an immediate threat of a mass killing, and it ended peacefully, thanks to a cool-headed pastor who knew what to do. Another incident with an armed offender could have been much worse.

The elements of a safe and effective defense are readiness, remaining alert, recognizing threats, and retaining control.

Readiness for a safe and effective defense with proper use of force begins with learning what kinds of disruption the church may face and continues with knowing the state's use-of-force laws, planning, setting policies and procedures, training, and practice.

One oft-repeated motto is, "The price of liberty is vigilance," namely watchful awareness. Situational awareness is the front line of defense in church safety and security: What is around you? How is it changing? What or who is new? Does anyone need help? Does anyone look distressed or angry? Is anything out of place? Does anyone act suspiciously? What activity is taking place outside?

In the first news story, the pastor was alert, taking notice of the situation, the demeanor of the subject, etc.

Be aware of any weaknesses in the building's defenses, especially poor access control. Are doors and windows secure? Are doors locked when they are unattended? Are surveillance cameras monitored? Are the greeters trained to observe those entering the church? Are key places in the church unwatched?

Another form of alertness is threat assessment, both formal and informal. Members of the Church Safety Committee, the Safety Director, and other key persons in the church (such as counselors and pastors) share what they know or have learned about people in the church, families and acquaintances of church attenders, and persons in the community. Obviously, any notifications from law enforcement will be discussed. These discussions are confidential for a number of reasons:

In Sutherland Springs, Texas, a member of a church was threatened by her son-in-law, who had been to the church and was familiar with the building and their practices and schedules. Some in the church were uneasy when he showed up at a church event about a week before his attack.[9] Three questions I have are:

(1) Did the member tell church leadership about the threats?

(2) Were these threats reported to the sheriff's office?

(3) Did church leadership consider what to do in case he attacked?

There are several signs of threats.

First of all, a verbal threat may be communicated to the church in writing, a phone call, etc. or be relayed by someone who overheard or was told by the person making the threat. Law enforcement may become aware of a threat and notify the church.

However, not all threats come with explicit warnings. Therefore, we need to recognize the signs of a threat of disruption and indications that it may be violent, and we should recognize signs that someone needs to be protected, defended.

To these we can add signs of potentially disruptive persons. There are signs of distress. Distressed people are more likely to become agitated and lash out. A few reasons for this kind of distress are financial trouble, job loss, death of a close family member, broken relationships, and health issues. Some persons may be mentally ill. Mental illness has been a factor in several violent encounters, including suicide-by-cop encounters with law enforcement officers.

These factors often show in the person's face, the way they walk or stand, gestures, the way they speak. It is easy for a distressed person's conversation to become an argument. Be aware of heated conversations on the way to becoming open arguments. Here is where verbal de-escalation is key to avoiding violence.

Sometimes a distressed person comes in already angry. Will you see this? A person already intent on violence may or may not be pacified, depending on their makeup. If this is immediate rage, they can be delayed long enough for their anger to cool.

On the other hand, there may be someone with deep-seated deadly intent. These persons are often suicidal, focused on killing until killed. Signs of this deadly intent can be, like the man in Tyler, Texas, profuse sweating, dressed for battle, and nervousness. On the other hand there are, as described by some, "killers without a conscience" - at least they seem to be without a conscience. They may, like the shooter at Wedgwood Baptist Church in 1999, come in with their weapons under wrap.[12] Can we pick up on the threat coming in the front door? The cigarette may not have been intended as a distraction, but it became one, and no one noticed that the visitor was armed until he began shooting. On the other hand, the shooters in Antioch, Tennessee,[13] and Sutherland Springs[9] began shooting outside then came into the church still shooting. In Colorado Springs, the church had been warned about the killer, and the security team was ready for him. He began shooting outside and was stopped in the foyer.

An effective defense against violence depends on retaining control (or regaining then retaining). First, we need to retain control of ourselves. Here is where conditioning, training, and drills prove their worth.

In conditioning, we learn how to control our reactions so we can think rationally. Sometimes we have to re-compose ourselves with techniques such as deep breathing.

Training equips us with knowledge of what to do in certain situations. Sheepdog Church Security has training courses on several topics, including Active Shooter Response[14] and Use of Force.[1]

Drills give us practice in our response skills so we do not have to figure out what to do during an incident. They are also part of conditioning, enabling us to retain self-control in an emergency.

In Tyler, Texas, the pastor retained control in the situation. The man in camouflage did not even pull the gun out of his pocket. The pastor was trained and experienced in dealing with criminals and mental cases, and this paid off.[2] He was so effective that the man left a note thanking him for his kindness. Almost unbelievable!

There are also many stories, told and untold, of situations which never became violent because someone in the church intervened, stayed cool and in control, and defused tensions. This is defense which really worked. When we look at levels of force, these incidents never got above the second level, even when they had the potential of going all the way to the top. As in Proverbs 15:1, wrath was turned away.

We can come to the defense of the church from violence by Readiness, Remaining Alert, Recognizing Threats, and Retaining Control.

There are two more articles in the series on the Use of Force in Church Security. They are "How Forceful?" (The Continuum of Force), and "Lawful Force" (Use of Force Laws). The Closer Look article at the end of the month is on the 2001 shooting at the Greater Oak Missionary Baptist Church.