The Who's Who of Child Safety 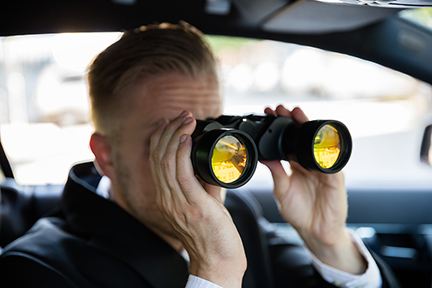 The Bible does not link us to a list of sexual offenders. Nor does it tell us how to identify them. It does tell us to be watchful.

Now I beseech you, brethren, mark them which cause divisions and offences contrary to the doctrine which ye have learned; and avoid them (Romans 16:17).

Wherefore by their fruits ye shall know them (Matthew 7:20).

Many of us know about "Who's Who" books and lists. These are periodically-updated lists of notable people, especially prominent persons in society, often with biographies .This began in Great Britain in 1849, and has spread to other countries around the world.[3] Now there are "Who's Who" lists about persons in various fields of endeavor, including crime, and even of cartoon and comic book characters.

For protecting children, youth, and vulnerable adults from abuse, we could use a "Who's Who" of sexual offenders. Now we have the equivalent in the Dru Sjodin National Sex Offender Public Website.[1]

Chicago, Illinois, prior to the COVID Pandemic - Watchful church personnel noticed a visitor who seemed suspiciously over interested in children. One of them greeted the man and engaged him in conversation. Now having his name, gauging his age, and knowing where he was from, they conducted a search and learned that he was a registered sex offender. They contacted him and referred him to a church which has a program that ministers to sexual offenders.[4]

Nationwide, August 2019 - A Fox News story disclosed that sex offenders are still getting into volunteer and staff positions in churches. This happens, even though more churches using background checks to screen applicants for staff and volunteer positions. Many churches settle for light and inexpensive checks, while insurance companies and security experts recommend more in-depth checks through service providers who re-screen regularly and extend searches to local levels (county and city). Sometimes data in the Dru Sjodin National Sex Offender Public Website (NSOPW) is not up-to-date (though it is a good start in the search) because many states and local jurisdictions do not submit their data in a timely manner. Additionally, there are legal reasons why some cases are not entered, including plea deals for lesser charges.[5]

A case in point is a man registered as a sex offender in both Florida and Alabama who became a minister in a Florida church (in a town other than where he was registered). A tip to the National Center for Missing and Exploited Children led to his arrest for child pornography. Alabama's registry was non-responsive at the time of his arrest (system error), Florida had not updated the data entered into the National Sex Offender Registry (he was still listed as in jail), and that man had failed to register locally when he'd moved.[6]

The subject of this article is discussed in a videocast on the YouTube channel Sheepdog Church Security Academy (the audio is in a podcast on Sound Cloud). Kris Moloney applies his experience in church security as well as that of an officer in the military and in law enforcement. Besides weekly articles, Kris also covers Lessons Learned from Church Shootings and has Sheepdog Interviews with other experts in church security. Subscribe to this channel so you do not miss any programs.[7]

In the comment section below the video screen is a link to the Show Notes (an article summary). This PDF can be downloaded and printed to share with others.

What Offenders Are in Our Community?

Laws in several states require prison systems to notify victims of violent crimes when the perpetrators are released, whether they've completed their sentences or are paroled. Similarly, a person convicted of sex crimes is required to register as a sex offender in that state and in the local jurisdiction of residence. When moving, the offender should register at the new address. Failing to register at a new address is a crime.

Sex offender registries are used by organizations screening applicants to see whether they are registered offenders. These same organizations and citizens concerned for their own safety and that of their children can find out what offenders are in their areas and how close they are.

When a person is applying for a position, either paid or volunteer, by law we must inform them that we conduct background checks, and before we do one they must sign a form acknowledging that they know there will be a background check and that they agree to it.

In the case of Dru Sjodin, Grand Forks, North Dakota (the city where she studied and worked) was on the state line, and her assailant lived and was registered in the next state (Minnesota). Therefore, the university, city law enforcement, and mall security could not be alerted to his presence. If the national registry had been publicly available in 2003, as it is now, police and security in Grand Forks could have seen what registered sex offenders (RSOs) lived within a certain radius and have gotten his photos and description. There would then have been a chance that someone would have recognized him, especially since he had been there often. After all, frequently sitting in the mall watching women would be suspicious behavior, especially for an RSO - and this was recorded by security cameras.[8]

A Church That Used It

The news story from Chicago shows one way this works for churches. The man who visited was not an applicant for volunteer work, but observant church staff and volunteers considered his behavior suspicious. A friendly introduction gathered enough information for a search by name on the NSOPW, and they discovered he was a RSO. Fortunately they had a way to both protect their children and direct him to spiritual help.

Your Church Can Use It

Congregational leadership, especially in the children's ministry, the youth ministry, and the church safety ministry, can also use the NSOPW to find out what RSOs are within a certain distance from the church. According to the NSOPW, these are primarily those "who, in most cases, have been convicted of sexually violent offenses against adults and children and certain sexual contact and other crimes against victims who are minors."[9]

*Note: it says "in most cases." Depending on the original jurisdictions, this may or may not include certain actions, and plea deals can reduce the level of charges.

The best results are available by selecting "All Registries." Here you select your state, territorial, or tribal jurisdiction.

My Test Run in Ohio

As a test, I searched within 5 miles of the address of my church in Ohio (for Ohio the radiuses to choose from are 0.25, 0.5, 1, 2, and 5 miles). Nine RSOs live in this radius, 12 work or volunteer there, and none attend school or have other kinds of addresses in this circle. Combining the kinds of addresses, there are 21 offenders in 19 locations (two work in one location and three in another). There is also a link to Non-Mappable Offenders in Ohio.

On the list is a photo of each offender with the address and the level of the offense. These levels are specified in the Adam Walsh Act of July 27, 2006 (AWA): Tier I. Tier II, and Tier III. Offenses committed before this law are marked Pre-AWA.

Clicking on a name brings up specific information about each offender, including a detailed description of the person, the offense, gender and age group of the victim(s), date of conviction, and date of release from custody.

Checking national and state sex offender registries is a good place to start to identify RSOs who are in your area or who apply to work for the church, whether as volunteers, staff, or pastors, or - as at the church in Chicago - exhibit suspicious behaviors. This may immediately identify concerns with a certain person.

However, RSO registries do have limits, and going beyond this lookup may be more than what your people can do. What if the applicant's record is not yet there or reduced charges keep the offender(s) off the list?

An important service of PMM is continuous monitoring to catch any events posted or happening after the person has started working at the church. Your church can sign up with Protect My Ministry as a Sheepdog Church Security affiliate.[10]

The behavior of children may indicate possible sexual abuse, and the behavior of adults or youth may raise concerns that someone is an actual or potential sex offender. There are warning signs of each. Under the NSOPW's "Safety and Education" tab is the section "How to Identify." Two of the sub-sections are "Concerns about a Child or Teen Who May Be Acting Out Sexually" and "Concerns about an Adult's Interest in Children, or Your Own."[11]

There is a normal rate of development by children of interest in and knowledge of their bodies, as well as their interest in sex (especially of how babies are made). When children appear to know more than what is normal for their stage of development, this is cause for concern. The natural question is, "How did this boy or girl get to know this much about sex?" This is especially concerning when they appear to be acting out sexually. From the NSOPW page, here are the warning signs:

Get professional help if these signs are observed. Childcare workers, teachers, and youth leaders should report these concerns to the pastoral staff, ministry leaders, and the Church Safety Director. Why to more than one person? What if one of these persons is involved? Then another person can investigate and report this to the proper authorities.

Sex offenders most often exhibit telltale behavior patterns. Some of these can be by persons who are not sex offenders, but have a pull in that direction (in this case they need help) - some of these adults may have been abused when young. Here are NSOPW's "Adult Behavior Warning Signs" -

*Note: the "or Your Own" in the title of this sub-section suggests that some of these points may serve as a self-check for whether the reader is leaning that way (or that an observer may become suspicious). If this is you, get help.

All members of Church Safety Teams are encouraged to be trained and certified through the Safety Member Certification training program. The three available formats are:

A key training module in the program is "Protecting Children from Abuse v4." It would be beneficial to have childcare and children's department workers, teachers, youth leaders, and the pastors audit this training module (only $15 per person for Individual Training). In the Online Events schedule, this will be on October 2, 2022, December 11, 2022, February 19, 2023, and April 23, 2023 at 3:00 PM, Central Time.

We need to be able to identify sex offenders to keep them from abusing our children. We can do that through sex offender registries, screening organizations, and observations of behavior.

This is the third article for July. The others are "2017 Sutherland Springs Church Shooting" (Lesson Learned), "Face-to-Face with Evil" (Engaging an Active Shooter), and "Categorically Dangerous" (Hurricane Safety).