When the Shooting Has Stopped 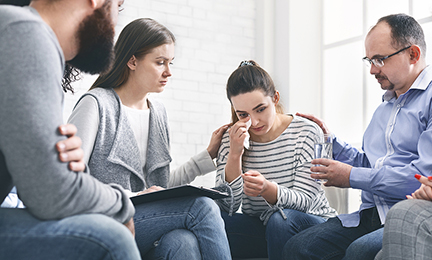 There is no exact parallel in the Bible to an active shooter/killer incident. There are, however, examples and counter examples of actions following victories.

And the next day Saul ... struck down the Ammonites until the heat of the day ... Then the people said to Samuel, “Who is it that said, ‘Shall Saul reign over us?’ Bring the men, that we may put them to death.” But Saul said, “Not a man shall be put to death this day, for today the Lord has worked salvation in Israel.” (1 Samuel 11:11-13)

2. Years later, he did not complete the task –

After Amaziah came from striking down the Edomites, he brought the gods of the men of Seir and set them up as his gods and worshiped them, making offerings to them. And when the Syrians came down against him, Elisha prayed to the Lord and said, “Please strike this people with blindness.” So he struck them with blindness in accordance ... And [Elisha] led them to Samaria … As soon as the king of Israel saw them, he said to Elisha, “My father, shall I strike them down?” He answered, “You shall not strike them down. Would you strike down those whom you have taken captive with your sword and with your bow? Set bread and water before them, that they may eat and drink and go to their master.” So he prepared for them a great feast, and when they had eaten and drunk, he sent them away, and they went to their master. And the Syrians did not come again on raids into the land of Israel. (2 Kings 6:18-23)

Charleston, South Carolina, May 13, 2018 - A feature article in the Charleston newspaper The Post and Courier describes the role of firms that specialize in crime scene clean-up. The shooting at Emmanuel AME Church on June 17, 2015 was one of three well-known crimes where experts at one company did the cleaning, which was paid for by advocacy groups. Any violent criminal incident with serious wounding or deaths and property damage requires clean-up. At that time, this may be emotionally too much for those already traumatized by the incident, and may require professional services.[2]

Charleston, South Carolina, and Dallas, Texas, June 17, 2015 - Right after the shooting at Emmanuel AME Church in Charleston, the chaplain of Parkland Hospital in Dallas, Texas (where President Kennedy was taken when he was shot) was comforting a family who'd just lost their grandfather. Her cell phone buzzed repeatedly. When she answered it, she learned of the shooting. Later, she learned that her mother was killed. According to an article in Our Sunday Visitor, "She said that it took about two years for her to publicly proclaim that she forgave him [the killer]."[3]

Pittsburgh, Pennsylvania, October 27, 2018 - When a hate-motivated shooter opened fire in a synagogue during Sabbath services, lives were saved by members and first responders trained in Stop the Bleed.[4]

Roseburg, Oregon, October 1, 2015 - Minutes after the news went out of a mass shooting at Umpqua Community College, pastors in the Roseburg area held prayer circles, opened their churches to families of victims and students, teachers, and staff of the college, and offered their services. This included comfort and counseling as well as facilitating visitation with hospitalized victims, connections with funeral homes, and help with ordinary tasks in the face of tragedy.[5] This was not a church shooting, but churches responded to needs after a college shooting, the same needs that would result from a church shooting. In a recent videocast, Jimmy Meeks told Kris how the massacre in Sutherland Springs affected the lives of the survivors.[6]

Chisholm, Colorado, December 11, 2008 - The father of Tiffany Johnson, who was killed at the Youth With A Mission training facility in Arvada, found comfort and peace not only in his faith, but in hearing stories of how his daughter helped others and by helping others himself.[7]

After the Shooting Stops

When a play ends, the curtain drops, the cast comes out in front of the curtain, takes a bow, then exits. It's over. What the audience does not see is the cast cleaning off makeup and changing into street clothes, the stage crew taking down the set and putting it away, the custodial crew cleaning everything in sight and out of sight, and so forth.

When an active killer has been stopped (neutralized) - whether killed, incapacitated, or captured - that's not the end of the incident. There are many things to do, both immediately and over a long period of time. We cannot hope to cover everything involved in dealing with the aftermath of an active killer incident, but we can briefly address some issues, such as Tending the Wounded, First Responders, Reports, Legal Issues, Cleanup and Repair, Evaluation and Planning, and Tending the Traumatized.

The shooting may go on for several minutes or end quickly. In most cases, it will end before any first responders arrive. Thus it is important to take care of those who are wounded as soon as it can be done safely. Long before the incident, members of the church who are medical professionals or have been trained in First Aid and/or trauma response should be identified. Other church members should be encouraged to take First Aid, including controlling severe bleeding. That way, even when the Safety Team is involved with the killer, someone can tend to the wounded.

Begin with triage. Locate the wounded. Ascertain the living and the dead. Treat the most critical first. Shootings, stabbings, and slashings result in severe bleeding, the leading cause of death in these incidents. It must be controlled as soon as possible. Also, the extreme stress may trigger a heart attack.

Clear the way for first responders. Have someone at the door to let them know the situation and show or lead the way to where the killer is. All armed persons in the building should holster their weapons when law enforcement arrives. The police are now in charge. If the killer is alive and captured, they will arrest him. Cooperate with the police. Answer all questions. Do not make sudden movements, shouts, etc. If they say to clear the area, clear out. NO jokes!

When medics arrive, let them lead in treatment. Follow their directions and give them room to work.

Don't forget the incident reports. Ideally, each member of the Church Safety Team who was involved should file a report. Let the high blood pressure of the emergency ebb before filling out the report, but don't wait too long. These reports may be accessed during the police investigation. They will be used when evaluating the Safety Team's response and will be important in dealing with legal issues.

There may be legal issues to deal with in the aftermath of an active killer incident. Depending on state laws and the stance of local prosecutors, this will involve use of force, citizen's arrest, weapons permits, corporate and personal liability for injuries and loss of property, and insurance issues. Some may sue for dereliction of duty in protecting those present. Training records of involved team members could be examined. Your threat assessments could be questioned.

Then there are privacy issues for everyone who was there. What measures can legally be taken to protect privacy from the probing press, curious strangers, and those who want to take advantage of the situation.

It's hard to imagine the mess that could be created in an active shooter incident. Even one person shot can make a nasty mess, coupled with bullet holes, broken windows and light fixtures, smashed doors, etc. That mess has to be cleaned up and repairs have to be made. However, don't begin cleaning until the police investigators give clearance after they have what they need for their investigation.

Consider having a professional crime-scene cleanup firm do the job, especially if there are advocacy groups paying for it.[2] First of all, they are trained and equipped to do it. Also, for members of the church who were there, cleaning up may be like reliving the trauma.

The church needs to know where to go from here. The Safety Ministry needs to know how well they did and what could have been done better. The goal is to improve security. For example, the church in Sutherland Springs saw where they had security gaps. They installed cameras and outdoor lights so someone inside can see what's going on outside.[8] Using the evaluation, the Safety Committee and Safety Director can plan how to improve policies, procedures, and training.

This begins the day of the incident and can go on for years. The survivors of an active killer incident and families and friends of the victims need immediate attention with care and understanding, such as through grief counseling and support groups. This then continues for as long as needed. PTSD is just as much a reality for them as for soldiers in a war.

An active shooter/killer incident will leave its marks on a church. These will last long after the shooting stops. This includes its effect on the congregation and the community. What we do can and will make a difference.

This series on the Active Shooter Response has two other articles: "Our Wall and Our Shield" (Hardening the Church against Active Killers) and "Encounter" (Responding to an Active Killer).