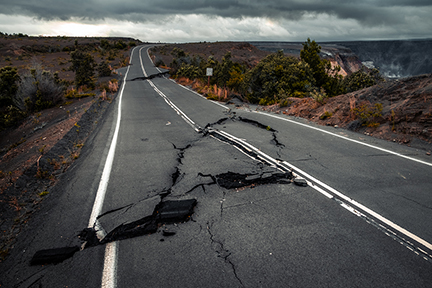 Based on the Sheepdog Church Security Training Course “Severe Weather and Natural Disasters.”[1]

OThe words of Amos, who was among the shepherds of Tekoa, which he saw concerning Israel in the days of Uzziah king of Judah and in the days of Jeroboam the son of Joash, king of Israel, two years before the earthquake (Amos 1:1).

... And you shall flee as you fled from the earthquake in the days of Uzziah king of Judah (Zechariah 14:5).

For nation will rise against nation, and kingdom against kingdom, and there will be famines and earthquakes in various places (Matthew 24:7; see also Mark 13:8 and Luke 21:11).

Now Mount Sinai was wrapped in smoke because the Lord had descended on it in fire. The smoke of it went up like the smoke of a kiln, and the whole mountain trembled greatly (Exodus 19:18).

The Lord … looks on the earth and it trembles, who touches the mountains and they smoke (Psalm 104:32)!

The earth opened and swallowed up Dathan, and covered the company of Abiram (Psalm 106:17; see Numbers 16:32).

But by the same word the heavens and earth that now exist are stored up for fire, being kept until the day of judgment and destruction of the ungodly (2 Peter 3:7).

Hutchinson, Kansas, January 19, 2020 - A magnitude 4.5 earthquake struck during a church's Sunday morning service. There was no damage to the church building, but it knocked items off shelves and pictures off walls. There was some damage to chimneys and sidewalks in town.[3]

Puerto Rico, December 28, 2019 to present - Beginning on December 28 with a Magnitude 4.7 tremblor, Puerto Rico is being shaken by a continuing series of earthquakes. As of February 21, 2020, there have been eleven quakes Mag. 5 or stronger. The biggest one so far was 6.4 on Jan. 7. Many church buildings have been heavily damaged, including historic ones. Several denominations, missionary agencies, and Christian relief organizations are helping congregations on the island.[4][5][6]

Kalapana, Hawaii, 1990 - When lava from a Kilauea eruption was overrunning the village of Kalapana, the little Star of the Sea Church was moved out on a flatbed truck trailer to a high place in nearby Kaimu where it is now a tourist attraction. Services are occasionally held there.[9]

Tectonic disasters can be extremely terrifying events. It is as though the earth itself has turned against you, moving the ground out from under you and throwing hot rocks, ash, and molten lava at you. Churches are not exempt from their threats:

We have a free download for severe weather and natural disasters - "Emergency Supply List Recommendations (Essential supplies to have on hand in a disaster or emergency event)." To receive this free download, click here.[10]

When the Earth Trembles and Belches Fire

The writers of the Bible were familiar with volcanoes and earthquakes. During the Exodus the Israelites experienced both in their 40-year journey from Egypt to Canaan. Archaeological seismologists have identified the general area of the epicenter of the earthquake during King Uzziah's reign (Amos 1:1; Zech. 14:5) as north of the Sea of Galilee. Noting the damage done in Israel and Judah as well as in other nations, they rated it about Magnitude 8.[11] In Psalm 104:32, the psalmist uses quakes and volcanoes as examples of the Lord's power and glory. Jesus said that earthquakes would continue until he returned - we still have them today.

Earthquakes start in faults (cracks in Earth's crust). Their strength is measured by Magnitude (Mw). A whole number higher in magnitude is ten times as strong. For instance, Mw 5.3 is 10x Mw 4.3.

The Mw 8 Uzziah earthquake in 760 BC was the strongest quake in that area in 300 years. In recent years, scientists were able to measure the damage, which was major. We have no descriptive record of the quake from that time, but it is evident there would have been many casualties.

The news stories show only a few of the many instances of church buildings damaged by earthquakes in the United States and the Commonwealth of Puerto Rico. Add to these those damaged elsewhere in North America and the Caribbean, and it shows a significant overall risk of earthquake damage. Some areas have a higher risk than others. More than half the states in the U.S. have a reasonable risk of a moderate to strong earthquake. This includes the part of the Mississippi River bordering the State of Missouri, where the three Mw 7+ New Madrid quakes were centered in 1811-1812.

There is only a 1/168 chance that any one quake will hit during any one Sunday or Sabbath Day morning service (one hour out of the week), as the one in Hutchinson did, but a strong quake in another hour could make the sanctuary unusable, as happened in Louisa County, Virginia.

In preparing for an earthquake, our primary goal is saving lives and preventing injuries. This applies to both the building and its contents.

Building - A building can be made safe from earthquakes up to a certain strength. Part of this depends on the underlying soil. A sedimentary basin will amplify and resonate with the shaking. Part depends on the type of construction.

There are codes for each type, whether wood-framed, steel-framed, or masonry. For example, in 1984, a Seattle congregation bought a surplus elementary school from the city school district. They had to retrofit it to the 1975 state earthquake building code for brick buildings[12] before they could get an occupancy certificate and move in.

Contents - Here is the real hazard for the level of earthquake your church is most likely to face: falling objects. It does not take much of a jolt to knock books and other things off a shelf or the wall, knock off objects hanging on short straight pegs, or topple free-standing bookcases and cabinets. Just look at photos of quake damage in stores! A heavier jolt can bring down hanging lights (especially heavy chandeliers).

There are a few things you can do when an earthquake strikes. If you can, get outside and go far enough from the building that a wall can't fall on you. If you can't get out right away, head for a corner of the room or get under a table or desk. Stay away from things that can fall on you.

Unlike with earthquakes, volcanic vulnerability in this country is limited to certain areas. These are the Pacific Coast and the Aleutians, Hawaii, American Samoa, Puerto Rico, and the U.S. Virgin Islands. There is a lesser vulnerability in the Rockies[13], the Intermountain Region, and the Appalachians[14] (any place with hot springs or steam vents).

We tend to think that the dangers from a volcanic eruption are ash and gasses, flying rocks, pyroclastic flows, lava, and accompanying earthquakes (including landslides). However, most North American volcanoes have glaciers and snowpacks. Most of the property damage in the May 18, 1980 Mt. St. Helens eruption was caused by mudflows from melted snow and ice clogging rivers, breaking bridges, and covering fields and roads.

An eruption dumping mudflows into rivers going to large population areas could cause a lot of damage and threaten lives, even at a considerable distance[15] - hopefully there's enough warning for a mass evacuation. Many churches would be in these areas. Could you warn your congregation to stay away from the area if your church was in the way? If your church was in a safe area, are you ready to shelter refugees? If a sister congregation is in the affected area, could you take them in?

If your church is where it could be threatened by volcanic activity, are the records duplicated in a safe site?

Not every church has an equal chance of a strong earthquake. Most have a reasonable chance of a light tremblor, which could knock books off shelves and clocks off walls, or a moderate quake, which could cause some damage. Even less equal is the chance of volcanic activity threatening a church. We should find out what the chances are for our location and prepare accordingly.

There are five articles in this series on Severe Weather and Disasters. Besides this one are "It Ain't Over 'til It's Over" (Winter, That Is), "Twisting in the Wind" (Tornadoes, Thunderstorms, and Lightning), "A Burning Problem" (Wildfires, Drought, Extreme Heat), and "Human Error" (Disasters Caused by People).