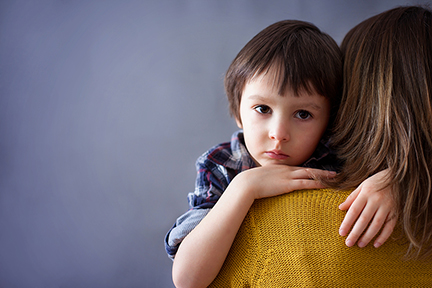 Based on the Safety Member Certification training module "Protecting Children from Abuse" and the Safety and Education: How to Respond section of the Dru Sjodin National Sex Offender Public Website.[1][2]

* This was a rather extreme response to a seduction, but it does show the natural emotions of a family to the sexual abuse of a member:
And Jacob heard that [Shechem] had defiled Dinah his daughter: now his sons were with his cattle in the field: and Jacob held his peace until they were come. ...
And the sons of Jacob answered Shechem and Hamor his father deceitfully, and said, because he had defiled Dinah their sister: And they said unto them, “We cannot do this thing, to give our sister to one that is uncircumcised; for that were a reproach unto us: But in this will we consent unto you: If ye will be as we be, that every male of you be circumcised,” ...
And it came to pass on the third day, when they were sore, that two of the sons of Jacob, Simeon and Levi, Dinah's brethren, took each man his sword, and came upon the city boldly, and slew all the males. And they slew Hamor and Shechem his son with the edge of the sword, and took Dinah out of Shechem's house, and went out (Genesis 34:5, 13-15, 25-26).

* Another case, this time a brother’s reaction to his sister’s rape by their half-brother. The brother later killed his rapist half-brother:
And Absalom never said a word to Amnon, either good or bad; he hated Amnon because he had disgraced his sister Tamar (2 Samuel 13:22).

In the Dr. Seuss story How the Grinch Stole Christmas!, the title character determines to spoil Christmas for the residents of Whoville by stealing decorations and gifts.[3]

For children and youth in our churches, there are Grinches of another kind. Holidays, especially Christmas, provide sexual predators with more access to potential prey. This is reason enough for churches to be especially vigilant against sexual offenders seeking to spoil Christmas for our children and teens by stealing their innocence.

In spite of our efforts, sexual abuse may still happen. For instance, young persons who are being abused elsewhere, such as at home (domestic sex abuse) or at school, may come to our church. When they do, we need to know how to respond. How do we stop the Grinch?

* How one church wrongly responded to a member's domestic sexual abuse:

Bisbee, Arizona, 2010 to 2017 – A man being counselled by the lead pastor of his congregation confessed that he had been molesting his 5-year-old daughter. The pastor called the help line of his denomination for advice on reporting this to law enforcement. Since Arizona law allowed priests to not report confessions of sexual abuse, the person on the help line said the pastor should not report. The same thing happened with the next pastor. The abuse continued for another seven years.

The man's abuse of his children (by this time he was abusing an infant daughter) finally came to the attention of law enforcement through videos he made of the sexual abuse. This was reported by someone in another country who contacted U.S. authorities after seeing some of his videos online.[4]

* One of these two churches would obviously not report the abuse, but the other church might not have known about it until the suspect's arrest.

A girl, age 14, told Rancho Cucamonga police that the pastor had sexually abused her from 2010 to 2015, beginning when she was younger than 10.

News stories did not disclose how the Riverside youth leader was reported, so the source may have been anonymous or confidential. Police believe that there are other victims.[5][6]

Northeast Baltimore, Maryland, October 2013 – An adult male tipped the police that he had been sexually abused by the youth leader at a NE Baltimore church 16 years earlier. They arrested the suspect, who had held several positions in that church, including the time of the abuse. The victim, who was a teen at that time, had been a member of the church.[7]

Jacksonville, Florida, March 9, 2022 – Police raided a Wednesday night church service and arrested the pastor and two former pastors. Each was charged with sexual abuse of a minor. All offenses were decades earlier. The reporting victim said she'd been abused by the pastor 20 to 30 times. The sheriff's office had received the complaint in 2003, but at the time of the news story there was no reason given for the 19-year delay in making an arrest. [8]

This article is discussed by Kris in a videocast. This is on the YouTube channel Sheepdog Church Security Academy (the audio is in a podcast). A link to the Show Notes (summary) for this article is beneath the video screen in the Comments section for a week – until the next article is posted. This downloadable PDF can be printed or attached to a message and shared with others.[9]

There are two outstanding parallels between a sex offender and the Grinch.

First, note how the Grinch raided Whoville homes under cover of night. In a setting like a church, school, daycare center, youth sports team, scout troop, etc., the offender will sneak in. Oh yes, he will openly express interest and apply for a position, but he has more motives than wanting to help.

Second, just as the Grinch lied to get out of a tight spot, sex offenders lie to hide their intentions and cover their tracks.

You find out that a young person in the church is being sexually abused. What should you do? This depends on a few factors:

The choice of responses includes Report, Support the victim(s) and the family/families, Confront the abuser(s), and Assess and correct child safety practices.

The Dru Sjodin website says, "If a child or teen reports abuse, call 9-1-1 or child protective services for local assistance immediately. Be sure to get support for yourself from other trusted adults who are not involved directly with the abuse."[2]

This should be a no-brainer. Unfortunately, it is too often neglected. This could be for various reasons:

An attitude of self-sufficiency. Sometimes leaders in the church believe that they can handle this without help. Well, this is naïve at best. If you simply fire and/or excommunicate offenders, they can go elsewhere and abuse someone else.

Ignorance of reporting mandates. Reporting of sexual abuse is now legally mandated in the United States. Some states recognize pastoral and counselor confidentiality. However, some have exceptions to this when the abuse is ongoing so victims can be rescued. In some states, the confidant still has the option of reporting the abuse (i.e. the confidentiality is not mandated). It pays to know your state's laws on reporting sexual abuse.

To protect the church's public image is the worst reason for not reporting sexual abuse. First, this is wrong because it is dishonest. Second, the abuse will eventually be known outside the church, and the church's image will be worse because the crime was hidden than it would have been if acknowledged and dealt with in the first place. The Bible says, "He that covereth his sins shall not prosper: but whoso confesseth and forsaketh them shall have mercy" (Proverbs 28:13).

Cases in point are now notorious. News stories abound about individual churches and entire denominations brought into disrepute because they covered up sex offenses.[10][11][12]

The Child Welfare Information Gateway has information about reporting sex abuse.[10] There are several hotlines for help and reporting, such as Childhelp National Child Abuse Hotline ( 800-4-A-CHILD, Darkness to Light (866-FOR-LIGHT), and National Center for Missing & Exploited Children (800-THE-LOST, TDD: 800-826-7653).[11][12][13]

Victims and their families are hurt people. They need support. When anyone in the church has been sexually abused, we need to come alongside. Sex abuse brings shame. The Dru Sjodin site says that our "reaction is very important and could affect how the child feels about themselves later."[2]

The support of older youth and adults who'd been abused several years earlier differs a bit.

The offender needs to be confronted by someone in the church, no matter who he or she is. First tell them they've been reported in a child sex abuse case. See what their response is, whether they confess, make excuses (rationalize), or deny. If it is denied, that is not always wrong. Sometimes a false accusation may be made or there is mistaken identity. Since we are not law enforcement, let the police do their investigation to find evidence. If they are guilty, the evidence will usually be more than just the accusation.

If the person is not someone who had to have a background check by the church, their record would be a hidden page. Check the offender lists for where they live and have lived so you can be informed in your dealings with them. Past offenses do make a difference.[14]

This is the internal response. Any sexual abuse case in the church should trigger an assessment. In all cases, this should include evaluations of how the abuse was discovered, how long it went on before being discovered, and the response. The evaluation of the response includes care for the victim and the victim's family, and of the results of that care at the time of the assessment. If this was domestic sex abuse, this could be a tricky situation, especially when the abuser also attends the church.

If the abuse itself was not connected to the church (in the church, on church-owned property, at church-related events, or by church personnel), go ahead anyway and review and assess all child protection policies and procedures and how they're carried out.

Quarter 1 of the 2022-2023 Online Events school year is finished, and two classes of Quarter 2 have been completed. The next class is "Deescalating Disruptive Persons" on December 4. If you enroll now, you can begin with the next class and continue until you've passed all of them.

Training modules can be audited (taken without the certification test) at a lower tuition. This enables certain persons to take the class addressing their roles in the church. For "Protecting Children from Abuse" this includes the pastors, elders, youth leaders, Sunday School / Sabbath School teachers, and childcare workers. It should get them all on board with preventing abuse.[1]

Complementary to the "Protecting Children from Abuse" training module is the Church Security Guide article "Protection of Children and Vulnerable Adults in the Church."[15][16]

Another training tool is the "Safety and Education" section of the Dru Sjodin National Sex Offender Public Website.[17]

The goals of our response to sexual abuse are (1) to stop sex-offending Grinches from abusing the victims, and (2) to keep them from abusing others.

The next article is "2022 Tulsa Cathedral Stabbing and Arson Attempt" (Lesson Learned).