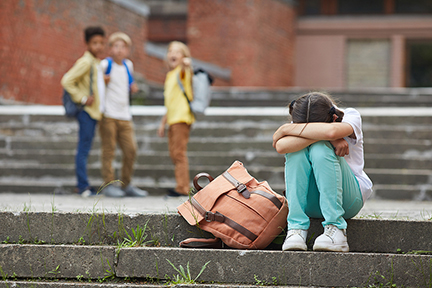 The Bible does not directly address bullying as we know it, but it does condemn unjust treatment and tells us how to respond when we are treated unjustly.

There are six things that the Lord hates, seven that are an abomination to him: … hands that shed innocent blood, a heart that devises wicked plans, feet that make haste to run to evil … (Proverbs 6:16-18).

“…do not oppress the widow, the fatherless, the sojourner, or the poor, and let none of you devise evil against another in your heart” (Zechariah 7:10).

For this is a gracious thing, when, mindful of God, one endures sorrows while suffering unjustly (1 Peter 2:19).

“Be strong and courageous. Do not fear or be in dread of them, for it is the Lord your God who goes with you. He will not leave you or forsake you” (Deuteronomy 31:6).

For over 20 years, awareness of bullying in schools has been growing. Bullying itself is nothing new. For instance, in 1951 the Territorial School in Nome, Alaska, did not let First Grade pupils go to the restroom alone because of bullying by older students.

Children who are smaller, weaker, or noticeably different are often targets of bullies. In general, bullies are cowards, because they pick on those who are weaker or otherwise defenseless. Some bullies, but not all, themselves had been bullied, but many bullying victims become champions of the weak.

With all the programs in place to prevent bullying, it still happens, as in the featured news story. The real question is, "What can we and should we do when we learn that children in the church are being bullied?"

This article has been added to the ones for January following publication of the featured news story, which highlights the issue of bullying.

Cincinnati, Ohio, January 24, 2017, December 29, 2020 - A third grader who had been bullied since the First Grade was brutalized and knocked unconscious in the boys' restroom. Two days later, following another bullying incident, he hanged himself after getting home from school. The parents sued the school district for wrongful death due to negligence, failure to report, failure to discipline the bullies, misinforming the parents, etc. by school administrators. The school district claimed immunity. Almost four years after the boy's death, a Federal Appeals Court's 3-judge panel ruled that the suit can go to trial.[2][3][4]

For two-and-a-half school years, the boy was hit, his belongings taken and damaged, yelled at, and cruelly teased. The most serious assault was partially captured by a school security camera which showed the boy falling, his feet protruding into the doorway from behind a wall. Bigger boys are moving around, some run out from the scene. Other students enter and leave the restroom, some of them kicking the unconscious boy. Then a school employee in a suit appears about five minutes after the assault, moves a trash can, then looks at the boy until the school nurse arrives two minutes later.[4]

Several instances of bullying are recounted in the lawsuit, and it alleges that in most cases the true cause and nature of injuries were not revealed to the parents, neither were they allowed to view surveillance footage. Also, comparing the school's records to state-mandated reports revealed that, although the school administration knew of bullying in the school, they did not report it to the state as required, which was evidence of deliberate malfeasance. These allegations and findings led to this statement in the court's opinion:

"In Taye's case, the Plaintiffs allege that had Taye's mother known the level of bullying and trauma her son had experienced as a student at Carson Elementary and the actual facts surrounding her son's injuries on January 24, she would never have let him continue to attend school at Carson Elementary."[5]

Sheepdog Church Security has a free downloadable special resource for this month, "A Code to Live by: A Childcare Giver's Code of Conduct for Your Church's Safety Ministry."[6] When you get it, you will also be subscribed to our weekly email updates and the monthly newsletter The Church Guardian. Just click *HERE*

According to StopBullying.gov[8] (a website managed by the U.S. Department of Health and Human Services with content from several federal agencies[9]), "Bullying is unwanted, aggressive behavior among school aged children that involves a real or perceived power imbalance."[10] Here we call it "Peer Abuse" because it is children or youth being abused by those close to their ages as opposed to being abused by those much older.

A pattern of bullying includes (1) an imbalance of power, and (2) repetition.

Bullying is stronger persons abusing weaker ones. A single instance does not necessarily constitute bullying (there are exceptions, such as serial bullying), but when the abuse is repeated or shows the probability of repetition, it is considered bullying. In serial bullying, the bully does not continually pick on just one person, but bullies a number of persons, some once, some two-or-more times.

The three types of bullying are:

Bullying is often a social phenomenon where members of a peer group try to move up in the "pecking order" or to protect their ranking by pushing others down. The current national focus is on bullying in schools, but churches also need to be aware of it and seek to prevent or minimize it

Those who are more likely to be bullied are somehow seen as inferior or different. The target person may be smaller, have trouble speaking, be poorly coordinated, have certain disabilities, be autistic, have Attention Deficit Disorder, be racially or ethnically different, have physical features seen as disfiguring, be from a socially "inferior" family, have unpopular views, be considered stupid or not as smart, arouse jealousy, etc.

How Does the Bible Address Bullying?

The Bible does not name bullying as such, but does say a lot about how we relate to each other which does not leave room for bullying. Let's look at a few statements.

Leviticus 19 says much about dealing fairly with each other:

"When a stranger sojourns with you in your land, you shall not do him wrong" (v. 33).

In Matthew 20:25-27, Jesus said that his followers should not be jockeying for power or social position:

Therefore, we have a spiritual mandate to not be bullies. Derived from that is a mandate to protect the weak and disadvantaged from bullies. Discouraging bullying among children in the church or a church school is part of "bringing them up" in the ways of the Lord. It then seems reasonable and biblical for a church to adopt non-bullying policies and procedures.

The first step in preventing bullying is to decide to do it. It may not be a known problem in the church at the time, but it is something you do not want in your church. If church leadership is not concerned about it, the Church Safety Committee and Safety Director can raise their awareness. For one thing, failure to do anything about bullying can result in lawsuits, such as in the featured news story. This public school district is being sued, but this could just as easily be a church or a Christian school if the bullying ended in tragedy or serious harm.

The second step is to formulate and enact anti-bullying statements, policies, and procedures. The policies define bullying, state that it is not tolerated in classes, in activities, or on church property, and require it to be reported. The procedures outline how the policies are implemented and enforced.

The third step is the statement, making the anti-bullying stance of the church known. All persons working with children and youth as well as all the pastoral team are informed. Then a public statement lets everyone know that bullying is not condoned, nor is it tolerated.

The fourth step is education. Teach all the teachers, children's activity leaders, and youth leaders what bullying is, how to spot it, and how to deal with it. Part of this education is the SDCS training course on Protecting Children from Abuse.[1] Education also includes fostering within all classes and groups a spirit of respect for everyone.

The final step of preventing bullying is responding to it. This is a real key to prevention. Solomon said, "Because the sentence against an evil deed is not executed speedily, the heart of the children of man is fully set to do evil" (Ecclesiastes 8:11). Simply put, if some get away with bullying, others feel free to do it. Actually, this applies to all forms of abuse. The Cincinnati lawsuit alleges that bullying and violence in general had become commonplace at the school in question. It was a toxic and unsafe environment.

As with other kinds of abuse, we cannot respond until we know it is happening. Know what to look for:

In a bullying case, there are two persons to deal with, the bully and the victim. This is the role of pastors, teachers and group leaders, but a Safety Team member who observes an act of physical bullying or taunting can at least step in with, "Stop that. Leave him [or her] alone." This can be followed up by a word to the offender's teacher or group leader, who can talk with the parents or guardian [some domestic situations may call for caution here].

Confront the bully. Let him or her know that those actions are unacceptable and a violation of the rules. Apply the consequences named in the policy or procedures appropriate to the level of the offense and the age of the offender. Consistency in this serves as a deterrent.

For the bully, this may be a teaching moment. Most bullies are insecure in some way. While letting him or her know that bullying is wrong, try to discern what is motivating this behavior. Make the consequences of bullying clear while encouraging understanding of and respect for the victim. Since these are minors, their parents or guardians must be brought into the process.

The victim of bullying needs understanding and help. Try to find out why this person is the bully's target. Some behaviors or habits (such as poor hygiene) may invite bullying. If that is the case in this instance, the child or youth may need counseling or training in improving his or her behavior or habits. This is not a role of the Safety Team unless the team member is also a pastor, teacher, group leader, or counselor.

Depending on its severity and state law, bullying may be a reportable abuse. Check the laws of your state and the guidelines of your county's child protection service. Also consult with your church's attorney. At the very least, inform the parents or guardian. In the Cincinnati case, the school and the school district did not inform the parents or misinformed them. That was part of the claims in the lawsuit, and individual persons named as defendants were described as "former" school staff.[5]

Protecting children and youth from abuse should include peer abuse - bullying. More than detecting and dealing with abuse by bullies, pastors, teachers and group leaders will try to create an environment of respect where -

Three other articles are in this series on Protecting Children from Abuse: "We Resolve" (to Serve the Least), "Wolves among the Lambs" (Alert for Abuse), and "With Our Wings" (How to Protect the Vulnerable).