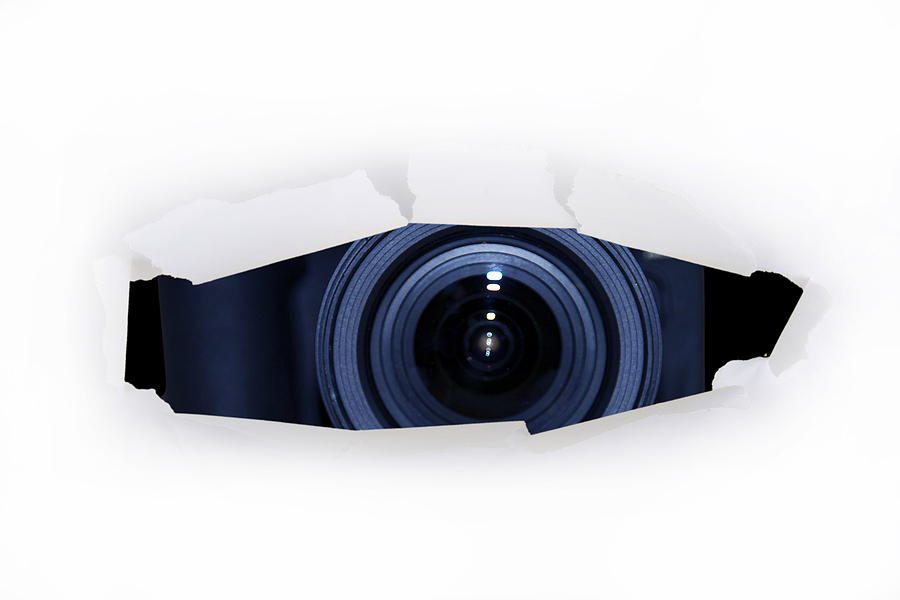 Evil men spy on the godly, waiting for an excuse to accuse them (Psalm 37:32).

Do not spare these evil, treacherous men. At evening they come to spy, slinking around like dogs that prowl the city (Psalm 59:5b-6 Living Bible).

And Ham, the father of Canaan, saw the nakedness of his father and told his two brothers outside (Genesis 9:22).

It happened, late one afternoon, when David arose from his couch and was walking on the roof of the king's house, that he saw from the roof a woman bathing; and the woman was very beautiful (2 Samuel 11:2).

You have set our iniquities before you, our secret sins in the light of your presence (Psalm 90:8).

Many of us have seen an illustration of a man standing on an apple box (when they were still made of wood) to reach a window. There he tried to see through a gap at the edge of the window shade or between the curtains. If the window was partly open (this was before air conditioning), he would move the shade or curtains just enough to see better.

If the woman or girl in the room noticed that he was peeking in, she’d let out a scream, and the question was whether he could jump off the box before he fell off. When she looked out the window, all she could see of him was his heels.

Who was this man? We call him Peeping Tom.

Sherwood, Oregon, April 26, 2015 – A teenage boy found a camera disguised as an outlet next to the toilet in a restroom used by the priest and the altar attendants. The priest delayed reporting it to the police, as he had promised, until confronted by the father of the boy. By then the camera was missing. Police believe that the priest either did it or knew about it.[1]

Lafayette, Indiana, May 15, 2012 – A pastor was dismissed after he was arrested for voyeurism. He allegedly mounted cameras disguised as air fresheners in women’s restroom stalls.[2]

Newark, Delaware, November 11, 2019 – A hidden camera was found in the women’s restroom of a real estate office on November 11. Images were recorded on the camera’s card. Seven days later, a real estate agent was charged with planting the camera. The agent was also listed as the pastor of a church in a nearby town, but by that time, the church’s rented hall was vacant.[3]

Several locations in the nation, July 10, 2013 to April 14, 2017 – A Daily Beast article states, “Over the past few years, there has been a rash of hidden cameras found recording in church restrooms and locker rooms across the country.” Beginning with the Sherwood, OR, case, it lists five other cases (one in a synagogue): two in California (Sacramento and Salinas), another in Oregon, and one each in Indiana and Washington, DC. And this is only a small sample of restroom voyeurism.[4]

Our special free download is “Safety Member Training Record,”[5] an Excel file which has the template for training records (3rd tab), including training/certification and drills. Copy this form for every Safety Team member. It also has instructions (1st tab) and information about training and drills (2nd tab). Click *HERE* to get it. You will also be signed up to receive the weekly email update and the monthly newsletter (The Church Guardian) unless you are already subscribed.

With modern technology, Peeping Tom does not need to stand on a box to look into a window, hide behind a curtain or in a closet, or peek through a keyhole. He does not even have to be present, thanks to modern technology.

Hidden cameras are not really new. Miniature film cameras have been around since World War I. However, now film does not have to be removed and developed. Many, like the one in Sherwood, Oregon, record images on a data card.[1] Others feed the images (and sound, for some) wirelessly to a recorder or to the user’s computer or smart phone. Apocalyptic passages in the Bible describe creatures that are full of eyes (Ezekiel 10:12; Revelation 4:8). That seems to be the case for many hotel rooms, bed-and-breakfasts, dressing rooms, and restrooms.

As revealed in the news stories, places of worship are not exempt from personal spying. Understandable is a surveillance camera covering the safe and the money-counting room or the nursery and childcare center. These are to ensure integrity and child safety, and the cameras are usually not hidden or disguised unless placed as part of an investigation. But a hidden camera in a locker room, baptismal changing room, or restroom is an invasion of personal privacy and a violation of the law.

The Harm of Voyeurism in the Church

Some people may consider peeping (voyeurism) no cause for concern and laugh it off – that is until they discover that they’ve been spied on without their knowledge or consent. Beyond being embarrassing, there is real harm done to the church and those who use its facilities.

First of all, this is a very real personal threat to those who’ve been peeped. Voyeurs are often also sexual abusers. Many use their images to select victims. Others use images for blackmail. Even when a person has done no wrong, she does not want those images made public or revealed to certain other people. Considering this, it is no wonder that voyeuristic spying is illegal.

Second, this “sneak peek” behavior reveals poor character. It is counter-relational to spy on someone’s private moments to satisfy one’s lust. It is dishonest and leads to further dishonesty, such as in Sherwood, OR.[1] Concealed observation is justified if it is part of a legitimate investigation of wrongdoing or is a security measure.

Finally, it damages the church. An oft-quoted statement from the Bible is, “Be sure your sin will find you out” (Num. 32:23). Sneaky peeky activity will sooner or later be found out. This will definitely be an embarrassment for the church. Would-be visitors will be reluctant to come, and some church members may stop coming. It will harm the church’s witness in the community. It will also be a legal liability. If the cameras were planted by a church employee or volunteer, that person could face criminal charges and the church could be sued.

It takes more than privacy blinds, wider window shades, and heavy drapes to block today’s Peeping Tom. You have to look for and find those hidden cameras. This should be easier for Safety Team members in their own church than for a hotel guest, a fitness enthusiast in the gym’s locker room, or a customer in a store’s public restroom. The means of finding those concealed peepers are Observation, Visual Sweeping, and RF Sweeping. One or more of these methods are used during patrols inside the building.

Observation is used on every patrol. Be aware of anything that seems strange or out of place. This is easier – even natural – when you are familiar with the rooms you are checking on. Every member of the Safety Team should become familiarized with all the rooms in the church, including restrooms, baby changing areas, new mothers’ lounges, childcare area, nursery, baptismal changing rooms, locker rooms, etc. (this list naturally depends on the size and programs of your church) so they notice right away is something is not right.

Not all of these items are normally found in restroom, but many are (I’ve marked them with >). One of the signs to look for is a wire not where you expect it to be. If any “ordinary” object seems suspicious, check it out. Also check under the edges of the vanity.

This is not for every patrol because of the time it takes, but should be done regularly. Sometimes the item hiding a camera is the right thing in the right place. So how do you know a camera is inside? Visually sweep the area with a camera spotter or your smart phone. Use the light on the camera with the room lights off to scan the room. Look through the eyepiece or on the screen. Watch for light reflected from the lens. There are apps or settings to detect the beams from motion detectors if the camera is equipped with that.

RF sweeping is looking for wireless cameras using radio frequencies. There are apps such as Fing that will search local WiFi networks for all devices communicating over the Internet. Look for names of camera manufacturers or use of video protocols.

What if you find a hidden camera?

There are many websites with advice on how to find hidden cameras. Just enter “search for hidden cameras in public restrooms” on Google, Bing, or DuckDuckGo and you’ll get more results than you can handle. It’s a really in-demand topic.

The featured course for this article is Security Team Fundamentals v4. Among the basics of Safety Team duties is Patrols. The church building(s) should be patrolled both inside and out. This course is available for Classroom (Training Bundle)[7] and Individual (Online)[8] training. It is also included in the Safety Member Certification (Individual)[9] and Complete Church Security Training System v4 (Classroom)[10], which include all courses in one package.

We do not like having our privacy violated. Neither do others who come to our churches. Yet there is now the constant threat of being videoed in a restroom or locker room at church. The Safety Team can protect the privacy of everyone by frequently searching the restrooms and other privacy areas for hidden cameras.