Keeping the Flock Safe from Fire 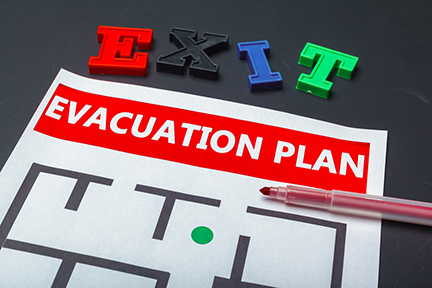 Save others by snatching them out of the fire (Jude 1:23).

If anyone's work is burned up, he will suffer loss, though he himself will be saved, but only as through fire (1 Corinthians 3:15).

Southport, North Carolina, September 22, 2019 - A fire broke out in a church on a Sunday morning. All members present were safely evacuated.

Cedar City, Utah, February 7, 2019 - An electrical fire prompted evacuation of the daycare center in a church. Work was being done at the time on underground utilities.

San Francisco, California, August 29, 2019 - After construction workers struck a gas line, a church and its school were evacuated.

Seattle, Washington, March 18, 2016 - An unpleasant odor resulted in the evacuation of a church and its daycare center. The cause of the odor turned out to be a leaking can of Axe Body Spray. Although the cause turned out to be benign, precautions were taken to protect the occupants until the source was identified.

Suppose a fire starts in a waste can and is put out immediately, then the can is taken outside to a safe area just in case of re-ignition. There's no need to get everyone out. But if the fire can't be put out right away, and the burning object cannot be removed from the building, people have to be evacuated to a safe area.

Getting people out of a building in an emergency may be easy with a few persons who've always come, a simple layout, and everyone close to the doors. But when you have a hallway with rooms, classes and/or meetings in session, and some people are there who are not familiar with the place, evacuation can become chaos with the potential of tragic results.

Orderly and safe evacuations do not just happen. They are planned. That is the lesson of the 1958 Our Lady of the Angels School fire.[6] More than 90 persons perished because they did not know what to do in case of fire. Evacuations need to be planned. The routes should be kept ready at all times. Everyone needs to know what to do and practice it.

There is more than one purpose for an evacuation. The Sheepdog Church Security training course "Arson Prevention and Fire Drills for Churches"[1] lists four types of evacuations, named for their purposes: Protective, Preventative, Rescue, and Reconstructive.

Evacuations are safer and more effective if done in an orderly manner. Many fires in occupied buildings have turned tragic when persons present panicked and rushed the doors, resulting in bodies piled at exits.

If the church needs to be evacuated during a service or classes, pre-planned actions prevent chaos:

How will people be notified that there is a fire and they need to evacuate?

In the sanctuary, instruct the crowd to follow the ushers for their section of the auditorium. Teachers, activity leaders, and study group leaders will guide their classes and groups. 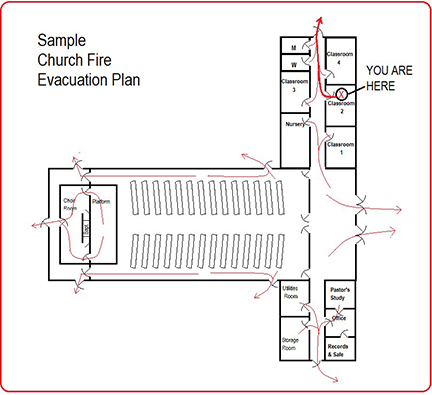 Use a floor plan of your church building. Mark each outside door. Mark each exit from the sanctuary and from the fellowship hall. Mark each classroom, office, meeting room, and restroom door. This is your evacuation map.

There should be outside doors around the church which are easily accessible. The more people who will be inside, the more doors you need. This includes one for each side of the sanctuary/worship center. Each hallway should lead to an outside door. A second floor should have stairways leading to outside doors, including one which is not in the lobby/foyer. If these standards are not met, plan on correcting the situation

Plan the route to an exit for each classroom and meeting area. Two aims of this are (1) have short enough routes, and (2) avoid bottlenecks. A general rule is half the classes on a hall exit at one end, half at the other. Have those in the sanctuary exit through different doors from those the classrooms use.

Designate an assembly area. It has to be a safe distance from the building and not in the path of incoming emergency vehicles. It should be able to hold everyone from a full church.

Print the evacuation map and post copies in different areas of the church. The general rule is one in each hallway, in each classroom, and in the office. Each copy has its location marked on the map and the evacuation route highlighted.

We all know that this preparation will lead to fire drills, but not yet. First, we have to test the evacuation plans with a dry run, a mock fire drill. Bring together all Safety Ministry personnel. Also bring in the pastoral team, the church staff, leadership, and several volunteers, especially teachers.

Go over the evacuation routes. Consider the different groups and locations in the church, such as nursery & childcare, the elderly and disabled, and how to empty a full sanctuary. Also plan what to do when someone is injured or ill. This is not only a test run, but training for those leading in an evacuation, a leaders' drill.

Do the dry run with participants in every location in the church. Time the exit route from each room. Have some participants practice moving mobility-impaired persons.

After the dry run, evaluate the results. What is the potential for traffic jams in the corridors? Are the halls and doors wide enough for two lines at the same time coming from classrooms? Is there any way the plan can be improved, such as re-routing one class?

Following the test evacuation, revise the plan if needed. This can be done right away for some suggestions, such as, "Let's see how it goes if we do this instead …" Re-do the dry run with the change(s).

If this the first fire drill your church has done - or if it has been many years since the last one - this will be a new experience for some. Most of the school-age children will do well, since they have fire drills at school. Not all adults will be equally cooperative. Some will feel that they already know their way out. This is why you are having a drill. Which route you take depends on where you are when evacuation is called for. After all, it's not good to have people going against the flow unless there is a definitely good reason, such as a Safety Team member going in to check on someone or to help a mobility-impaired person.

Set the date for a fire drill. This can be at the end of a service. Plan an afternoon dinner so they have a reason to stay instead of everyone running to their cars. If your church has a daycare center, a pre-school, or an elementary and/or secondary school, also have a fire drill during the week.

Ask the fire department to have someone there. They can observe and help in the post-drill evaluation. It also provides an air of seriousness with a fire truck sitting in front of the church.

Let the congregation know that there will be a fire drill at a certain time on a certain date. Educate them on what to do and where to go, such as, "Those in front of this window go down the side aisle and out the door there. Those by and behind the window go up the side aisle and out the side door." Tell them that the teachers will take their children to the assembly area and take the roll there.

Now is the day and the time. For example, as the worship team begins the closing song, the chairperson interrupts and says, "This is a fire drill [the congregation had been told at the beginning of the service that there would be a fire drill]. We will evacuate the building. Follow the ushers for your part of the auditorium [pointing to the waiting ushers]. Parents, your children will be in the assembly area."

The usher at the end of the front row motions the people out, as does the one by the back row. They continue row-by-row until they meet. Each follows his or her section out, closing the door behind them [this is a fire-control measure].

As the congregation gathers in the assembly area, teachers account for their pupils. The Safety Team members who have checked for stragglers come out. After the all-clear, the congregation and guests are invited to the fellowship hall for the church dinner.

Later that day, the Church Safety Committee, other church leaders, and the visiting firefighters meet to share their observations and evaluate the fire drill. How well would this work in case of a real fire? Were there any problems, such as with the nursery or the mobility-impaired? Can we improve the procedure? If so, how?

When it is time to get out, and do it now, it is too late to plan and drill. When many people are in the church building, we need to already know what to do and where to go.

Other articles in this series for Fire Safety Month are "Spark" (How Do Fires Start?), "Quench It" (Fire Suppression), and "Block It" (Preventing a Conflagration).