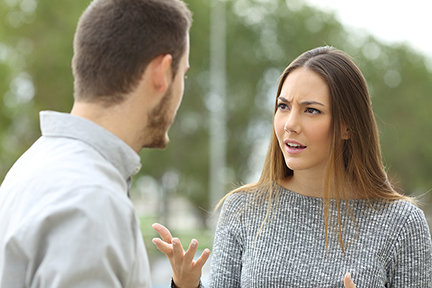 When the plague of leprosy is in a man, then he shall be brought unto the priest (Leviticus 13:9). Wherefore the king said unto me, “Why is thy countenance sad, seeing thou art not sick? This is nothing else but sorrow of heart.” (Nehemiah 2:2). But Jesus perceived their wickedness ... (Matthew 22:18). Be ye angry, and sin not: let not the sun go down upon your wrath; Neither give place to the devil ... Let all bitterness, and wrath, and anger, and clamour, and evil speaking, be put away from you, with all malice (Ephesians 4:26-27, 31). “For I perceive that thou art in the gall of bitterness, and in the bond of iniquity” (Acts 8:23). Now I beseech you, brethren, mark them which cause divisions and offences ... (Romans 16:17).

When someone “goes postal,”* we often hear people say, “We never saw it coming,” or “I did not know he would go this far.” Later, we learn of stresses in the person’s life. Often it is anger that has built up until it finally reached the breaking point.

*“Go postal” is American slang for suddenly becoming very angry, even violent. The term was coined after several cases of postal employees shooting their co-workers. A term for workplace violence, it is now applied to shootings in other places, such as government offices, schools, and churches.[2][3]

The identification of a potentially disruptive individual by a greeter, an usher, or a church safety team member rarely if ever makes the news, especially when verbal de-escalation calms the person down, preventing violence. In this case good news usually becomes no news.

Washington, D.C., May 24, 2015 - Police investigated a "suspicious vehicle" parked where no parking was allowed on a street bordering the National Mall. In it they found a pressure cooker and suspicious odors. The bomb squad was called in. They took the pressure cooker to a safe place and detonated it. It was a bomb. The driver of the vehicle was traced, found, and arrested.[4]

New York City, New York, undated - In response to attacks on places of worship, the Anti-Defamation League has issued guidelines for discerning suspicious behavior. A key item of advice is, "The most important thing is to be observant."[5]

Paisley, Renfrewshire, Scotland, October 9, 2021 - A driver crossing a bridge saw a teenage girl trying to climb over the rail. The driver called police on her cell phone. On the other side of the river, she turned around to come help the girl and saw that police had already arrived. They talked the girl out of jumping and brought her down safely.[6]

Philadelphia, Pennsylvania, April 24, 2016 - Success, then tragedy, happened in a disruptive situation in a church:

A young visitor became vocally disruptive when informed that he was sitting in someone's seat. An usher and a pastor came and defused the situation. The visitor then sat quietly.

Later, a middle-aged church member (not a member of a safety/security team) who had seen the original outburst came to the young man. Holding a gun on him and showing a badge (bought online), he told the visitor to leave. The young man thought the gun was a fake, like the badge, and said so. When the middle-aged man did not back off, the young man pushed and hit him. The older man shot and killed the younger man.

The shooter was arrested and charged with voluntary manslaughter. In the arraignment he claimed it was self-defense, but the judge said that was not sufficient reason for shooting in this case.[7]

Since verbal de-escalation had worked, the man should have left well-enough alone. He had shown his gun in other situations before. Judging by that, he should have been barred from bringing his gun to church.

Special resources for November are a free download (Behavioral Emergencies: Dealing with people in crisis), a training module in the Sheepdog Church Security Training Academy (Deescalating Disruptive Persons v4), additional training through an affiliate membership (the Worship Security Association), and an article in the Church Security Guide ("Disruptive Individuals: How to De-escalate the Situation").

The special download for this series is Behavioral Emergencies: Dealing with people in crisis. It is a three-page PDF file. It briefly covers

The Sheepdog Church Security Training Academy has seven modules, each on an important aspect of Church Safety & Security, beginning with the fundamentals. The module "Deescalating Disruptive Persons v4" has two objectives: helping persons in need and preventing violence. The topics covered include:

The Academy itself is part of the Safety Member Certification program.[9]

Additional training is available from the Worship Security Association (WSA). Most of the lessons are geared toward church leadership, especially security and safety directors. However, team members may also benefit from the content. Membership is available through Sheepdog Church Security's affiliate relationship with WSA.[10]

Disruptive Individuals: How to De-escalate the Situation

The Church Security Guide on the SDCS website has a rather extensive article on verbal de-escalation. It has six sections:

The final statement is, "Use force only when it is necessary to protect yourself and others."[11]

Driving at night in the Fall in Ohio (and in some other states, too), you have to be alert for signs of deer: motion close to the road, retinal reflections, etc. If one crosses the road up ahead, watch out for more to come. If you've ever had a deer encounter on the road, you'll be even more alert to avoid another encounter.

In everyday life, most of us are picking up cues as to what another person is doing and where they will be next. We don't want to run into them or have them run into us. We read faces, tone of voice, and body language to gauge a person's character, mood, or state of mind. In one biblical example, people around the fire in the high priest's courtyard could tell that Peter was a Galilean, therefore one of Jesus' disciples, by his accent (Matthew 26:73 and Mark 14:70).

In keeping a congregation safe from violent disruption, prevention is better than response. If we discern that someone is a person of risk, we may encounter them early enough to resolve the problem enough to keep a situation from escalating into violence. In terms of the use-of-force continuum, successfully using the second level (voice) can preclude advancing to higher levels. There are warning signs indicating that a person may become violent. A good source is the Canadian equivalent of our federal OSHA, the Canadian Centre for Occupational Health and Safety (CCOHS). Much of the following is taken from their page, "Violence and Harassment in the Workplace - Warning Signs."[12]

These behavioral signs from CCOHS cover a longer time than the immediate moment, and many can be considered trends in behavior. People who are attending the church may already be at risk for violence or may be moving in that direction. Intervention during this period with referral to those equipped to work with these persons may be the best thing to happen to them.

The CCOHS document has this advice:

[Many of the signs refer specifically to the workplace, so we have filtered the list to make it apply to churches.]

A confidential consideration of persons of risk by a few church leaders and the Safety Director (Threat Assessment Team) may lead to help for these people. This includes not just those with the signs in the above list, but persons in the church community (members, attendees, and their families) who are going through factors that may lead to disruptive behavior: family problems, financial problems, substance abuse, medical conditions, mental illness, and death of a loved one. The Church Safety Director can also take measures to have the Safety Team be especially alert for any of these signs and be ready to step in with verbal de-escalation.

When a person may become violent at any moment, they often show physical signs which can be seen. The Canadian list has 13 signs:

Come to think of it, aren't some of these the same cues that we pick up on daily in people around us?

Practice observing people on a daily basis. This can include drills with someone playing the part of a disturbed person and others identifying the signs. Videos of real encounters may also be used. Pause the video and ask, "What do you see here?" After team members answer, resume the video and let them see how it plays out.

The old proverb is, "An ounce of prevention is worth a pound of cure." When we see disruption coming and respond early, we may prevent violence and its price.

Since this November has five Mondays, there are five articles for the month. The other four are: "The 2007 Neosho First Congregational Church Shooting" (Lesson Learned), "Dialing Down the Heat" (Dealing with Disruption), "A Calming Conversation" (Conversational Engagement with a Disrupter), and "The 2007 New Life Church Shooting" (Lesson Learned).