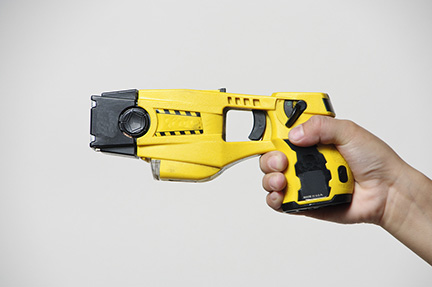 An article in the Sheepdog Church Security series on Gear, Guns, and Weapons Qualification

Take the helmet of salvation and the sword of the Spirit (Ephesians 6:17).

And he put shields and spears in all the cities and made them very strong (2 Chronicles 11:12).

And Uzziah prepared for all the army shields, spears, helmets, coats of mail, bows, and stones for slinging (2 Chronicles 26:14).

White Settlement, Texas, December 29, 2019 - When a suspicious person pulled a shotgun from his coat during a Sunday morning service and shot two people, the head of the Security Team waited for a clear line of fire and downed the gunman with one shot. The Security Team leader had been trained in situational shooting and himself was a shooting trainer.[1]

Krugerville, Texas - The founder of NOCSSM (National Organization for Church Security and Safety Management), Chuck Chadwick, is training members of church safety teams in active shooter response. Interest has increased since the Southerland Springs and White Settlement church shootings. Training goes beyond how to shoot in various situations to controlling situations through other means, such as verbal de-escalation and escort holds.[2]

High Springs, Florida, January 2020 - Church members are being trained in responding to an active shooter by Protect His House. The owner and primary instructor is a former sheriff's deputy.[3]

Our special resource for July is Recommended Essential Equipment.[5] To get it, just Click Here.

Reflections on the Bible

After the secession of the northern tribes, King Rehoboam fortified several cities in his kingdom for defense and supplied them with weapons (2 Chron. 11:5-12).

King Uzziah's equipping of the army included ammunition - stones for slings, which were the ancient equivalent of firearms.[6] A slung stone could leave the sling at over 100 mph. Some slingers can fire at almost 120 mph.

The weapons we have today may differ from those used in Bible times, but their use is alike in some respects - selection, procurement, and training. Now we have added certification. We must choose the weapons we have. Then we buy them and put them in place. Most weapons require some level of training. For some weapons, we need certification, showing that we have had required training and have demonstrated proficiency in their use.

The basic categories of weapons are lethal, less lethal, and non-lethal, but we'll just consider them as two. Some authorities count no weapons as non-lethal, since almost any weapon can conceivably be used in a lethal manner, even if that use is unlikely. Case in point: a pencil can be lethal if stabbed far enough into someone's temple or into the jugular vein or carotid artery.

A few of these items are in the Sheepdog Church Security Store on Amazon (SDCS Store).[7]

A new item in the SDCS Store is a strictly-defensive device. It is the Gotega Door Stopper,[8] sold 2 in a pack. It can be quickly kicked down to keep a closed inward-swinging door from being opened from the outside. If the door is already closed when a lockdown is called, the stopper can be kicked down without first opening the door.

There are many less lethal weapons. Some are modern versions of ancient weapons. For instance the baton is a modern form of the club and the ox goad. Some, such as pepper spray and tear gas, were invented as alternatives to bullets and buckshot. A new version of one ancient weapon, the bola, is being tried out by several law enforcement agencies; it is promoted as truly non-lethal, even non-injurious. Two less-lethal weapons and an accessory are in the SDCS Store: pepper spray, a Taser, and a holster for the Taser. Other less-lethal defensive weapons (not in the Store) include batons, trippers and leg wrappers.

Pepper Spray - The SABRE Advanced Compact Pepper Spray[9] has been in the SDCS Store for a long time. Sheepdog Church Security has this tag on the spray: "INDIVIDUAL CARRY - It is far more likely your team will be involved in a physical altercation than a deadly force incident. This is a MUST." This Sabre pepper spray has a 3-in-1 formula: pepper spray, CS tear gas, and UV marking dye.

Pepper spray works by making a subject's eyes water and be irritated - it also irritates mucus membranes in the nose and mouth. Pepper in the spray - capsicum oleoresin (OC) - also temporarily irritates the skin. This disables the suspect long enough to escape, force him out of the area, or take him into custody.

Taser & Holster - This Taser Pulse Compact[10] is a small model with an LED laser target spotter and two live cartridges. Its range is 15 feet. The lithium battery is replaceable. The Elite Force Holster[11] for this Taser is adjustable for angle on your belt, making it easier to carry concealed, yet an easy draw for use.

Tasers work by firing two penetrating electrodes at the suspect. These electrodes are on wires, and when they make contact, they transmit a stored electric pulse, which overwhelms the suspect's nervous system.

Baton - Sheepdog Church Security does not generally recommend a baton. For one thing, even telescoping models are conspicuous, and are therefore distracting to those attending church. They are also unhandy to carry around hanging from your belt. A more serious concern is its use. A baton has a high potential for deadly use, so several states and jurisdictions require training and certification for batons.

Trippers - This is an impromptu weapon, anything handy, such as a broom handle, which can trip a running suspect. For instance, a broom dropped across the hallway behind you may at least slow down a pursuing attacker. A stick grabbed during an altercation can be used to trip the opponent.

Leg Wrappers, Bolas - This is not common today in America. It is a coiled cord with a weight at each end. To stop a fleeing of approaching suspect, throw it so the two weights go on either side of the legs, with the cord in the middle, the weights will swing around the legs in opposite directions, stopping his progress.

Handguns are the first lethal weapon people think of for Church Safety Ministry use. However, a common tool, a knife, is also classified as a deadly weapon. No other deadly-force devices are often carried by Church Safety Team members.

Knife - Knives are often carried not for defense, but as cutting tools for other purposes. The Schrade SCHA3BS Folding Knife[12] and its uses are described in another article in this series.[13]

Firearms - Firearms have been around for about 500 years, beginning with cannons, and continuing to today's handguns, shotguns, and rifles. They are designed to be lethal, and are used both offensively and defensively. Firearm ownership and possession in the United States is high, thanks to the Second Amendment which guarantees the right to keep and bear arms.

Not surprisingly, firearm use is subject to use-of-force laws.[14] These laws apply to both law enforcement and private citizens. The goal of these laws is to reduce and prevent needless use of deadly force. Associated with these regulations are certain restrictions, such as the legal disability of persons convicted of felonies and violent misdemeanors and those who are mentally ill.

Requirements for certification accompany use-of-force laws. The most widespread certifications are for hunter safety (the original goal of the National Rifle Association) and issuance of concealed carry weapons (CCW) permits. In some states, such as Ohio, the person applying for a CCW permit has to take a class, pass a background check, and demonstrate the safe use of their weapon with reasonable accuracy. In other words, they have to prove qualified to carry a concealed weapon.

On the practical side, it pays to be properly trained in the use of weapons of any kind. The two goals are safety and effectiveness. Can you use a baton without inflicting severe bodily harm? Can you repel an aggressive person with pepper spray without blinding him or her? Will you use a Taser only for defense or to restrain a suspect, not to show your displeasure with someone?

There are organizations and individuals who will train you in the use of firearms and other weapons. Look for shooting ranges where you can practice shooting, not only target practice, but also situational shooting for active shooter response.

Find out what the use of force laws are in your state and locality and how they are applied.

There are several kinds of weapons, besides firearms. The laws pertaining to them vary from state-to-state. Church denominations have differing views on the use-of-force. Choose the weapons appropriate for use in your church's safety ministry and get the needed training, qualification, and certification or licensing.

The other three articles in this four-part series are "Learning and Wearing" (Reading Resources and Apparel for Church Safety Teams), "What's on Hand?" (Tools and Supplies), and "Get the Message" (Equipped for Communicating).