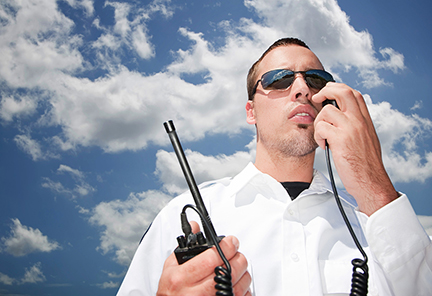 According to the number of all the males, from a month old and upward, there were 8,600, keeping guard over the sanctuary (Numbers 3:28).

And Eleazar the son of Aaron the priest was to be chief over the chiefs of the Levites, and to have oversight of those who kept guard over the sanctuary (Numbers 3:32).

The gatekeepers, Akkub, Talmon and their brothers, who kept watch at the gates, were 172 (Nehemiah 11:19).

The eyes of the Lord are in every place, keeping watch on the evil and the good (Proverbs 15:3).

Not many news articles directly address patrolling of churches by volunteers, but many do highlight the benefits of patrols in general, thereby illustrating the role and value of patrolling the church and its campus.

Daphne, Alabama, April 3, 2019 - A sheriff' deputy on patrol spotted a suspicious man carrying a large trash bag over his shoulder. The bag was filled with items the homeless man had stolen from a church. He had hidden the items in shrubbery around the church and in nearby woods, and was taking them to his camp one bag at a time. The suspect said he entered the church "through an open door."[2]

In this case, the church could have avoided a burglary by ensuring that all doors were locked. An access patrol at the end of every activity at the church would do this.

Church Safety Team members on patrol should take note of anything suspicious and check it out. A crime in progress may be stopped.

Cross Plains Tennessee, September 19, 2016 - A police officer on patrol found a suspicious truck and trailer in the parking lot of a church - the church was on a long drive and not visible from the road, so officers regularly drove up the driveway to the church while patrolling. He sensed something was wrong. First, the truck had out-of-state plates. Second, lawn mowers were being loaded into the trailer, but the grass had not been mowed. Third, items not consistent with yard work were being loaded.

When the driver of the truck was questioned, answers were inconsistent with observations. The officer also spotted a firearm in the vehicle. The occupants were arrested on suspicion of burglary. Items taken from the church were found in the trailer along with other stolen items. The license plate itself had been stolen.[4]

Fortunately, the local police extended their patrols onto the church property. The thieves would not have gotten as far as they had if the church had motion-activated remote alarms and surveillance cameras monitored by Safety Team members - a virtual patrol.

Alabama, (no date) - The Office of the Alabama State Fire Marshall recommends neighborhood watches to prevent church arson in rural areas. Churches are often targets because they are unoccupied most of the week.[5]

Not mentioned in the posting is the role of church safety teams patrolling their churches, but this can be part of the neighborhood watch. Safety team members can visit their church at random times during the week, sometimes back-to-back, while participating in the neighborhood watch. Along with neighbors purposefully roaming the area, criminal activity may be deterred or interrupted.

Washington, DC, August 1994 - The Bureau of Justice Assistance recommends community policing. This is law enforcement officers being present in the community and interactive with the residents. This includes patrolling, both in vehicles and on foot.[6]

Part of the discussion concerns Police patrols, on foot as well as in vehicles. The real value is in community connections. The police are not the only guardians against crime. Members of the community assume an active role in prevention and reporting. Since churches are part of the community, they also have a role. Church patrols by safety team volunteers are part of this fabric, especially when the church maintains good relations with the police and the community.

The SDCS training course Church Security Fundamentals lists the duties of the Safety Team as:

Patrolling includes the first item on the list and overlaps the second. It is not an impromptu or haphazard activity. To be successful, patrolling has to be prepared for, timely, and thorough.

The Safety Team member must be dressed, equipped, and knowledgeable to monitor the church by patrolling.

Dressed for the job - When going on patrol, wear the clothing prescribed for the Safety Team. This means having the Safety Team insignia, whether on a tag or on the clothing itself. This identifies you as a member of the team to anyone who sees you. Church members will know you are "one of us" (not a stranger just poking around), and outsiders will see that this church is serious about security.

Along with wearing identification, let key people in the church know you are there on duty. Not only will they know why you're there, they'll know who to call when they need you.

Also dress for conditions. Remember that you'll be outdoors for much of the patrol. Dress to be warm in cold weather, to be dry when it rains, and to be cool when it's hot. Have shoes appropriate for walking safely anywhere.

Equipped - There are a few essential items you need while on patrol: hand-held radio, camera or smartphone, notepad and pen, flashlight, and multi-tool.

Knowledgeable - There are a number of thing to know when on patrol:

When people are working in the church during the week, it would be good if a Safety Team member is present to be sure outside doors are locked and let in only those who are there legitimately. This team member checks all doors and windows at the end of the workday. When the church is unoccupied, random patrolling sends the message, "We might show up at any time."

A safety patrol of the church has to be thorough, cover all bases. When the safety and security of those in attendance is at stake, nothing should be left to chance. Security Team Fundamentals lists three items:

Watch for several things while on patrol:

This series on the Sheepdog Church Security training course Security Team Fundamentals v4.[1] has four articles. The other three are "What's My Role?" (Duties of a Safety Team Member), "On Call" (Responding to Emergencies), and "On the Record" (Reporting and Filing).