Tectonic Disasters and Other Geologic Events 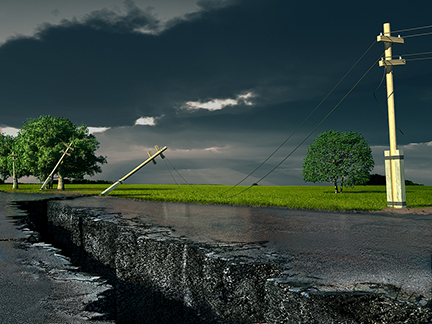 Earthquakes, volcanic eruptions, sinkholes, landslides, and tsunamis – these are geologic events. The first two are tectonic, produced by movements of gigantic plates many miles deep that form the Earth’s crust and by faults (cracks) in those plates. The next two are more local, movements of rock layers closer to the surface and of the soil itself. Tsunamis are produced by underwater earthquakes or landslides, and by terrestrial landslides, avalanches, or glacial calving hitting the water.[2]

Jesus said, “For [the Father] makes his sun rise on the evil and on the good, and sends rain on the just and on the unjust” (Matthew 5:45). As with other natural events, churches are not immune to damaging geologic forces.

And ... the ground under them split apart. And the earth opened its mouth and swallowed them up (Numbers 16:31-32).

And after the wind an earthquake, but the Lord was not in the earthquake (1 Kings 19:11).

And you shall flee as you fled from the earthquake in the days of Uzziah king of Judah (Zechariah 14:5).

From the Cascade Mountains to Montana and beyond, May 18, 1980 - It happened on a Sunday morning. After two months of rumbling and a growing bulge on Mount St. Helen's northern flank, an earthquake caused the bulge to slide, opening up a lava chamber and triggering a massive eruption. As the mountain literally blew its top, losing over 1,300 feet in height, billions of tons of rocks and ash were spewed miles-high, and carried eastward by prevailing winds. Falling ash covered everything for hundreds of miles and dusted the landscape for thousands more. The ash came for nine hours as the eruption continued.

The eruption began a little after 8 am. Ash began falling on Yakima, Washington before most Protestant church services began, but during early Protestant services, Sunday School, and First or Second Mass in Catholic churches. It came during most services in Idaho (Mountain Time), and arrived as many services were ending in Kalispell, Montana. Farther east, many evening services were cancelled. [3][4][5][6][7][8][9]

Charlotte and Sparta, North Carolina, August 9, 2020 - A 5.1 earthquake struck on a Sunday morning. A church in Sparta, near the epicenter, suffered minor damage. Because of pandemic restrictions, the building was unoccupied at the time. In a church in Charlotte, the shock of the quake was felt just as 1 Kings 19:11 ("after the wind an earthquake") had been read.[10][11]

North Naples, Florida, 2012 - Developing sinkholes forced the closure of a church. For a time the pastor was holding services in a church office. By a year later, damage had made the property totally unsafe.[12] The area around Tampa Bay has had several sinkholes over the years. Some experts think this is because of water being pumped out of the aquifer.

Hickman, Kentucky, beginning February 2019 - A "landslide" (gradually widening sinkhole) has been growing closer to a church and its parsonage in Hickman. The underground cause is thought to be either abandoned mine shafts or the collapse of a limestone cavern.[15]

Sulawesi, Indonesia, September 28, 2018 - An earthquake and tsunami killed thousands of people on a Friday. Among the dead were 34 students attending classes in a church when a landslide buried it.[16]

March's special downloadable resource is Emergency Supply List Recommendations(Essential supplies to have on hand in a disaster or emergency event).[17] It has lists for both the church and families. You can get it by clicking *HERE*. This will sign you up for the monthly newsletter, The Church Guardian, and weekly email updates (that is if you're not already subscribed).

The Midland WR300, Deluxe NOAA Emergency Weather Alert Radio is the featured product from the Sheepdog Church Security store (Recommended Equipment for Safety Ministries) on Amazon.[18] It has S.A.M.E. for local weather forecasts and alerts. It also has over 60 emergency alerts, including for other hazards (such as road closures, spills, explosions, etc.). Emergency alerts will override AM/FM radio broadcasts.

Preparing for the Unplanned

Rarely do we have as much warning of tectonic disasters and other geologic events as we do for weather. However, we should know which ones are more likely in our areas and locations.

Strong earthquakes are expected in places such as the West Coast, Pacific Islands, and the Continental Basin (including Yellowstone, Jackson Hole, and the Great Salt Lake), but some occur in the Mississippi Basin and on the East Coast, though not as frequently. Some knowledge of fault lines will indicate where the rare quakes are more likely, such as close to or in the Appalachians (for instance in Sparta, NC[10]).

Normal preparations in quake-prone areas are:

Survivable building construction includes soil and sub-soil evaluation. Some soil/subsoil compositions magnify the shaking. Some older buildings may be made more earthquake-survivable. Also, identify quake-safe places in the church for those who cannot get outside quickly. Teach quake-survival practices, such as getting under a table or pew.

Very few churches are where volcanic lava, pyroclastic flows, or ejected hot rocks are a threat. However, a major eruption, like Mount St. Helens in May 1980, can send mudflows down rivers, flooding fields and towns in thick goo. Cities downriver from Mt Rainier in Washington (Seattle to Tacoma) and Mt. Shasta in California (all the way to Sacramento) face that kind of threat if those volcanoes erupt, melting their glaciers. They can also deliver mountains of ash to downwind communities.

Here is where a weather radio with public alerts[18] is valuable. If clouds of volcanic ash are headed your way and you receive an alert, the Church Safety Director and church leaders can decide whether to shelter in place, send people home, or cancel services/events. This depends on when the ash is expected to arrive. If services, classes, or events must be cancelled, a mass notification system, such as Alert.Church[19], can get the message out.

Most of the time, landslides are weather-related, caused by heavy rain. Sometimes a section of a hill, mountain, cliff, or riverbank has gradually become unstable and eventually gives way in a landslide. Buildings, including churches, may be below or above the slide. Triggers are not always rain or snow, but could be extra pressure or shaking, such as from a small quake, a train, or road traffic. Closely related are rock slides.

Be aware of any slide possibilities for your church's location. What has been the history of landslides in that area, even small ones? When the probability of a landslide is higher, monitoring the danger is more important.

There are places in the United States where sinkholes are a real hazard. In these places are underground cavities which can collapse, and sometimes do. Much of the Florida Peninsula is actually supported by subterranean water. When millions of tons of water have been pumped out for industrial, agricultural, commercial, and residential use, it leaves empty cavities. This is especially true in the areas around Tampa Bay and Miami.

Areas with extensive underground mining, present or past, are also prone to sinkholes, especially many decades after the mine shafts have been abandoned. This is especially true when the shafts are closer to the surface. Support timbers can age and become weaker. Deep shafts are surrounded by more supporting material.

On the other hand, water can constantly erode limestone bedrock, especially if the water has any acidity. As dissolved limestone is carried away, a cavern opens. If it is close enough to the surface, it can collapse, letting the ground above sink.

It would be too easy to tell a church to check the records for abandoned mine shafts or shallow caverns before building a structure. It can be hard to find them. Many older abandoned mines were never mapped or were not mapped accurately, so all you can be sure of from the records is that there had been mining in the area. We should also realize that we do not know where all the natural caverns are. We can check for the history of sinkholes in the area. If you can afford it, have soundings (sonic mapping) done to look for underground cavities which may collapse before deciding where to build. Depending on your location, this mapping may have already been done and recorded.

Tsunamis are large waves of water caused by underwater landslides, underwater earthquakes, or landslides, avalanches, or glacial calving impacting the water from above. When this wave reaches shallow water, it piles up high and can scour the coast. Some tsunamis, such as that triggered by the Sulawei earthquake[16], devastate coastal communities, with no immunity for churches.

Several churches have experienced quakes, volcanic emissions, landslides, and sinkholes, and then discovered that their insurance policies did not cover the damage. After evaluating your church's risk for these ground-based hazards, see whether your insurance policy covers the higher risk dangers. In some cases it's like flood insurance, which has to be added to the standard policies. Look, consider, decide. Some websites such as the Insurance Information Institute [20], have advice about insurance for these kinds of hazards.

There are some natural hazards we cannot actually forecast - earthquakes, volcanic eruptions, sinkholes, landslides and tsunamis - at least not to the same degree as the weather. However, we can know which ones are likely in our areas, prepare for them, and insure against the most potentially costly ones.

There are three other articles in this series on Dealing with Severe Weather and Disasters: "The Will of the Wind" (All Kinds of Windstorms), "Heat & Cold, Flood & Drought" (Extreme Conditions), and "By Human Hands" (Man-Made Disasters). The Lessons Learned article is "The 2002 Our Lady of Peace Church Shooting."