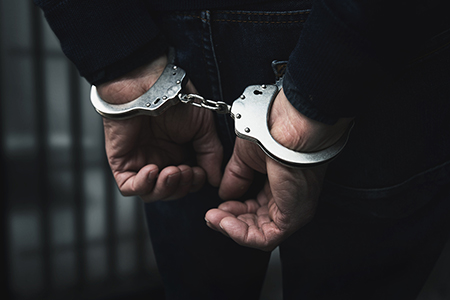 Legally mandated arrest – Then his father and his mother shall take hold of him and bring him out to the elders of his city at the gate of the place where he lives (Deuteronomy 21:19).

Mob seizure/arrest – And when Jeremiah had finished speaking all that the Lord had commanded him to speak to all the people, then the priests and the prophets and all the people laid hold of him, saying, “You shall die!” (Jeremiah 26:8).

Directed citizen’s arrest – And Elijah said to them, “Seize the prophets of Baal; let not one of them escape.” And they seized them (1 Kings 18:40).

Fresno, California, March 2017 - A father found out that his daughter was using a cell phone given to her by a man. This man was sending messages to her which constituted grooming her for a sexual encounter. The dad used the phone to arrange a meeting with the man at the place where he gave the phone to his daughter.

Taking another person with him, the father met the man, executed a citizen's arrest, and held the man for police who took him into custody.[2]

West Jordan, Utah, September 6, 2011 - Mr. A. was told by a woman he knew that her child or children had been molested by Mr. B. They arranged a meeting with the Mr. B. and began to talk with him. When Mr. B. became aggressive, Mr. A. pulled out zip ties and bound his wrists.

Mr. A. then drove Mr. B. to the police station, where both men were arrested, Mr. A. for aggravated kidnapping and Mr. B. for child sexual assault. Under Utah law (at that time), a citizen's arrest could not be lawfully made unless the offense was in the arresting person's presence. This was days after the indiscretion. A police officer said that the people should have had the police go with them to meet the perpetrator. The police could have then made the arrest.[3]

Augusta, Maine, April 22, 1986 - The Supreme Judicial Court of Maine ruled that a police officer made a lawful arrest of a defendant in a neighboring city for OUI and leaving the scene of an accident. The majority said it was lawful as a live pursuit for a felony. A dissenter said it was lawful not for that reason, but as a citizen's arrest for probable cause since the officer saw the defendant operating the vehicle and the other driver identified the defendant and his vehicle.[4]

The series of articles for February 2020 discusses Protecting the Church with Use-of-Force Laws. In this article we consider the use of force in regards to citizen's arrest:

Citizen's Arrest as a Use-of-Force Issue

A citizen's arrest uses some level of force, and some uses of force may be construed as a citizen's arrest even if that is not the intent. Citizen's arrest is covered in the Sheepdog Church Security Training Course "Protecting Yourself and the Church with Use of Force Laws."[1] It uses seven slides of the PowerPoint presentation.

Citize's arrest is a procedure which can easily get out of hand. It can go as far as mob rule and vigilante justice, as happened to Jeremiah (Jer. 26:8). When there are local governments in place with law enforcement and courts, it is in society's best interest to state the limits of when and how citizen's arrest is used (see the second news story above[3]).. Citizen's arrest should not be completely outlawed, since there are times and places when and where this is the only way to interrupt criminal activity. States, therefore, have defined and established limits for citizen's arrest.

What Is Citizen's Arrest?

A citizen's arrest is the restraining of a person who has committed a public offense (broken a law) and is being held for law enforcement officers or court officers. A law enforcement officer who is off duty or out of his/her jurisdiction may make a citizen's arrest, as stated by the dissenting justice in State v. Harding (third news story above).[4]

When to Make Citizen's Arrest

There are times when a citizen's arrest may (in some cases must) be made. The lines may be stretched or tightened by state laws, but simply put they are:

When the public offense is committed in the presence of the arresting person.

When the suspect has committed a felony (not necessarily in the arresting person's presence) - an example of this is recognizing and arresting a known and wanted criminal (such as one whose photo is on the FBI's most-wanted board in the Post Office).

When, in fact, a felony has been committed, and the arrestor has reasonable cause to believe that it was committed by the suspect.

An example of this is what happened in Utah.[3] The law there, as applied to that case, was that the arresting citizen had to be a witness of the offense. When making a citizen's arrest, you yourself do not want to be arrested.

In light of this, the actions of the father in California[2] are questionable. It would have been legally safer to have a police officer present to make the arrest. As it was, the man risked being arrested himself. The difference between this and the Utah story is that the father himself had discovered and held the evidence of the crime. As it was, he did wait for the police to come and take the suspect into custody.

How to Make a Citizen's Arrest

There are right ways and wrong ways to make a citizen's arrest. First of all, do not follow the example of a movie, TV drama, or novel. It might make a gripping scene, but is not necessarily consistent with the law. Here are points to follow (there are more details in the course):

You must deliver the suspect to proper authorities:

What constitutes a citizen's arrest? Since it is defined as "restraining" an offender, this literally includes almost the entire continuum of force. If you tell a person to stop and wait, and that person obeys, then you have restrained/detained them by Voice Commands, and it is an arrest. If you put your hand on his shoulder, it is the 3rd level, Empty-Hand Control, and is an arrest. Using any kind of weapon in making the arrest brings Use-of-Force Laws into play. When handcuffs or tie restraints are used, other legal issues arise.

There are times when a law enforcement officer will order citizens to pursue and/or arrest a suspect. On the Western Frontier, a sheriff, ranger, or marshal often recruited ordinary people into a posse to chase or track down an outlaw.

A modern example is when a defendant in court breaks loose and dashes for the door or a window, and the judge or the bailiff call out, "Seize him!" Anyone along the fugitive's path is obligated to try to stop him.

An example from the Old Testament (1 Kings 18:40) is Elijah ordering the people to seize the prophets of Baal (the king was there letting him do that).

This is not an everyday situation (at least not in most neighborhoods), but there may be times when someone must stop a person committing a crime, especially when lives are at stake. However, we must make a citizen's arrest only when necessary, then do it the right way.

This article completes the Legal Force series on Use-of-Force Laws and Church Safety Ministry. The other four articles are "A Forceful Answer" (When Force Is Called for), "How Forceful?" (The Continuum of Force), "Legal Force" (Federal and State laws on the Use of Force), and "Managing Force" (Training, Practice, Control).