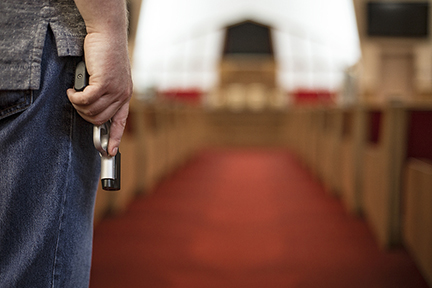 Be thou diligent to know the state of thy flocks, and look well to thy herds (Proverbs 27:23).

He that is slow to anger is better than the mighty; and he that ruleth his spirit than he that taketh a city (Proverbs 16:32).

A brother offended is harder to be won than a strong city: and their contentions are like the bars of a castle (Proverbs 18:19).

Brethren, if a man be overtaken in a fault, ye which are spiritual, restore such an one in the spirit of meekness; considering thyself, lest thou also be tempted. Bear ye one another's burdens, and so fulfil the law of Christ (Galatians 6:1-2).

Many of us have seen someone come into a meeting, party, workplace, etc., and verbally unload a grudge on everyone present. The person may or may not be coherent, and we may or may not know the nature of the complaint. This may just be a blow-off, with the spouter later being apologetic about the outburst. On the other hand, it could be more serious, a dangerous - even deadly - escalation of an ongoing situation.

The Safety Member Certification consists of the Sheepdog Church Security Training Academy and the certification tests. A Safety Team member who takes each training module and passes its certification test will earn a two-year certification as a Sheepdog Safety Member. The modules are Security Team Fundamentals, Active Shooter Response, Deescalating Disruptive Persons, Protecting Children from Abuse, Basic Use of Force Laws, Arson and Fire Safety, and Severe Weather and Natural Disasters.[1]

Click *HERE* to get our free download, the Safety Member Training Record. The third page (sheet) of this Excel file is the template for the training record. Follow the instructions on the first sheet for duplicating it. Do this enough times to have one copy in the file for each Safety Team member.

When you face a violent intruder but do not have a gun (or he is in a crowd), you need something which will be effective. The SABRE Advanced Compact Pepper Spray (Sabre is the defensive spray brand preferred by police) has both CS (tear gas) and OC (Oleoresin Capsicum). It is available in the Sheepdog Church Security store on Amazon. This pepper spray has a clip which lets you put it in a pocket or on a belt. SABRE (Security Equipment Corporation) has an instruction video, "How to Use Your Pepper Spray."[3]

If you use deadly force, even against an active shooter, you will need legal representation. There will at least be an investigation, perhaps with a grand jury. U.S. LawShield, founded by attorneys, is a membership organization with lawyers lined up to represent members in need. Their motto is "Legal Defense for Self Defense." Sheepdog Church Security affiliate memberships with U.S. LawShield are available.[4]

On August 12, 2007, the Sunday afternoon service at the First Congregational Church in Neosho, Missouri was interrupted when a man who had family there, but was not himself a member, shouted for attention. Not to be ignored, he fired two shots from a handgun into the ceiling. Now that all eyes turned to him, he ordered his family and all children to leave the sanctuary, then shouted, "Liars! Liars!" Members tried to calm him down. He then shot the pastor. Two deacons were next. Five more people were wounded.

Someone called 911, and the Neosho police came. When they arrived, he had rounded up 20 or so members, threatening to shoot them. The police conversed with him, calming him down. He eventually released the hostages and surrendered.

The congregation that met in the afternoon consisted of Micronesians, most from the State of Pohnpei (Ponapé) in the Federated States of Micronesia (FSM). Most residents of Neosho were not aware that these people were Pacific Islanders, mistaking them for Latinos. They kept most of their internal affairs to themselves, at the same time assimilating into American society. One thing they shared was the Christian faith. Churches were the focal points of their community.

Little is known of the shooter other than he was married and had two children. We do not know of any issues he had before a community carry-in barbecue. We do not know what job he had at the time, whether he had alcohol or drug problems, gambling, etc. We do not know whether he lost a job, lost money on bad investments, or had some other kind of financial difficulty. We do know the he and his family had been at their address for only a year.

We do know that he did hold some grudges. Apparently, he had been in Neosho longer than many others, since he complained about ingratitude for him helping them get a footing in the town while others got the credit. Not long before that Sunday, he felt that he had been shamed. He hadn"t brought food to the barbecue, so others made comments about it. Some suggested that he was stealing food to feed his children.

Then two days before the shooting, on Friday, a 14-year-old girl (a relative, maybe a niece) who helped with housework displeased him by using his car without permission. He punished her with sexual abuse. This seems to indicate poor anger management. She reported this the next day. It also hints at sexual issues. Other than that, there is no available official record of domestic abuse. There is no record of what the congregational leadership knew about the incident with the girl.

Whatever it was, from his statements to police and the court, he thought he was being slandered. That was his motive for interrupting the church service to set them straight. Whether or not he intended to kill anyone when he got there, that"s what he did.

We do not know when, but apparently Micronesians in the Neosho area began worshiping elsewhere. A memorial plaque to the slain pastor and deacons was placed in the church. After the hosting congregation sold the building, the plaque was moved to a Micronesian congregation in a nearby town.

Twelve-and-a-half years later, February 2021, the State Representative from Neosho introduced a bill in the Missouri Legislature to allow concealed carrying of weapons in places of worship. In his remarks, he cited the 2007 shooting at the First Congregational Church.

Apparently, there were undercurrents in the community which were not recognized as a threat to their safety. The response in the FSM indicates that shootings were rare there. It is too easy to think that if someone has a dust-up, that they"ll get over it. That"s not true for everyone. Besides, they were no longer on the Islands, but in Missouri, with the stresses of adaptation coupled with the influences of U.S. news stories and entertainment.

The lesson we learn from this incident is, "Watch for undercurrents."

Be aware of any problems brewing in your church community. Be ready to intervene proactively. Come alongside those who are facing situations which may lead to disruptive behavior. Hopefully we can help a troubled person, even save his soul. This is a New Testament priority, as stated by Paul (Gal. 6:1-2) and James (Jas. 5:19-20).

We might need to refer the person to professional help, maybe even alert the authorities. Doing this, we may also avert the tragedy of a church shooting.

Be aware of undercurrents in the church community which may lead to deadly episodes. Be ready to act proactively to help the person and avert tragedy.