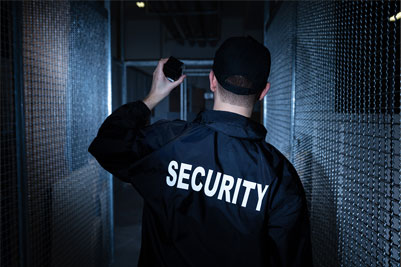 I went out by night by the Valley Gate ... and I inspected the walls of Jerusalem that were broken down and its gates that had been destroyed by fire (Nehemiah 1:13).

Run to and fro through the streets of Jerusalem, look and take note! ... (Jeremiah 5:1).

If you search for "patrol" in your Bible, you might not find it. Very few English translations use that word. However, a few do. Look for it in The Message (an interpretive paraphrase). When you find it, check those passages in your own Bible translation. In the passages above the English Standard Version has "went about" (Song 3:3) and "run to and fro" (Jer. 5:1).

Levites and the Tabernacle

When the Tabernacle was constructed at Mount Sinai, thousands of Levites were assigned to set it up, take it down, move it, and guard it. Though not specifically stated, they were expected to patrol the area around the Tabernacle in camp and on the road. Centuries later, after the Temple was built, Levites were its guards (2 Kings 12:4-12), who not only stood watch, but patrolled the Temple grounds.

Nehemiah and the Walls

As the new Governor of Judah, Nehemiah made a nighttime inspection tour of Jerusalem's walls. Today, guards on patrol check out the condition of the premises on their way around.

In the Song of Solomon, a quote makes a reference to watchmen on patrol. This remark by the king's fiancé reveals that soldiers guarding Jerusalem regularly patrolled the streets. We may find someone who is lost or needs other help while on patrol.

Searching for the Just Man

Jeremiah was ordered by God to patrol Jerusalem's streets, taking note of what he saw, looking for a just and truthful person. When on patrol, we observe other people, noting their facial expressions, body language, and actions..

How much of the church building can you see from just one position? How many safety team members would it take to see the entire place? If you were an intruder and knew where the security people were, where would you try to get in? Where they couldn't see you, of course. Frankly, even many well-placed cameras will not show everything.

The primary advantage of patrolling is that it lets you see the entire perimeter outside, and all the halls, rooms, and corners inside. Another advantage is the benefit of surprise. If the church premises are patrolled regularly, an intruder risks being discovered. A third advantage is that problems with the facilities can be found, reported, and fixed. Finally the act of patrolling keeps the watchers alert.

Patrolling is Situational Awareness in Motion

I assume all of us know that a patrol is not a leisurely walk. Neither is it just exercise, nor is it a race. A patrol is a walk or drive with purpose; it is situational awareness in motion.

Situational awareness is being aware of your surroundings. Note what and who is there and where they are. Over time, note changes, such as situations developing. It is called "Think 540º" in the PowerPoint Presentation for the Sheepdog Church Security Training Bundle "Church Safety and Security Volunteer Academy."[2] 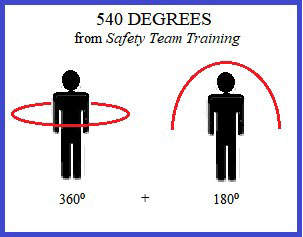 Let's go on patrol and see how situational awareness works there:

John Franklin and Ben Jones are on the pre-services crew for the Eyes & Ears Team at Ballwood Community Church. John says, "It's time to make the rounds."

"Be careful," Ben responds, "You never know what you'll find."

As John steps out the door, he notices that it seems to catch a little before opening. He takes out his pad and jots a line.

Looking around, he notices an SUV and a sedan entering the parking lot. Elder Martin has the sedan, and the worship leader drives the SUV. "Right on time," he thinks. "Those two you can always count on."

Turning left, he follows the concrete walkway to the corner. The flower bed between the walk and the building is neat and clean. The windows are all closed, none cracked or broken. No missing bricks. Wait - there's something by the corner. A sigh: it's just a candy wrapper blown here by the wind. John pockets it to throw away.

The walkway rounds the corner. Twenty feet down is the side door. John tests it. Good! It's locked. His eyes run over the door looking for signs of an attempted break-in. It's OK.

The walkway has ended, and as John walks through the grass, he continues checking the surroundings and the building.

In the back, John notices something that doesn't seem to be right, and takes a closer look. A stake is in the ground next to the building with a broken copper cable attached. Looking up, he sees the rest of the cable hanging down from where eaves meet at a roof valley. Stepping back for a wider view, he sees that it comes from the lightning rod. He pushes the Talk button on the radio.

"Ben. This is John. Outside in the back. Broken ground cable from lightning rod. Do you read? Over."

"Tell that to Brad. It needs to be fixed before then."

That afternoon, Stevenson's Electric makes an emergency visit to replace the lightning rod cable. There is a strong electrical storm that night with many lightning strikes - one hits the church's lightning rod.

What do we learn from this scenario? You never know what you'll find on a patrol. No matter how routine they get, there's always the chance that something needs attention. So be there. Be alert. Be aware. Be ready to respond.

The Church Safety and Security Volunteer Academy has a section on Patrol Procedures. Under it are three subsections: Reporting for Duty, Patrolling Campus, and Responding.

As Safety Team members, we report for duty at the beginning of the shift and check out a two-way radio. When we go on patrol we tell the team. That way, they know where we are. Also, we let them know when our patrol is ended. We may make notes of things that need to be remembered. If it needs immediate attention and is very important, we call on the radio.

When patrolling inside the church building, check all hallways, rooms, corners, and closets. This may seem like a lot at first, but as you do it more times, you become more efficient.

Outside, check the parking lot and the building's exterior. This is usually looking about as you are walking around the building and going by or through the parking lot. You should not be very long out there. Go out several times, but not on a rigid schedule. If someone is looking for an opportunity to do something unnoticed, such as vandalism or theft from vehicles, deter it by keeping them uncertain of when you'll show up. If you double back, you may surprise an intruder who was waiting for you to pass by.

When you are outside, there are several other things to consider:

You have your radio. If a safety or security issue is called out over the radio and you are aware of it, respond to it. Definitely respond if you are specifically called. This includes calling 911. Assist first responders. If you are outside, you may have to take them inside and show them where to go.

When you start the shift, check the Patrol Log. Check it again before going on your first patrol. There may be something to watch for. If there was anything worth noting related to safety and security, anyone or anything you observed that seemed unusual or out of the ordinary,

enter it into the patrol log. It may be something that does not call for an Incident Report, but you or the other team members might need to know it later on.

When there are new Safety Team members, part of their orientation should be taking them on a few patrols both inside and outside. Point out specific areas to watch. Ask them what they see as you go.

For thousands of years, those responsible for security and safety have been patrolling - moving around, alert for signs of danger, and purposefully inspecting defenses and seeking evidence. Even with modern means of surveillance, patrolling is just as important today as it was then.

This series on the Church Safety and Security Volunteer Academy has six articles. The others are "Orientation" (Starting Right), "Setting It Straight" (Policies and Procedures), "Communication" (Radio Use and Reporting), "Curricula" (More Courses, Refreshers), and "Access Control" (A Key to Security).