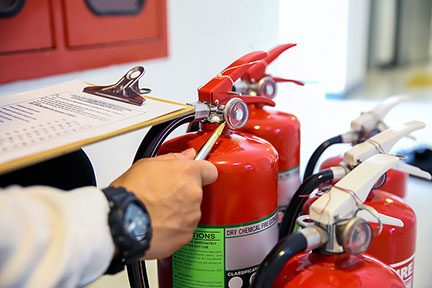 An article based on the Sheepdog Church Security training course Arson and Fire Safety.[1]

A number of causes of fire are mentioned in the Bible. Knowing the cause is the key to knowing how to prevent a fire.

Can a man carry fire next to his chest and his clothes not be burned? (Proverbs 6:27)

Like a madman who throws firebrands, arrows, and death (Proverbs 26:18).

And he burned the house of the Lord and the king's house and all the houses of Jerusalem; every great house he burned down (2 Kings 25:9).

Rockford, Illinois, September 3, 2020 - Arson is suspected in the burning of a church building built in 1865. It was a total loss. Though it was unoccupied at the time, a Hispanic congregation held title to the building.[2] At this time, the identities of suspects and their motives are undisclosed.

New York City, New York, May 1, 2016 - The fire that gutted the Serbian Orthodox Cathedral in NYC was caused by candles reigniting. They were not properly extinguished or disposed of after the Orthodox Easter service.[3]

Boston, Massachusetts, August 21, 2013 - A short in a light fixture caused a fire that heavily damaged a church.[5]

Queens, New York City, New York, September 24, 1996 - A gas leak in the basement of a church led to an explosion which destroyed the church and two neighboring homes.[7]

October is National Fire Prevention Month in the United States and Canada (the Great Chicago Fire was October 8-10, 1871).[8][9] Emphasis is given to preventing fires, preventing the spread of those that do start, and evacuating burning buildings. Although this deserves year-round attention, early Fall is a good time for fire-proofing heating systems before the cold settles in for a season.

In colonial Philadelphia, Benjamin Franklin, who founded the first volunteer fire department, gave this advice: ";An ounce of prevention is worth a pound of cure."; He meant that preventing a fire is better than fighting one.

At that time, people took coals from a fireplace and put them in bed warmers. Many fires started from live coals that spilled from open vessels they were carried in and lodged in cracks in the stairs where they could not be extinguished immediately. He advised them to carry the coals in closed containers. We do not heat our bedrooms the same way today, but there are similar fire hazards common to our society, such as electric or kerosene space heaters.

The causes of fire in the news stories are arson, candles, an electrical overload, a short circuit, a faulty heating system, and a gas leak. We can add other causes of church fires, such as lightning, worn electric cords, smoking, overheated fryers, food left on stoves, spontaneous combustion of oily rags, overheated engines and electric motor, children playing with matches or lighters, even mobile phones catching fire.

Three things are needed to start and sustain a fire: Fuel, Oxygen, and Heat. A fire can be prevented by keeping the three elements apart. Oxygen is the hardest element to keep out, so we usually focus on the other two. The surest way to prevent a fire is to keep the fuel away from heat. On the other side, the surest way to start a fire is by adding or creating heat or putting fuel next to a heat source.

An early method of making a fire, still used today, is by friction - rubbing two sticks together or putting the point of a stick on a combustible surface and spinning it with a bow. You get a similar effect using a dull bit on a high-speed drill (smell the smoke). We can prevent fire by inspecting and maintaining machinery, such as fans. When the fan spindle is dry (no lubrication), the fan can overheat with friction, or the motor can overheat, and start a fire.

In general, the best way to prevent a fire is to keep combustible materials away from sources of heat. Keep paper, cloth, wood, plastics, and flammable liquids away from radiators, stoves, and fireplaces.

In the kitchen, don';t leave food and pans with grease untended on burners that are on. See that all range burners, ovens, and deep fryers are off when the kitchen is not in use. Don';t leave combustible materials on burners. If the stove is off, someone may turn it on with the material still on the burner. If the power is off, the switch for an electric plate may be on, and the plate will heat up when the power comes back on (an apartment fire was started this way).

Take care with open flame devices. These include candles, oil lamps, kerosene heaters, fire pits, incense burners, torches, canned-heat pan warmers, etc. Do not let children use these items without supervision. Be sure all flames are extinguished when their use is finished. The cathedral fire in New York City was started by an unextinguished candle.[2]

A common source of cause of fire is electricity:

Inspect the heating system annually before winter for safety. With some systems, this includes the ducts and all attached pipes.[5] If space heaters must be used, keep them the recommended distance (2-5 feet) away from combustible materials. Use combustion space heaters and generators only in well-ventilated areas (such as close to an open door) to avoid carbon monoxide poisoning.

Volatile combustible liquids, such as gas, alcohol, and turpentine, are a special concern. Keep these in closed containers and away from open flame, red-hot heating elements, or anything creating electric sparks. Fumes from these liquids mix with air and can explosively ignite on contact with a heat source.

Store highly flammable items, such as candles and incense, in air-tight, fire-proof containers away from heat sources.

Be alert to any gas leaks.[6] If your church uses natural gas, check the kitchen, furnace room, water heater, and meter room frequently. Sniff for the smell of gas or use a gas detector. Know how to shut off the gas if a leak is detected or suspected.

Even if your church is a non-smoking facility, have cigarette disposal containers outside where smokers are likely to go. This can be as simple as a #10 can almost filled with sand or a commercially-made cigarette butt receptacle. Keep the areas just outside the church free of combustible materials which can be ignited by a cigarette butt, such as leaves, loose paper, wood shavings, etc. Also, don';t use bark mulch next to the building - it';s combustible.

Don';t leave matches or lighters around where children can find them. Many fires are started by kids playing with them.

Do not use a furnace room for storage.

You can find checklists for church fire safety online. Most of these are posted by insurance companies.

The other article in this series on Church Fire Safety is ";Put Out or Get Out"; (Extinguishing, Evacuation, and Fire Drills).