It Ain't Over 'til It's Over 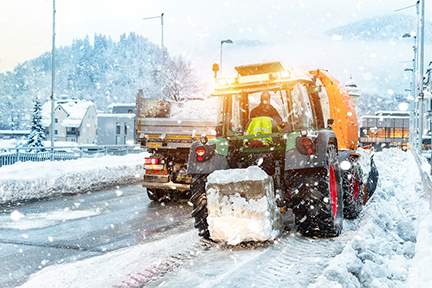 Prepared for Winter - She is not afraid of snow for her household, for all her household are clothed in scarlet (Proverbs 31:21).

Prepared for Winter - She is not afraid of snow for her household, for all her household are clothed in scarlet (Proverbs 31:21).

A Winter Hazard - ... as the streams that overflow when darkened by thawing ice and swollen with melting snow (Job 6:15b -16 NIV).

Central America, Gulf of Mexico, Eastern US and Canada, March 11-15, 1993 - The Superstorm of 1993: A low-pressure trough crossing Central America from the Pacific Ocean to the Gulf of Mexico developed into a low-pressure center which became a cyclone. It crossed West Florida, killing several persons in the storm surge, and rapidly moved north. On March 13, from the southern Appalachians to Ontario and Quebec it dumped record snowfalls, bringing an area with 40% of the population of the United States to a halt. Along Interstate Highways I-70, I-80, & I-90, the system stretched from Illinois to the Atlantic Ocean. Roofs collapsed in many places.[2]

Ohio Valley and northward, March 2020 - The long-range forecast in The Old Farmer's Almanac predicts wintery temperatures with snow and ice from the Ohio Valley northward.[3]

North Central States to Northeast, March 1, 2019 - True to the old expression, March "came in like a lion" with an Arctic blast spreading very low temperatures from the Upper Plains to the Atlantic Coast.[4]

Northern States, March 2017 - A bomb cyclone from the Northwest crossed the northern states with high winds and light snow. In the east it merged with a Nor'easter on March 11, becoming a monster storm creating white-outs and leaving wind damage. It is commonly known as the Blizzard of 2017. [5]

Our article series for March focuses on preparing for and responding to severe weather and natural and human-caused disasters. The topic of this article is Winter Weather. Winter occupies three quarters of the month of March, with Spring not coming until the 21st. In this article we discuss:

The types of winter weather you experience depend in large part on where you are. In northern states, people commonly known as snowbirds move south during the Winter. For example, many residents of Washington, Oregon, and Idaho go to Phoenix, San Diego, or Pasadena, several residents of the Dakotas and Nebraska move to Houston or San Antonio, and numerous folks from Wisconsin to Ohio to Maine spend the winter in Florida. Even then, northern winter weather can stretch south, visiting Phoenix, the Gulf Coast, and Florida.

The hallmark of Winter is cooler, colder temperatures. There may be warm spells, but cold returns, reminding us that it is still Winter. Weather events include extreme cold, snow & ice, and freezing rain. Weather systems bring continental winter storms and Nor'easters. Strong winds when snow is on the ground produce blizzards. Rapid melting of heavy snow packs generates flooding. Across the South, Winter brings rain - in Phoenix, this is the time for flowers to bloom.

There are specific hazards that come with the cold, the ice, and the snow. Cold brings the risk of hypothermia, and freezing temperatures threaten those outside with frostbite. The cold also makes demands on heating systems, including those of churches.

While snow can be beautiful, it also has its hazards. The weight of snow on roofs can cause them to break and collapse. Snowfall from the 1993 Superstorm collapsed roofs in the South which were not designed for heavy snow.[2] Not only roofs, but tree limbs and utility lines can be brought down with the weight of accumulating snow or ice. Avalanches are a hazard in mountainous areas, endangering those engaged in recreational activities. Some churches are in avalanche risk areas.

Trees, tree limbs, and utility lines can also be brought down by the powerful winds of winter storms. The resulting power outages themselves are a winter hazard, which can be life-threatening when they bring life-sustaining systems to a halt. These include heating systems, well pumps, and medical devices.

This leads to other risks from trying to keep warm. Heating devices have started fires. A common hazard of combustion in enclosed spaces is carbon dioxide.

There are many personal risks of winter weather. Every Winter, a number of people experience heart attacks while shoveling snow or engaging in other strenuous activities. More common are slips and falls on slick walking surfaces and vehicular accidents on slick roads. Each year these account for many injuries and deaths.

Preparing for Winter - for any kind of weather, that is - is both what we do and what we get. We know it is already Winter. You may have fared well so far, realizing you could have done better, or you may wish you had been prepared. When it comes to equipment and supplies, you can get what you don't have now. There are things to do which may have to wait until the season changes.

Severe weather includes conditions which necessitate postponing or cancelling services, classes, or events. Your church may already have OneCall or another service. If you don't, or if you are considering changing services, Alert.Church[7] is geared specifically for churches and other places of worship. It is easy for members to sign up to receive alerts. Messages can be sent to specific groups, such as the pastoral team, teachers, ministry leaders, Safety Team members, those scheduled for a specific event, the entire congregation, etc. It sure beats Rollodexing - looking up and calling people one-by-one, especially if you have more than a dozen or two.

If you live in an area which normally has heavy snow, you probably already know if your church roof can take it. This summer you can have it inspected to see whether it is ready for another Winter. However, if you are in an area where heavy snow is rare, could your church's roof hold up if it came? Many roofs down South collapsed under heavy snow in the 1993 Superstorm.[2] It wouldn't hurt to find out what your church roof can take and what can be done to make it snow-ready. Remember that when Winter weather pays the South a visit, it can mean more than closed roads and power outages.

Take note of problems with doors and windows and any leaks in walls and ceilings. Have them fixed to prevent water damage and clean up any leaks which have already happened. Having doors in good working order is important for safe evacuations.

Trees and power lines are not only at risk during a strong winter storm, heavy snow, or an ice storm, but they also pose hazards to nearby buildings, vehicles, and people. Have trees around the church trimmed to lessen the risk of storm damage and/or injuries. Trees that are dying, hollow, or have compromised root systems should be removed.

This may or may not be an option in your location, but it would be beneficial to route power lines so that they will not block the way between the church and the road if downed. Even better, have them go underground. That way people can get out and emergency vehicles can come in when the lines are down.

Protect your water lines from freezing. If one of them freezes and breaks, the thaw can be worse than the freeze.

The free download lists supplies to get and ways to prepare the church building for severe weather and disasters. Many of the supplies are for temporary disruptions and for sheltering in place. Also covered is being ready to use the church itself as a community shelter.[6] Besides those in the download, there are items specific to Winter, addressing different hazards.

A generator can serve in any situation when the power is out. It can power heat tape to keep water lines from freezing. It can also power heaters for water for cleaning wounds and warming persons with hypothermia or frostbite.

Portable devices for heating foods and liquids are needed if the power is out or gas is cut off and there are persons to care for, whether stranded, ill, or injured.

Salt and/or sand are needed for treating driveways, parking lots, and outdoor walking surfaces. You need shovels and/or snow blowers to clear them of snow. If you have not contracted someone to plow and sand the parking lot, you need the equipment for someone in the congregation to do it.

Inside, the church needs mops and buckets to clean up melted snow. Also helpful are web mats in the entryways to trap snow and water from boots and shoes as people come in.

The church also needs means of getting excess snow to safely slide off the roof. This can be a roof-heating system to melt the bottom surface of the snow. It could be tools to push or pull snow on the roof, taking enough off to lessen its weight on the roof.

While Winter lasts, we remain ready for the cold, snow, ice, and strong winds. Some parts of the country face rain, flooding, and tornadoes, with their own threats to the safety of the flock. It may be March, but it is still Winter. As Yogi Berra said, "It ain't over 'til it's over."

This series on Severe Weather and Disasters has five articles. The other four are "Twisting in the Wind" (Tornadoes, Thunderstorms, and Lightning), "A Burning Problem" (Wildfires, Drought, Extreme Heat), "Human Error" (Disasters Caused by People), and "Tectonic Terror" (Earthquakes and Volcanic Activity)