The Cries of Children Being Abused 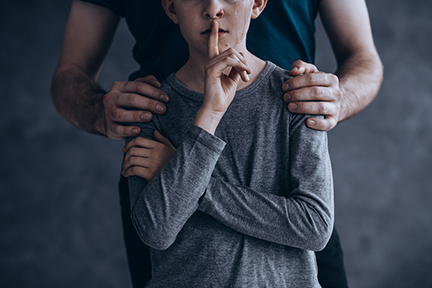 Based on the Sheepdog Church Security Training Course “Protecting Children from Sexual Abuse in the Church.”[1]

"A voice was heard in Ramah, weeping and loud lamentation, Rachel weeping for her children; she refused to be comforted, because they are no more" (Matthew 2:18).

Can you hear the cries of children being abused? They are there, and the sound is now coming through as the muffling of their cries is being lifted. Like a rising crescendo come news accounts of child abuse, both physical and sexual, in churches and in their institutions and social services. In large part, this is exposing what has been going on for centuries. On the other hand, in a society which now accepts promiscuity and scoffs at abstinence, more people have grown up without setting personal boundaries. This is not just in one or a few denominations, but has been reported among many religious traditions, as a sample of news stories shows.[2][3][4][5][6]

The good news is that churches are hearing the cries. Several denominations and denominational ministries have been taking steps to protect those children who are in their care. Just a sample of them includes Baptists, Presbyterians, Methodists, Adventists, Mormons, and Mennonites.[7][8][9][10][11]12]

This month's series deals with how we prevent and deal with child abuse. In this article we consider these four questions:

Right now, you should know about our free Child Protection download. Click this link to get it.[13]

What Is Child Abuse?

"To abuse" means to mistreat or take improper or unfair advantage of a person. An animal or an inanimate object can also be abused, but this is not on the same level as abusing persons made in the image of God. God told Noah, "Whoever sheds the blood of man, by man shall his blood be shed, for God made man in his own image" (Genesis 9:6). Jesus applied this to child abuse when he said, "Whoever causes one of these little ones who believe in me to sin, it would be better for him if a great millstone were hung around his neck and he were thrown into the sea" (Mark 9:42).

By extension, abuse has also come to mean misusing authority, laws, and regulations. In the context of this series, it applies to those who abuse their positions of trust and authority to abuse children.

"Any recent act or failure to act on the part of a parent or caretaker which results in death, serious physical or emotional harm, sexual abuse or exploitation"; or

"An act or failure to act which presents an imminent risk of serious harm."[13]

There are five basic kinds of child abuse: physical, mental, emotional, sexual, and neglect. We can add relational abuse to the mix, but these five can be considered as instances of relational abuse. These are not mutually exclusive. Cases of child abuse often consist of two or more kinds of abuse, such as sexual and physical. Not only that, but sexual abuse becomes emotional and mental abuse. Mental and emotional abuse are also used to groom the child for sexual abuse and for its cover-up.

Who Are the Abusers?

According to Federal law, they are parents or caretakers. To these we can add older children, older relatives and acquaintances, and strangers. For a long time, parents and teachers have been warning children about strangers trying to lure them away. This does happen, but most perpetrators of child abuse are persons the child knows. Often, this is someone who has authority over or responsibility for the child. Examples of these are parents, teachers, scout leaders, even pastors and youth leaders.

Why Does Child Abuse Happen in Churches?

There are a number of reasons why child abuse happens in churches - not just in the buildings, but in the churches' programs and activities, to participants in church activities, and by pastors, staff, and volunteers of the churches.

First, the church is made of fallible human beings, born with the sin nature. Some who have been "converted" or "saved" have never overcome sinful impulses. Hebrews 12:1b says, "Let us also lay aside every weight, and sin which clings so closely." Many have not set boundaries on themselves - Paul wrote, "But I discipline my body and keep it under control, lest after preaching to others I myself should be disqualified" (1 Corinthians 9:27). Some have relapsed into patterns from years before.

Then there are also wolves masquerading as sheep. Many sexual predators look for ways to be in contact with their preferred prey. Then there are others who may not actively seek children to abuse, but if placed in close contact yield to temptation. The first will volunteer to be a teacher, activity leader, etc. The second might be asked to help because of the need, and cannot bring themselves to say, "No. I have a problem."

There is a kind of naïveté among church members. "No one here is like that," they may say, or, "It can't happen here." We also hear, "He's such a nice young man," or, "He'd never do anything like that."

For whatever reason, many churches are reluctant to screen applicants for working with children. They may think it is unnecessary, or think it shows a lack of trust. Someone may say, "No one will volunteer if they have to go through that." When I applied to be a substitute teacher in two school districts, each one had me fingerprinted for background checks. I had no fear of that, because my record was clean.

Many churches say they can't afford to run a background check and additional screening. There is a service made for them, Protect My Ministry[14]. Sheepdog Church Security has partnered with them to help churches find an affordable and effective way to screen applicants for church positions, including working with children.

What Is the Impact of Child Abuse?

The victim, the family, and the church are negatively impacted by child abuse. So is the abuser, especially if it is someone put into a situation they cannot handle.

Many who were abused as children or youth are emotionally scarred for life, especially if it was sexual abuse. They may blame themselves and live with a sense of shame. It can lead them to promiscuous behavior. They may have trouble establishing a trusting and intimate relationship in marriage. Some become suicidal. It is common for an abuse victim to be distrustful of persons identified as in the same category as the offender, whether a teacher, a coach, a youth leader, a pastor. A victim may be traumatized by anything that reminds them of the abuser, such as a type of clothing, a certain color, etc. Children who were excelling in school may suddenly have trouble studying. They may resent and resist authority. Many criminals and child abusers were themselves abused as children. There's more.

When a child is abused, it affects the family. The victim may become depressed, or uncooperative, or unruly. If the abuser is in the family, the abuse strains relationships, especially if it is a parent. Child abuse may lead to divorce. If both parents are involved and the authorities come in, it can break up the family and put the victim in foster care, which may result in more abuse. Even if the abuser is not a relative, the family may be shamed by those who quickly blame the family.

The church is affected by child abuse. The church's reputation and effective witness among its members and attendees as well as in the community can be damaged by abuse. This is especially true if there has been a cover-up or if church leadership did not deal with it. Then there is civil and criminal liability. The church needs policies and procedures to prevent abuse and to deal with in case it does happen.

Many times a child attending Sunday School, a Bible club, or other church programs is being abused at home, in school, or somewhere else. If a teacher, activity leader, or childcare worker/volunteer becomes aware of the abuse or reasonably suspects it, there is a moral duty to report it. Most states have reporting requirements for child abuse. So here the church becomes involved.

The community is also negatively affected by child abuse in the church. The child, the family, and the church are members of the community.

The abuser is also negatively affected by the abuse, even if he or she is not caught. The longer it continues, the more it is ingrained in the offender, and the harder it is for that person to control the impulses. For almost all abusers, it takes interdiction and intervention to break the cycle. Getting caught can be a relief for some and can motivate them to change. However, they still need intervention.

Child abuse is real. It does happen, even in the church or to those the church ministers to. Listen to the cries of children being abused. Find out how to help them in your church.

Other articles in this series are "On the Front End" (Preventing Child Abuse in the Church), "Riding Shotgun" (Guarding against Child Abuse), and "What Now?" (Dealing with and Follow-up to Child Abuse).