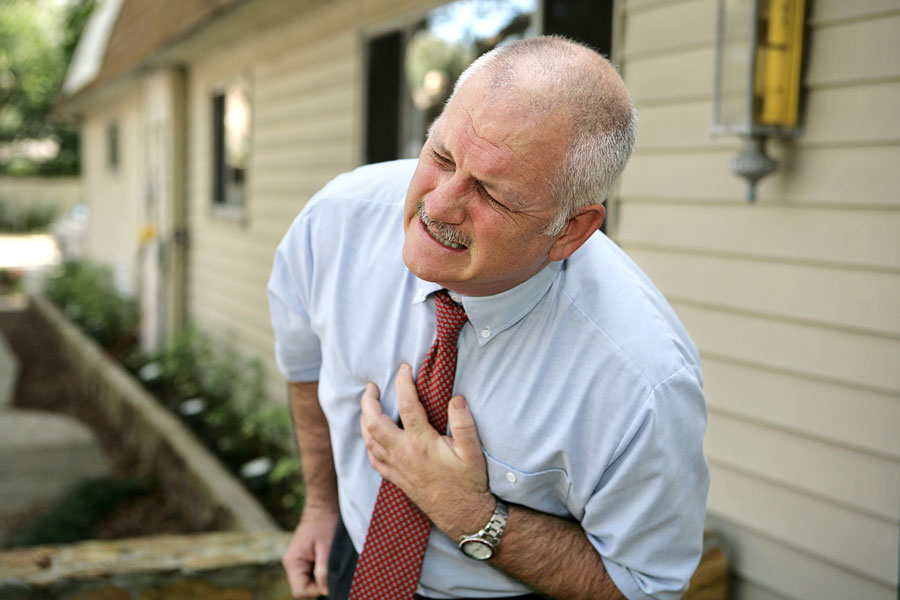 An article in The Healthy Church - the May 2020 series.

Then in the morning, when Nabal was sober, his wife told him all these things, and his heart failed him and he became like a stone (1 Samuel 25:37).

As soon as he mentioned the ark of God, Eli fell over backward from his seat by the side of the gate … and his neck was broken and he died, for the man was old and heavy (1 Samuel 4:18).

So his fame spread throughout all Syria, and they brought him all the sick, those afflicted with various diseases and pains, those oppressed by demons, those having seizures, and paralytics, and he healed them (Matthew 4:24).

Wrentham, Massachusetts, November 24, 2019 - A 75-year-old parishioner had a heart attack during a Sunday morning service. A nurse sitting behind him immediately began CPR. Other nurses in attendance assisted. When a police officer arrived he took over and was relieved by medics when they came. The man, taken to a hospital, survived.[1]

Ashland, Kentucky, August 12, 2018 - The pastor of a church collapsed from a heart attack while preaching and was clinically dead. However, an Automated External Defibrillator recently installed by the church was used to revive him.[2][3]

Chattanooga, Tennessee, November 19, 2017 - A woman on the platform giving her testimony in a service suffered a cerebral hemorrhage. She was caught by a woman standing next to her when she dropped the microphone. She was taken to the hospital where emergency brain surgery was performed. She survived this and a subsequent surgery. Quick medical treatment saved her life.[4]

Sydney, Australia, August 18, 2019 - Not long after the Sunday morning worship service had ended, one of the worship leaders suffered a brain aneurysm. She was hospitalized and received a 9-hour surgery. She left the hospital near the end of September and is now fully recovered.[5]

Near Athens, Georgia, December 2018 - A person arriving at a church for a Christmas program met a friend leaving the previous performance. This friend advised him to put on his sunglasses. Why? This person has epilepsy, and the flashing lights might trigger a seizure unless filtered out. An article he wrote tells how several stimuli in contemporary worship services can trigger epileptic seizures and make epileptics feel unwelcome.[6]

There are several sayings which begin with, "You can't stop the rain, but …" What follows is a reasonable way of preparing for and responding to the rain. The same thing may be said for medical emergencies, such as heart attacks, strokes, and seizures. We could also include choking. These things happen, and we need to be ready to respond.

In 1 Samuel 25:37, Nabal apparently had a heart attack. The preceding verse says he had been feasting and was very drunk. If this was a habitual pattern, it could have led to hardened arteries and a thrombosis.

Heart attacks are very common in our society. They used to be almost always fatal, but now many heart attack sufferers survive and go on to live normal lives (often a reformed normal with better lifestyle habits and perhaps a pacemaker).

When someone attending church has a heart attack, those who are there can make the difference by being the first responders. An untrained person may be able to initiate chest compressions going by what they have seen and read. Even better is when someone there has been trained in cardiopulmonary resuscitation (CPR).

In some cases, an automated external defibrillator (AED) is needed to stop and restart a heart beating too rapidly to efficiently deliver blood. It would be an advantage for your church to have one and to have people trained in its use.

It is important to know the signs of a heart attack. It can begin with the person feeling faint or feeling pain in the chest, shoulder, or arm. If he or she collapses, but is still breathing, it is most likely a heart attack - they may also stop breathing. The first goal of CPR is to force pump the heart to get blood to the brain and other vital organs. That is why the chest compressions are directly over the heart.

The second goal is to keep them breathing or start them breathing. If the compressions do not get them breathing again, you need to use your CPR mask and force air into their windpipe mouth-to-mouth (through the mask, of course).

The cause of Eli losing his balance and falling (1 Sam. 4:18) could have been either a stroke or a heart attack. Neither is surprising for his age and physical condition. Strokes are really more common than most people think.

In 2 Kings 4:18-37, the Shunnamite's son died of some kind of stroke. This was most likely heat stroke (vv. 19-20), but ischemic strokes and aneurysms are not unheard-of in young men. Some are caused by inherited conditions, but blood clots can follow severe bruising.

Many times a person experiences a ministroke - technically a transient ischemic attack (TIA). This is a temporary interruption of blood flow, and it often goes unnoticed. Many people have had several TIAs without knowing it. However, TIAs often precede a full stroke.

It is important to know when someone is experiencing a stroke. Some of the signs may be slurred speech, one side of the face partially paralyzed, numbness on one side of the body, or trouble moving one arm or leg or one arm or foot. There is little we can do to the person, but it is urgent to get medical help right away. Meanwhile, make them comfortable. There are drugs to stop the damage of a stroke. EMTs and paramedics may have them. They can also get the patient to a hospital quickly. Quick administration of the drug is extremely important for recovery from a stroke.

Epilepsy has been around for a long time. It is caused by brain damage, which can happen any time in life from birth to old age.

How should we respond to an epileptic seizure?There are a few things to do and some to not do. Our goal is to keep them from harm. Two key resources are from the Centers for Disease Control and Prevention[7] and from WebMD[8].

The first thing to do, if it is a Grand Mall seizure (they lose consciousness), is to let the person down easy to lie on the floor and turn them onto their side to help them breathe. Remove anything hard or sharp so they don't get hurt. Loosen ties, necklaces, and collars. Remove their eyeglasses. Keep track of the time - if it lasts more than five minutes, call 911.

Then (for all seizures) stay with them until it is over. Comfort them, be calm, check for medical tag or bracelets, and make sure they can get home safely (get someone to take them, even a taxi).

There are a few don'ts:

About Partial Seizures: There are partial seizures of which nearby people may be unaware. Certain stimuli can trigger reactions such as headaches, nausea, blurred vision, light dizziness, etc. Some of these stimuli are -

Some churches are scheduling services without these stimuli to accommodate members and guests with epilepsy by trying to avoid triggering episodes at any level from partial seizures to grand mall.

Choking may be described as accidental, but some persons have conditions affecting their swallowing, predisposing them to choking.

What is choking? An object gets into the windpipe (trachea) and blocks the passage of air - meaning the person cannot breathe. This object can be anything. Most often it is a piece of food. It can be chewing gum. People have choked on dentures when a part of the denture got into the windpipe. I once choked on a foil leaf from a decorated cake. You can choke on liquids, but that usually does not stop all breathing.

Some objects can be reached and pulled out, such as a denture or the foil leaf. However, a smaller object can be too far down to reach and pull out. It needs to be dislodged and expelled. This is why Dr. Heimlich devised the method named after him. This is reaching around the person from behind, putting a fist covered by the other hand just below the breastbone, and jerking it in. This forces the diaphragm up into the lung, pushing air suddenly up into the trachea. This should dislodge the choking item. Repeat if needed.

Training is needed for responding to heart attacks and stopped breathing episodes. The two preferred sources of CPR and AED training and certification are the American Red Cross[9] and the American Heart Association[10]. Try to make this training available not only to Church Safety Team members, but also to teachers and group leaders. The Red Cross also offers First Aid training.

If someone at your church has a heart attack, a stroke, or a seizure, or is choking, would you know what to do and how to do it? Find out what to do and get the needed training and certification.

This series on The Healthy Church has four articles. The other three are; "Proactive Response" (Make the Church a Safe and Healthful Place), "Help the Hurting" (Responding to Injuries), and "Make Yourself Ready" (Equip and Train for Medical Response).