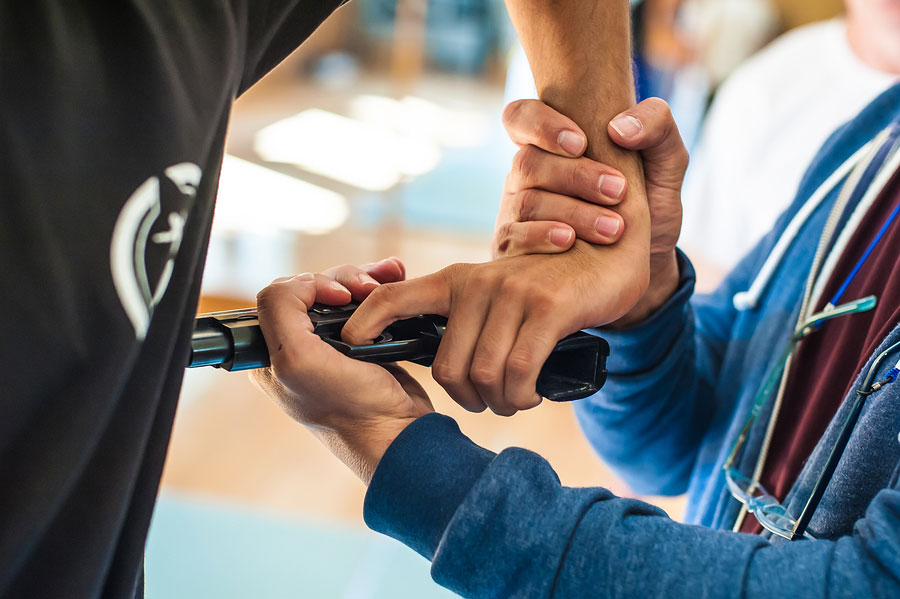 Then his father and his mother shall take hold of him and bring him out to the elders of his city at the gate of the place where he lives (Deuteronomy 21:19).

“Behold, the Lord will hurl you away violently, O you strong man. He will seize firm hold on you … (Isaiah 22:17).

Austin, Texas, December 5, 2019 - A man broke into a house and began grabbing things. He was confronted by the man and woman who lived there and got into a fight. The woman placed him into an arm bar hold and held him until the police arrived.[1]

Bend, Oregon, August 16, 2018 - The Police Chief of Bend saw a disorderly man yelling, gesturing wildly, and throwing a beverage container which hit a passing vehicle. He tried to calm the man down, but the man turned on the chief with insults. He picked up the coffee cup he had thrown at the vehicle, threw it at the chief, then physically assaulted him. The chief forced him down with an escort hold, then radioed for assistance.[2][3]

Holding on for Control

The purpose of holds is to control the subject through either immobilizing limbs, pain-induced compliance, or both. The most commonly holds in self-defense are wristlocks[5], escort holds[6], and arm bar holds[7]. Leglocks[8] are a possibility, but advisable only if you end up on the floor.

On the practical side, though, our first reaction to a violent move will most likely be to block [parry] a blow, then move on to a hold if that does not stop the attack. If the other person is simply having an angry outburst, the attempted hit may relieve their tension (akin to pounding on a table) with no need to restrain them.

In order to parry a blow, you must first be ready to respond. In the recommended Interview Stance,[9] the feet are shoulder-width apart at a slight angle away from the subject. The weak side is closer to the subject, and the strong foot is back a little. This gives you more room and time to respond to a move by the subject, and your arm is better when moving across you than out to the side. If you are the same-handed as the subject, it gives you the advantage of position.

The hands are held in a relaxed-yet-ready position just above the waist. You may cup the hands lightly, but don't clasp them. That way you can quickly move them independently.

If a blow comes at chest-to-shoulder height, bring the arm on that side up and out, deflecting the blow out from the inside. Your other hand is ready for a move from the subject's other hand. If the fist swings up from below, parry down and out. With your hands in the middle, you can go either direction.

If the subject starts with a kick, he is committed to a trajectory. You can move out of the way and may be able to grab the foot, pulling him off balance.

A wristlock is the most common hold. It often leads into an escort hold or an armlock.[10] The armlock can become a shoulder lock or an arm bar. The wristlock becomes a hold in itself by rotating or hyperextending the wrist. This immobilizes the hand and allows the defender to control the arm. Done to an extreme, it can tear ligaments and dislocate the wrist, so care is needed to prevent needless injury.

The escort hold, called a "come along" by the Marines,[11] enables you to take the subject to where you want him to go, such as the door, a corner, or a room. In it the defender holds the wrist with one hand and the upper arm with the other, pushing the subject along from behind that shoulder.

In an arm bar hold, the arm is held bent at the elbow behind the subject's back with the hand forced up. This can be a pain-compliance hold by forcing the arm further up - a procedure commonly called "twisting his arm behind his back." It can be used as an escort hold. Like the wristlock, this can result in injury if carried far enough.

Leglocks are on-the-ground holds. In self-defense you do not go to the ground just to do a leglock, but if you are on the ground, this is a way to keep the attacker from controlling you. Depending on the type of leglock used, hip and knee injuries can result. This is especially true for the footlock which can dislocate a leg bone at the ankle.

Parries, holds, and locks are not likely to cause death unless they make a subject's head hit a hard surface or cause him to fall off a height or into dangerous machinery or traffic. However, there is the potential of injuries to ligaments, muscles, and joints. There is also danger to yourself if a hold is not properly executed and a further-enraged attacker gets the upper hand.

By avoiding injury, we avoid charges (civil or criminal) of using excessive force. To avoid needless injury to ourselves or the subject, we need to be properly trained in using holds. This includes practice, not only in training, but periodically after that. You and other team members can practice using holds in a safe place (a practice room or gym with mats).

In self-defense, holds and locks are a means of gaining and keeping control of an attacker. They must be executed properly to be effective and safe.

This article is one of a series on Weaponless Self-Defense. The other articles in this series are "Care to Be Aware" (Situational Awareness), "Arms or Arms" (The Continuum of Force), "Down We Go" (Knockdowns, Tackles, Throws), and "Find a Coach" (Self-Defense Training).