The Background of Reflex Protect 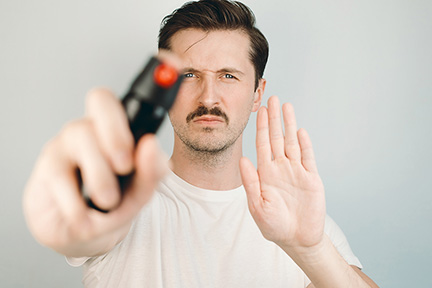 What if someone in the church becomes violent? They may have entered intending violence, or it could have developed from a situation. Maybe verbal de-escalation wasn’t enough. Now what can you do to end the violence and protect lives without endangering others nearby? One person escaped by chance being a victim in a mass shooting. Asking, “What can I do?” has resulted in a non-violent defensive product.

And the Lord's servant must not be quarrelsome but kind to everyone ... correcting his opponents with gentleness (2 Timothy 2:24-25).

When a man's ways please the Lord, he makes even his enemies to be at peace with him (Proverbs 16:7).

A Day of Horror

July 1, 1993, a typical summer day in San Francisco, was the Thursday before the Independence Day weekend. This year, for the families, associates, and friends of nine persons, instead of celebration, this holiday would be a season of mourning. For those of another six persons, this began a time of care, healing, and recovery. A man with failed and failing businesses opened fire in the Pettit & Martin (P&M) law office suite at 101 California Street, shooting fourteen persons then himself. Eight of the victims plus the gunman died that day. One victim died a year-and-a-half later from his wounds, bringing the death toll to nine plus one.

The killer stepped from the elevator in the center of the 34th floor. He took off his suit coat, inserted ear plugs, took three handguns out of his valise, and went down the corridor to the conference room, where a deposition was being taken. In a hail of bullets, he killed two and wounded three. The fatalities included the person giving the deposition (Jody Jones Sposato) and her lawyer (Jack Berman). Wounded were another P&M lawyer (Charles Ross), a local court reporter (Deanna Eaves), and a lawyer for the firm representing another party in the deposition (Sharon Jones O'Roke). He then shot two men in an office adjoining the conference room. Allen J. Burke died that day, Brian F. Berger died eighteen months later from complications.

John Scully, a P&M lawyer who was in another office, rushed to the stairs and down to the next floor where his wife Michelle, also an attorney, was in the P&M law library. He told her of the shootings and they rushed into the hall to head down the stairs. While in the hall, the killer stepped out of the stairwell. John backed Michelle into a corner and shielded her with his body. The shooter killed John but only wounded Michelle. As he was dying he told her, "I love you." On that floor another lawyer (David Sutcliffe) was also killed.

The gunman descended the stairs to the 32nd floor where he killed two employees of an investment management firm - the Trust Company of the West - (Shirley Mooser and Donald "Mike" Merrill), wounded a third (Victoria Smith), and killed a visiting legal secretary (Deborah Fogel). Back in the stairwell, the murderer saw police coming up and committed suicide.[1][2][3]

Joe Anderson, a P&M lawyer, was across the street on business. It was there he found out that several of his colleagues were dead or wounded along with others. He's certain that if he had been in his office, next to Burke and Berger's, he would have been killed. There was no way he could have neutralized the shooter and no place to hide fast enough.[3]

Two years later, the law firm dissolved[1] and Anderson moved on. All the while, the question of how to protect one's self against violence stayed in his mind. Increasingly, concealed carry weapons (CCW) were being promoted as a deterrent and a defense against sudden attacks. However, firearms, including CCW, were not allowed in many places, either by law or by the preference of business and institutions. Also, not all attacks are deadly, thereby ruling out the use of deadly force as a response in those situations. Topping this off, the most promoted non-lethal weapon, pepper spray, was increasingly regulated because of adverse effects on some people. There had to be a way![4]

Meanwhile, mass killings became more frequent in businesses, schools and churches, as well as in public places, and violent outbursts continued to be a problem in mental health care institutions. This increased the urgency of an answer to the question.

Joe Anderson came into contact with Steve Mangold and his new delivery device for defensive spray. Named Reflex Protect, the spray head was designed to shoot a narrow stream of defensive contact irritant a long distance.

The content was also a new product. Called Presidia Gel, based on the active ingredient of tear gas. However, instead of inflicting its discomfort on everyone nearby, the gel form could be fired in a pinpoint stream, narrowing the target area to one individual, even in a crowd. Problems with oleoresin capsicum (OC) - also known as "pepper oil" - were leading law enforcement and security providers back to tear gas, which has been used by the military and police since the 1960s and is the ingredient of the original Mace.[5] They also developed Reflex Remove as a decontaminant to clean Presidia Gel off a subdued subject, ending the discomfort (this makes the product more humane).

In 2016, Anderson, a native Montanan, met Mangold, also a Montanan, and partnered with him to found Reflex Protect (the company) in Missoula, Montana, to promote, market, and distribute Reflex Protect with Presidia Gel.[6] A major market for Reflex Protect is healthcare, especially in the psychiatric units of hospitals and in mental health institutions. In a white paper, a chart - "Violence against workers by occupation" - shows that psychiatric aides are those most likely to suffer injury from intended violence while at work.[7] Other markets are corrections, law enforcement, schools, homes, government offices, businesses, and churches.

Reflex Protect Tactical is training for law enforcement officers. This is conducted by Tactical Defense Training, Inc.[11] Those completing the program are certified for the police use of Reflex Protect and Reflex Remove.

On Amazon, three customers rated the Reflex Protect Self Defense Spray. All were positive, two 5-stars and one 4-stars.

The company received a testimonial letter from the security director of a hospital in Washington State.[12] Here's a summary of the account:

A patient somehow acquired a weapon. Using it to threaten a nurse and other staff, he demanded they help him escape.

An orderly managed to alert security. The responding security officer fired Reflex Protect at the patient's face. The patient dropped the weapon and covered his face. He was secured by the officer, who then cleaned off the Presidia Gel with Reflex Remove.

Following this article is a series on verbal de-escalation. Most of the time de-escalation works, successfully restoring calm and avoiding violence. Sometimes, however, the subject becomes violent. Reflex Protect can stop the violence without harming the subject.