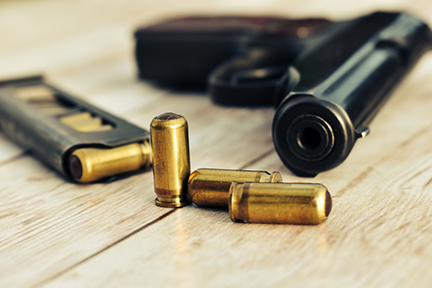 Of Zebulun 50,000 seasoned troops, equipped for battle with all the weapons of war, to help David with singleness of purpose (1 Chronicles 12:33).

"But your servants will pass over, every man who is armed for war, before the Lord to battle, as my lord orders” (Numbers 32:27).

From that day on, half of my servants worked on construction, and half held the spears, shields, bows, and coats of mail (Nehemiah 4:16).

And take the helmet of salvation, and the sword of the Spirit, which is the word of God (Ephesians 6:17).

Ava Missouri, Summer 2016 - Members of a congregation (including the police chief of a neighboring town) formed an armed Church Security Team when the pastor began receiving death threats. Team Members come with their conceal carry or open carry weapons.[2]

Lady Lake, Florida, June 15, 2019 - A police officer observed a barefoot man's strange behavior, including running across a church parking lot and hiding behind a wall. He refused orders to present himself to the officer and had to be tased to be brought into subjection.[3]

Pittsylvania County, Virginia, August 27, 2019 - Sheriff's deputies and state police were searching for a suspect in the deaths of three persons when he ran out of the woods naked. After running at an officer and being pepper sprayed, he ran into a parking lot where he attacked an elderly church employee trying to enter a vehicle. An officer broke his hold with a baton The suspect then ran toward a group of officers where he was tased and finally subdued.[4]

As the sheepdogs of our churches, we are called upon to protect the flock. While this covers many areas of general safety, protection of children, and safeguarding the resources of God's ministries, it also involves, when needed, actual physical protection against several levels of violence, ranging from push and shove to deadly force. In many cases, unarmed defense is sufficient, but sometimes more than hands are needed to defend ourselves and others.

There are several defensive tools which we can use in a Church Safety Ministry. Four of them are in the Sheepdog Church Security Store on Amazon[1] and are marked {SDCS} in the following descriptions.

Full Size Lockdown Magnetic Strips {SDCS}[5] - This defensive tool is not used by Safety Team members unless they are in a classroom or office in a lockdown situation. These magnetic strips are used on steel door frames with doors set for key-only entry. They are placed over the strike plate so the door can be opened just by pulling or pushing on the handle. In a lockdown, remove the strip and close the door. Now it is locked.

UltraFire WF502B Traffic Control Wand LED Flashlight {SDCS}[6] - Yes. A flashlight can be used for defense. In darkness or dim light, it can reveal an intruder or an unarmed disruptive person. If the disruptive person takes a swing, the flashlight in your hand can make a solid parry. Intense light can also blind the disrupter, allowing you or the intended victim to move out of the way. Avoid causing serious injury - such as with a head blow - unless necessary. Such a move can bring legal liability.

SABRE Advanced Compact Pepper Spray with Clip {SDCS}[7] - Pepper spray is a common non-lethal weapon for self-defense, often carried by joggers and urban pedestrians. The oleoresin capsicum (pepper oil) can blur an assailant's vision and throw him or her into a coughing or sneezing fit.

This spray also has two kinds of tear gas to lengthen the time of the effect. It will give the defender time to get away or, if called for, restrain the offender. Of course, restraint constitutes citizen's arrest, and must meet the law's conditions for that. The use of pepper spray is regulated in many state and local jurisdictions, so check state and local laws before getting the spray.

VIPERTEK VTS-T03 Heavy Duty Rechargeable Stun Gun and LED Tactical Flashlight [8] - This is only one of the several models of stun gums sold on Amazon. These are contact devices. When on, the contacts deliver a stored electric charge which can overload the subject's nervous system. Tasers, on the other hand, can reach across a specified distance with two electrodes to deliver the charge. Like pepper spray, stun guns and tasers may be subject to regulation.

Batons, Kubatons, Tactical Pens, etc. - Batons can easily be wrongly used, so in many places training is required for carrying and using a baton. Closely related are coiled whips, which can be flicked out to deliver a blow in a second or two. Kubatons can by carried on key chains. Tactical pens are pens which can double as kubatons, etc. These are specifically addressed by the laws in some states, but are covered by concealed weapon regulations in most other states, such as in Ohio[9].

Schrade SCHA3BS 7.3in High Carbon S.S. Assisted Opening Folding Knife {SDCS}[10] - This knife is in the SDCS Store as a utility tool for circumstances requiring cutting. However, it is also a potentially lethal weapon, and must be handled with the same caution. Unless you are skilled in knife throwing, this is a close-contact weapon with a range limited to the extent of your arm.

Handguns - When we refer to armed security personnel, we usually mean carrying firearms. In almost all cases of church security, the firearms carried are handguns. For church security, this is most often concealed carry. In a few places, safety/security team members may have open carry. Most weapons laws applicable to a Church Safety Ministry concern firearms. Always check the laws of your state and local jurisdiction for armed church security and firearms in general.

Church Security Safety Team members should receive training before possessing and carrying any weapons, lethal and non-lethal. This includes skills, safety, and laws.

In Minnesota, Sheepdog Church Security has partnered with Gun Permit Center (GPC)[11] for firearms training and certification[11a]. They also have a course for the Florida CCW permit.

For those of us not in Minnesota or Florida, there is an additional advantage to the GPC website. Under "Resources" it has a page "How to Use Defensive (Pepper) Spray"[11b] and a "Reciprocity Map"[11c]. On the "Reciprocity Map" click on your state and it will bring up a page with the basic facts about its conceal carry laws and a list of the states with which it has reciprocity agreements. Also on the page is a link to that state's office for Concealed Carry Permits. Some states have a place to search for firearms instructors.

The three other articles in this series are "Equip the Mind, Dress to Serve" (studying and dressing for safety), "Equip to Rescue" (Aids for Evacuations), and "Equip for Medical Response" (Ready for Medical Emergencies).