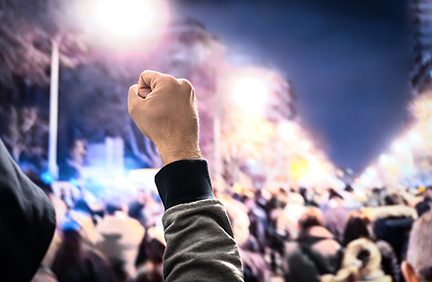 Mobs are described in the Bible in at least five places:

But before they lay down, the men of the city, the men of Sodom, both young and old, all the people to the last man, surrounded the house. And they called to Lot, “Where are the men who came to you tonight? Bring them out to us, that we may know them” (Genesis 19:4-5).

As they were making their hearts merry, behold, the men of the city, worthless fellows, surrounded the house, beating on the door. And they said to the old man, the master of the house, “Bring out the man who came into your house, that we may know him” (Judges 19:22).

But the Jews were jealous, and taking some wicked men of the rabble, they formed a mob, set the city in an uproar, and attacked the house of Jason, seeking to bring them out to the crowd (Acts 17:5).

And when he came to the steps, he was actually carried by the soldiers because of the violence of the crowd, for the mob of the people followed, crying out, “Away with him!” (Acts 21:35-36).

For we really are in danger of being charged with rioting today (Acts 19:40).

Cape Coral, Florida, October 18, 2020 - About 2:20 am on Sunday morning, vandals entered a church through an open window and vandalized the Children's Department and offices, inflicting over $20,000 worth of damage. The perpetrators also tried to break into parked cars, damaging some. Outdoor surveillance video coverage led to the identification and arrest of three juvenile girls in the middle of the week.[2][3]

Troy, New York, June 28, 2020 - Sunday morning services were disrupted by aggressive protesters, who harassed arriving church members, including mothers with children, and impeded them from entering. The activists eventually entered the church, stopping the service. They were finally escorted out by police.[4]

San Francisco, California, September 19, 1993 - Activists opposing a church's stand on social issues besieged it on a Sunday evening. This was no peaceful protest with people lining the street carrying signs, but a mob ignoring the state law against deliberately disrupting religious services. First they distributed bogus fliers, pretending to be the church's announcement of a public meeting (not covered by the law) at the church at that time - however, this was a regularly scheduled service not intended to be a public event. Then they physically accosted church members, took down the Christian and U.S. flags, damaged property, and attempted to break a side door to get in.

Responding police officers did little more than observe. They later told a church elder that city officials would not back up whatever they did to stop the mob. National public response to the riot prompted the city's Board of Supervisors to hold a meeting. However, they really did nothing.

The riot led the State Assembly to strengthen the law protecting religious services.[5]

St. Louis, Missouri, June 27, 2020 - A group of Catholics and sympathetic Protestants held meeting to pray for protection of the statue of the French king and saint for whom the city was named. This meeting was attacked by a mob incited by an activist wanting the statue taken down. The incitement included slander against the churches involved, such as calling them "racists", "KKK", "Fascists", and "White supremacists" Responding police stood between the noisy activists and the prayer group. After the service ended, activists chased down and attacked persons leaving the meeting. The instigator tweeted a video of one attack with this message: "This is how racists should be treated. I'm not even gonna worry about blurring dude's face cuz it's already everywhere. He's my hero."[6]

We have a free download, Active Shooter Situations,[7] which briefly outlines active killer situations on one page. On the second page is a checklist of what to do when an active killer begins shooting at your church. Are you already subscribed to the weekly Sheepdog Church Security newsletter and The Church Guardian? If not, this will sign you up. Get them now by clicking here.

Mob violence is nothing new. It was a factor in destabilizing the Roman Republic, leading to a series of dictatorships, then rule by emperor. No wonder rioters were killed on the spot! Mobs have been motivated by racial, ethnic, political, social, and religious intolerance, and still are. For instance, anti-Semitic pogroms included mobs attacking Jews.[8] In 1921, a false accusation in Tulsa, Arizona, led to a riot that destroyed a prosperous Black community and killed over 300.[9] Beginning in the time of the Apostles, Christians and churches have been, and still are, subject to mob violence in times of persecution, even when the persecution is neither instigated nor condoned by the government.

This year has seen widespread civil disorder, including rioting, arson, looting, and targeted attacks. Some of the targeted attacks are against churches, such as a fire set at St. John's Episcopal Church in D.C.[10] and the burning of the San Gabriel Mission Church in California.[11] Therefore, it is not unreasonable to consider how we should respond to a mob heading for our church, especially if classes and/or services are in session.

There is a place for public protests. In fact, the right to peaceable assembly for the purpose of petitioning the government and other entities is protected by the Constitution. As long as there is no violence and public thoroughfares, streets, and buildings are not blocked for too long a time, it is perfectly legal to march as a group carrying signs. But preventing persons from entering or leaving a building is not peaceable assembly, especially if the persons are physically restrained. In that case, it is legally an assault.

If protesters become violent, then the group becomes a mob and the protest becomes a riot. This does not mean that isolated altercations turn it into a riot. On the other hand, violent persons can come to the scene of a legitimate protest and start a riot, in essence hijacking the protest. Street criminals then can take advantage of the disorder for massive theft.

Sheepdog Church Security has advice for what to do if protesters show up outside your church. This is not the same as one disruptive person inside. The Security Team Fundamentals course says, "A group of protestors picketing outside the church presents a very different situation than, say, a person under the influence of alcohol, in the sanctuary, interrupting the worship service."[12] The protesters may have a legitimate complaint against the church. On the other hand, they may disagree with the church's theology and doctrines, certain standards the church has for its members, or the stand a church takes on a social issue.

There are a few simple rules for handling a protest. First, it is better for the protest to be publicly announced in advance, especially if the church has been notified that there will be a protest. One purpose of an advance notice is avoiding a panicked response, making it safer for both sides. This, of course, is in addition to creating publicity for the protesters' cause and bringing in the news media. For the church, this means that they have time to prepare their response and to instruct everyone on the right course of action, summarized in five points:

Respect their rights. They have the right to peaceable assembly as long as they do not trespass or resort to violence.

Protesters may become violent, but many times the protest is taken over by violent actors who intrude.

Even before a violent mob comes to your church, you need to be prepared. For the building, this is the same as for an active shooter[14] and for arson prevention.[15] Briefly, these are:

It's Sunday morning. Sunday School is over and the first service is about to start. Parents head to the worship center after leaving their youngest children in the nursery, toddlers' place, or pre-school classroom. Children's Church leaders are getting ready for those who'll come after the singing.

Your phone rings. A police officer informs you that "protesters" are headed your way, and not all of them are peaceable. Known agitators have joined the crowd, and more will follow. Now, what do you do?

If you are following recommended procedures, all but the main doors are already locked and are to be locked after the service starts. Hurry any congregants coming in and lock the doors behind them.

Here are Kris's recommendations for facing a mob;

More people in this country are taking advantage of their right to assemble peaceably. Sometimes they picket churches. Violent mobs are also more common now. Be ready for if and when they come.

This article joins the three in the Active Shooter Response series: "Our Wall and Our Shield" (Hardening the Church against Active Killers), "Encounter" (Responding to an Active Killer), and "The Aftermath" (Following the Shooting).