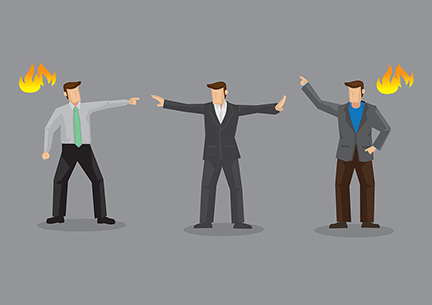 The Bible has a lot to say about dealing with anger, whether our own or that of someone else.

“Blessed are the peacemakers, for they shall be called sons of God" (Matthew 5:9).

There is one whose rash words are like sword thrusts, but the tongue of the wise brings healing (Proverbs 12:18).

A soft answer turns away wrath, but a harsh word stirs up anger (Proverbs 15:1).

Gracious words are like a honeycomb, sweetness to the soul and health to the body (Proverbs 16:24).

Whoever restrains his words has knowledge, and he who has a cool spirit is a man of understanding (Proverbs 17:27).

If one gives an answer before he hears, it is his folly and shame (Proverbs 18:13).

Whoever gives an honest answer kisses the lips (Proverbs 24:26).

A hot-tempered man stirs up strife, but he who is slow to anger quiets contention (Proverbs 15:18).

An ice cube can cool a fresh burn, or soup that's too hot to eat. Cold running water cools boiled eggs. A fan can cool you on a hot day. But how can we cool hot tempers?

Rarely does a successful use of verbal de-escalation at church make the news. Its failure is more likely to be considered newsworthy. However, disruption and threats of it do make the news. Think of how you would respond in each of these situations:

Warning about a Non-Violent Disrupter

East Tennessee, October 23, 2019 - A sheriff's office in East Tennessee posted an alert to churches about a person coming to worship services and Bible studies. Sometime during the sermon or the lesson he asks questions, then begins to debate or argue. While doing this he records the encounter with his smartphone. Later, he posts video footage online. The sheriff shared a photo of the person so church leaders would know who to watch for.[2]

Lansing, Michigan, Olympia, Washington, other cities, November 2008 - A radical gay group infiltrated a church near Lansing, MI while other members of the group gathered outside. At some point during the service, they stood up, displayed signs, and shouted slogans. On the street outside, the others made noise and shouted through bullhorns. They did leave when asked, so sheriff's deputies did not make any arrests or issue citations.

It was a different story in Olympia, WA, where demonstrators affiliated with those in Michigan engaged in vandalism. In 2008, this group had chapters in several cities, raising concerns about possible future disruptions.[3][4]

Columbus, Ohio, January 22, 2021 - During a pro-life mass on the anniversary of the 1973 Roe vs. Wade decision, protesters marched into a Catholic cathedral carrying signs and shouting slogans. Some of the protesters were still in the church when police arrived. Four of them were charged with criminal trespass and disorderly conduct.[5]

Fort Wayne, Indiana, December 2010 - A young man with a mental-health issue attended Sunday services several large churches in the Fort Wayne area, sometimes two on the same morning. In each one, he stood up during the sermon and loudly proclaimed that there would be a nuclear attack on New York City within a couple of months. He was not violent and usually left after someone spoke to him.[6]

Raleigh County, West Virginia, April 7, 2019 - A man went into a church on Sunday morning, created a disruption, and threatened the pastor and the congregation. He claimed to have firearms. Some men in the church brought him under control and took him outside to wait for responding deputies. When the officers arrived and took him into custody, they found firearms in his vehicle. More were found at his home.[7]

The special download for April is Behavioral Emergencies: Dealing with people in crisis.[8] It is based on several professional sources and has four sections: Causes of a behavioral emergency, Symptoms of a potential behavioral emergency, The potential for violence, and Verbal de-escalation. Click *HERE* to get it. You will be signed up for the monthly newsletter, The Church Guardian, and the weekly update email - that is, if you're not already subscribed. You can find out more about verbal de-escalation in the Church Security Guide article, "Disruptive Individuals: How to De-escalate the Situation"[9], and even more in the training course Deescalating Disruptive Persons v4.[1]

Reflex Protect with Presidia Gel[10] is the featured product for this month. Sometimes verbal de-escalation isn't enough, and the subject becomes physically violent. How can you gain control without seriously injuring the person or endangering others in the area? The unique spray head on Reflex Protect shoots a tight stream of the gel, which sticks to the target. Once calm is restored, Reflex Remove, a decontaminant, can quickly remove the gel (it also works on pepper oil).

If churches in your area are warned about a disrupter, such as the one in East Tennessee,[2] how would you plan to respond if he showed up at your church? How would you respond if one or more protesters stood up in the middle of a service, as happened in Lansing[3][4], or marched in as was done in Columbus[5]? The news story from West Virginia[7] did not say what kind of disturbance the man created in the church before making the threats, therefore we do not know whether anyone tried to use verbal de-escalation.

More likely scenarios, though, are a conversation becoming an argument, an estranged spouse coming in to confront the other spouse or to take their child, and an already agitated attendee becoming more agitated. Then there are mental health meltdowns. Sometimes you may recognize that someone is suicidal.

Police often encounter these kinds of scenarios in their calls, so most news stories about these situations involve the police. Therefore, a lot of discussion of these situations and how they have been and should be handled are on websites about law enforcement. One topic is subjects with various disabilities or with linguistic and cultural barriers. Of special concern are those with mental illness, cognitive impairment, and autism, conditions we may encounter in church.

A tool to slow down, stop, and reverse disruption

The second level on the Use-of-Force Continuum[11] is Verbal Commands. Verbal de-escalation fits in here, but at a different angle. Call this a positive force, which soothes frayed nerves and calms frayed tempers. It is the "gentle answer" that "turns away wrath" (Prov. 15:1) and the manner of the peacemaker (Matt. 5:9).

There are a few people who seem to naturally have the knack of cooling heated tempers and bringing peace to difficult situations. They probably learned this growing up, practicing it from an early age. However, most of us need some instruction and a lot of practice to master this skill. Verbal de-escalation is being taught to law enforcement and corrections officers, educators, healthcare workers, and business managers and employees. It is also taught to religious personnel, including safety & security ministry teams. In addition to courses, there is also advice and instruction online through denominations, church insurance companies, and parachurch and in-church ministries (such as Sheepdog Church Security).

The Sheepdog Church SecurityTraining Course "Deescalating Disruptive Persons v4"[1] was designed to train members of a Church Safety Ministry in dealing with disruptive persons. It can also be used to teach verbal de-escalation skills to others in the church, such as greeters, church leaders (including pastors), ushers, and teachers. This broader base of responders may provide more immediate action when needed. If the responder has a radio - or an emergency-alert button keyed to the Safety Team radios - a Security Team member can come as backup. When you are holding a class on verbal de-escalation, ask these other people to attend. At the least, they will understand what is going on when they see a Safety Team member deescalating a situation.

The Skill of Verbal De-escalation

We cannot give a complete course on verbal de-escalation in this article, but we can present a short description and outline.

It may seem odd to some that a "verbal" skill begins with "non-verbal" components, but these are just as important in communication as words. In emotionally-charged encounters, the non-verbal component is more important. These components are body language, facial expressions, and tone of voice. 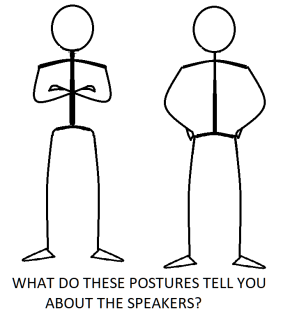 Posture matters. Be conscious of your body posture Think of what your impression is when the person speaking to you has their arms folded or their hands on their hips. Or when they are relaxed and alert?

The SDCS Training Course[1] has these posture pointers:

Likewise, your face says more than your words do. Not only that, your facial expression actually changes how your words sound, so even when the other person can't see your face, he or she can sense your expression - that's what they teach employees whose job is calling people or answering the phone.

In verbal de-escalation, we're not acting and not usually addressing a crowd, but we do want our voice to calm distressed persons and defuse anger. Controlling our voices is a key to controlling the situation.

Again, from the Training Course:

When we are intending to use verbal de-escalation, we need to keep our goals in mind:

If the situation is potentially very disruptive or violent, call for backup. Use "Code Orange" with your location. If you expect violence, add 911 to the code.

This depends on trust. First, don't sneak up on the person(s). We don't want them to feel they're being ambushed. Stand at ready-ease in the interview stance: a little to one side with your feet at a moderate angle to those of the subject, your preferred hand on the side away from the person, your hands in front, about waist high, slightly cupped (not clasped).

Stand close enough to communicate without invading the subject's personal space. The more nervous or agitated a person is, the more their personal space increases, up to six feet (sounds like social distancing).

Get the person talking

Introduce yourself. Ask for the other person's name, and use it often. Let them know you want to help. If they ask why you are helping, be ready give them a reason. Remember that when people are more emotional, as a rule they're less logical.

Listen in a way that lets them know you're listening: active listening. Echo what they say. Use phrases like, "I see." Confirm your understanding of what they've said with words such as, "Man, that sounds tough."

First, exercise self-control over your emotions, your words, your posture, your movements, etc. Also control your thoughts.

There are a number of things to avoid while deescalating a situation:

When protestors make a scene, it's because they want the public attention of a scene. They will provoke you into saying or doing things which will put you into a negative light. Don't bite. Don't try to de-escalate protestors, especially on the street. It probably won't look good on TV or in the papers, besides being not likely to work.

Keep your cool. Do not respond in kind. Use "I" statements, not "you" statements. If it gets to be too much for you, have someone else take over.

Find out what issue is being protested. Refer all questions to a person or persons authorized to speak for the church. If you are that person, have a prepared statement ready in case reporters ask you questions on the issue. If that will take a while, have a response indicating you may have an answer later.

Life's little disruptions come and go. We don't want a little one to grow into a big and dangerous one. Watch and be alert for when things are going too far. Know when to intervene and use verbal de-escalation to cool down the situation.

April's focus, Back from the Brink, is on Verbal De-escalation. The first article of the month is "Finding a Non-Violent Defense" (The Background of Reflex Protect). It features a relatively new defensive spray to use just in case de-escalation doesn't work and you need to stop physical violence. Two articles are on verbal de-escalation, this one and "Seeds of Disruption" (What Causes Disruptive Behavior?). Rounding out the month is The 2003 Turner Monumental AME Shooting, an article in the series Lessons Learned from Church Shooting Incidents.