Radio Use and Reporting 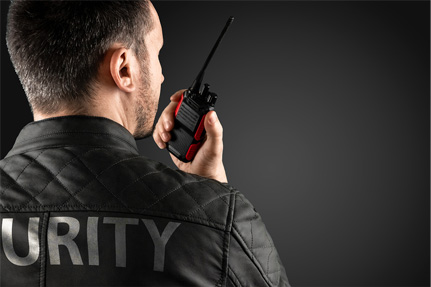 Based on the Church Safety and Security Volunteer Academy [1]

Then one who had escaped came and told Abram the Hebrew, who was living by the oaks of Mamre the Amorite, brother of Eshcol and of Aner. These were allies of Abram (Genesis 14:13 ESV).

“Bring also these ten cuts of cheese to the commander of their thousand, and look into the welfare of your brothers, and bring back news of them” (1 Samuel 17:18 NASB).

And [Mordecai] wrote in the name of King Ahasuerus and sealed it with the king's signet ring. Then he sent the letters by mounted couriers riding on swift horses that were used in the king's service, bred from the royal stud (Esther 8:10)

And all the acts of his power and might, and the full account of the high honor of Mordecai, to which the king advanced him, are they not written in the Book of the Chronicles of the kings of Media and Persia? (Esther 10:2).

Now the son of Paul's sister heard of their ambush, so he went and entered the barracks and told Paul (Acts 23:16).

Communication - A Key to the Success of a Ministry

The one common element in all the Bible passages quoted above is communication. It was sometimes oral, sometimes written. In the first passage, it was urgent news, which resulted in a successful rescue mission. In the next, Jesse asked David to find out and report to him how his other sons were faring. Other passages have a watchman reporting his sightings, a high official sending commands, written records, and a warning.

Communication has always been an ingredient in all kinds of organizations - commercial, governmental, military, social, religious - and in relationships. Even enemies communicate with each other, whether it is hostile exchanges, prisoner swaps, or negotiating for peace. Communication may be internal or external.

For a Church Safety Ministry, communication can be in person, by written notes and memos, over two-way radio, and in reports. The "Sample Policies and Procedures" section in the Church Safety and Security Volunteer Academy[1] includes radio use, emergency communications, and reports & forms.

With two-way radios, it is possible to communicate with more than just the team. Fixed radios can be placed in classrooms and the office for inter-department communications. Separate channels can be assigned to other departments, such as the nursery and preschool. One example of use would be calling the nursery to say a non-custodial parent is in the building. Another example is the pre-school care room calling the Safety Team to say that a child is ill and the parents need to be notified.

There are nationally and internationally recognized protocols for using two-way radios, whether ham (amateur), CB (Citizen Band), emergency services (fire, police, ambulance, medics), truck fleets, or private systems (including church safety ministries).[2][3][4] The radio use procedures in the Church Safety and Security Volunteer Academy are based on these protocols. The intent of these procedures is to promote clarity, order, efficiency, and courtesy.

Using earphones has two primary advantages. The first is that it keeps messages confidential. Only you know what comes over your radio. The second is that it does not disturb services, classes, and other activities in the church. For instance, if you are in the sanctuary during the sermon and are called to go to the kitchen, you just quietly leave unnoticed.

Check It out, Check It in

The two-way radios belong to the Church Safety Ministry. They are there to be used by the Safety Team when on duty. Therefore, it is important that (1) they are accounted for, and (2) they are available and charged when needed. A Safety Team member reporting for duty is to check out a two-way radio and headset for use during the shift. The Academy says, "Ending your shift … Turn in Equipment." At the end of the shift the radio is to be checked back in and put on the charger.

Responsibility for the radios also extends to handling them with care and maintaining them. This is stewardship of resources.

Etiquette is, by history and definition, respect and consideration for others.[5] Radio procedures define etiquette for using radios. Three points made in the Volunteer Academy are (1) Use radios only for official safety and security communication, (2) Keep transmissions short, and (3) Interrupt transmissions only in an emergency.

Small talk and meaningless chatter may be permissible on CB radios, but not on a Safety/Security Team radio system. That way, if you hear something on the air, it is important enough for you to pay attention. Also, using profanity, playing music, and making inappropriate comments (such as ethnic/racial slurs or jokes) is not acceptable and will result in a reprimand or discipline.

The reality of two-way radios is that you cannot talk and listen at the same time. When you push the PTT (Push To Talk) button, it becomes a transmitter, and when you let the button up it returns to being a receiver. When what we say is short, we can then hear what others are saying. Also, by keeping your transmission short there is not too much for the other person to remember.

Clear and understandable communication is the goal of radio use. Being cute or clever reduces understanding. In line with keeping transmissions short and understandable, there are standard Plain English phrases which we need to know and use. Here are those listed in the Academy (note how much shorter the phrase is than the sentence it stands for):

It's not hard to see how using these phrases make routine transmissions shorter.

To the list we can add "Over" meaning "Message finished," and "Out" meaning, "I'm finished with the conversation."

One common CB phrase we don't use in a Church Safety Ministry is "Ten-four." That is from CB Radio's 10-Code, which we don't use.

For Church Safety & Security there are seven approved codes to use, six colors representing six situations, plus a request to call emergency services (fire, law, EMT). These are similar to PA codes for retail stores, though not exactly the same. The approved codes are:

While we use two-way radios for communication within the church, there are some situations where local emergency services need to be contacted. For this reason, each safety team member should have a cell phone. This can be used to call out.

If your mobile phone number is based in an area other than where the church is located, calling 911 may delay contacting the right agency. It is better to enter the emergency phone numbers of local law enforcement, fire department, and EMT service in your phone so you can contact them directly.

If you are the one calling emergency services, there is important information they need to know:

Be ready to answer the phone if they call back. Identify yourself.

Documentation is an important form of communication. Two of the quoted Bible passages refer to documentation. In fact, there are several pages of documentation in the Old Testament, such as genealogical records, census results, lists of officials, official accounts of government edicts and military actions, etc. 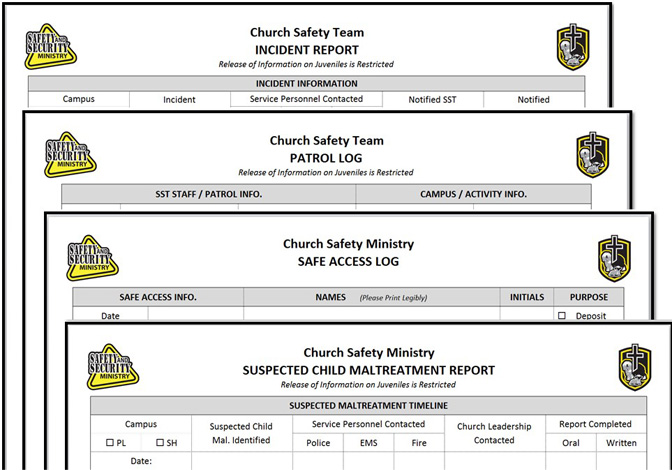 There are a number of reasons why the church should keep these records for a period of time. Documentation is needed for investigation of incidents by the Safety Committee and Director, by the church's leadership, by law enforcement, and in case of a claim, by the insurance provider.

Incident reports can be used in evaluation of Safety Team responses. This can lead to evaluation of policies and procedures and how they are carried out. Hopefully, this will lead to needed improvements and training.

Documentation is needed if an injury claim is made against the church or the church is sued. This includes both incident reports, patrol logs, and inspection reports.

The Incident Report form has blanks for the date, time, and location of the incident. There are boxes to check for the type of incident and spaces for the persons involved, a description of the incident, what emergency services (if any) were called, and information about the Safety Team member(s) involved.

Keep the safe safe by controlling access to it. The Safe Access Log records (1) who is authorized to open the safe, (2) when it is opened, (3) who opens it, and (4) who the observers/witnesses are each time it is opened.

A Patrol Log records the times when Safety Team Members patrol the premises. This may include the extent of the patrol, such as inside or outside the main building. There should be space for brief notes by the patroller.

This is the report we hope to never have to fill out. However, child mistreatment does happen, even in churches and to children who attend church. All states have some form of required reporting of child abuse, whether physical, sexual, emotional, or neglect. Mandated reporters include any staff person or volunteer who observes or reasonably suspects abuse/mistreatment of a minor or vulnerable adult. Keep these forms on hand and check your state's laws regarding reporting of child abuse. Even if churches are partially exempt in your state, diligently following policies and procedures and reporting abuse not only protects the church from criminal charges, but also reduces the chance of lawsuits and provides a defense.

Some reproducible forms are included in the Training Bundle of the Church Safety & Security Volunteer Academy.[1]

Other articles in this series are "Orientation" (Starting Right), "Setting It Straight" (Policies and Procedures), "Making the Rounds" (Patrolling), "Curricula" (More Courses, Refreshers), and "Access Control" (A Key to Security).