Use of Force Continuum 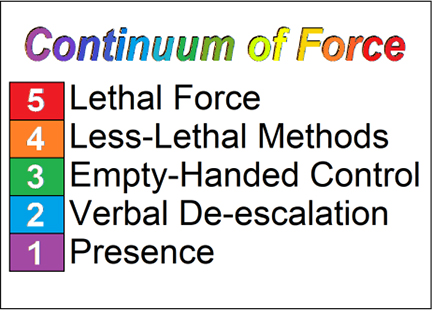 An article based on the “Safety Member Certification” module, “Basic Use of Force Laws.”[1]

The "use of force" has a broader and more diffuse meaning than most people realize. We naturally tend to think of the stronger types of force, and this limited concept tends to limit the options we consider in any situation. Understanding the use of force as a continuum enables us to have a more refined - and more effective - response in a situation and to avoid using excessive force.

Canton, Ohio, January 21, 2020 - A Safety & Security School Resource Assistant in an elementary school grabbed a 6-year-old girl by the arms and carried her across the cafeteria to keep her from going outside (she was on restriction). This was ruled excessive force, and the assistant was terminated. He did not follow the training he received on handling unruly children.[2]

Kansas, 2009 - A former member came into church and disrupted the service, screaming and yelling, making threats against the pastor. An usher put a restraining hold or escort hold on her. He released her when she agreed to leave. There were no long-lasting injuries, just brief pain.

After the church got a restraining order on her, she sued for use of excessive force. The trial court and appeals court ruled that the force used was reasonable and proper, considering both the situation and the church's bylaws. The congregation's bylaws gave the ushers duties consistent with those of a safety & security team.[3]

Cranberry Township, Butler County, Pennsylvania, August 21, 2019 - A man who'd never been there before came into a Wednesday evening prayer meeting. He began disrupting the service with loud talking and strange questions. A security person asked him to leave. He refused and made remarks about how mass shootings erupt. Security called 911 and enacted a lockdown. The man was arrested and charged with making terroristic threats.[4]

Our free download is the Safety Member Training Record. The third sheet of this Excel file is a training record for one Safety Team member. It can be copied as additional sheets (pages) in the file. This puts the training record for each member of the Church Safety Team in the same place on the church's computer. This is in three categories: Yearly Training, Training Every 2-Years, and Yearly Drills. The training/drill types are:

Points on a Continuum 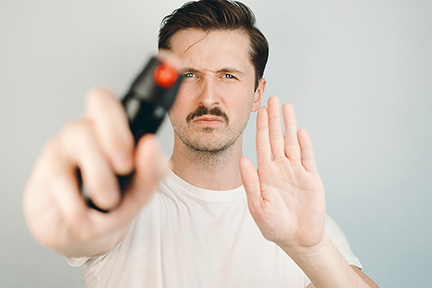 Law enforcement agencies seeking a way to determine how much force was reasonable and what was excessive cooperated in formulating the Use-of-Force Continuum.[7] A continuum is a continuous gradation from one point to another. Certain defining points can be identified along the continuum. A "defining point" is either one of the end-points of the continuum or where one level transitions into the next. There is gradation within each level. There are five levels on the Use-of-Force Continuum. Colors are now assigned to each of these levels. They are Presence (Purple), Verbal De-escalation and Voice Commands (Blue), Empty-handed Control and Unarmed Self-Defense (Green), Non-Lethal to Less-Lethal Weapons (Orange), and Lethal Weapons (Red).

Have you ever noticed how freeway traffic slows down when a patrol car is sitting in the medium? This is one example of how the presence of an observer deters mischief, especially if the observer is obviously authorized to stop it. In Exodus 2:12, Moses looked both ways to see if soldiers or guards were there before he killed the Egyptian taskmaster.

In church, just knowing that a trained and watchful safety team member or greeter/usher is present both reassures the well-behaved and reminds others of their manners. For instance, a would-be thief by the coat rack might have second thoughts if he knew he was being watched. Just how you stand can communicate the need to remain orderly.

Speech is the second level on the Use of Force Continuum. This can be simply letting the subject know you are there, such as asking, "Can I help you?" It includes soft commands, such as, "To the right side, please," and strong commands like, "Stop and put that down!"

An important vocal skill is Verbal De-Escalation. Many times, this keeps a situation from requiring a higher level of force by calming tempers and restoring reason. It is important enough a skill that it has its own module in the Sheepdog Church Security Academy.[6]

This is a rather broad level of force. It can range from just a soft touch to something resembling a street fight. Included in this are "guiding hand" moves, control moves (escort hold, arm bars, wrist holds, etc.), and self-defense moves. Self-defense often uses moves from wrestling, boxing, and martial arts.

Here within this level, we need to be mindful of how forceful we are, to use only as much force as is needed to restore and maintain order. For instance, the usher in Kansas was careful in applying force to control the disruptive woman. She sued anyway.[3]

Commonly called non-lethal devices, the official designation has shifted. The reason is that misuse of otherwise non-lethal weapons can sometimes result in serious injury, even death. Many people do not realize that pepper spray and stun guns are regulated in many places. Several jurisdictions reserve batons for law enforcement officers only. Only a few devices originally considered "non-lethal" are still regarded as such. Most are now classified as "less-than-lethal" or "less-lethal."

As for defensive sprays, some are safer than others. Pepper spray, though it is usually effective, has its problems too. As a result, CS (tear gas) - as in the original Mace - is making a comeback. There is a relatively new product on the market, Presidia Gel, which may be preferred (see ReflexProtect below).

It is this level on the Use of Force Continuum (especially with firearms) which garners the most news and is the subject of much political controversy. This is because of the ranged lethality of firearms. In ancient times, ranged weapons were thrown spears, stones propelled by slings, and arrows. In the Middle Ages, it was longbows then crossbows. The invention of gunpowder opened up a whole new level of ranged lethality.

What Level to Use?

What level of force should we use in any situation? Our priority as a Church Safety Ministry is keeping the congregation's members and guests safe. We are not the police. We only use the amount of force necessary to defend the flock. Nothing more. If we are trained in all levels of force, we are better equipped to defend ourselves and others without using excessive force.

On July 1, 1993, a man with a grudge stepped into law offices on the 34th floor of the 101 California Street office tower in San Francisco and began shooting. He killed eight persons and wounded six before killing himself.[8][9][10]

Joe Anderson lost co-workers in the massacre. He determined to find some way people could effectively defend themselves against a shooter without using a firearm (San Francisco restricted guns in offices). He developed a special head for defensive sprays (ReflexProtect) and partnered with someone who developed a new defensive substance (Presidia Gel).[11]

ReflexProtect with Presidia Gel is promoted for healthcare workers, especially those dealing with potentially violent patients.[12] It is also recommended for teachers, home defense, office workers, and church security. Also available is ReflexRemove, a decontaminant which can be used to remove the Presidia Gel from an already subdued subject.

ReflexProtect is available directly from the company and on Amazon. It is also available through a Sheepdog Church Securityaffiliate link.[13]

It is easy to become legally liable through use of force, even when unarmed. In a Kansas church, an escort hold resulted in a lawsuit.[3] Using some non-lethal weapons can trigger criminal charges or lawsuits. When a lethal weapon is used, you can be sure of at least an investigation which may include questioning by law enforcement where the presence of an attorney is advised. If that happened with you, whom would you call?

U.S. LawShield was formed for such times as these. If you are a member of U.S. LawShield (USLS) and need a lawyer immediately, call USLS and an attorney will call you back soon. If you just need some counsel, one will respond within three days. If you serve as an armed member of a Church Safety Team, get a Sheepdog Church Security affiliate USLS membership.[14]

More than a generation ago, ads for Brylcreem said, "A little dab'll do ya. Use more only if you dare." Using force is like that. Use only what you need. The Use-of-Force Continuum helps us understand how much force is enough.

There are three other articles for October: "Neutralize the Threat" (Containment and Engagement), "Limits of Force" (Use-of-Force Laws), and "2007 Neosho First Congregational Church Shooting" (Lesson Learned).