Care to Be Aware 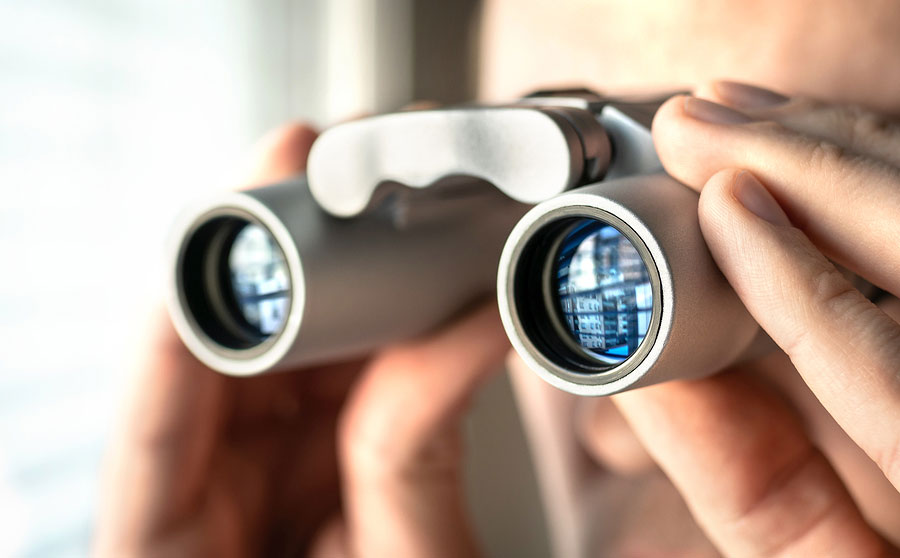 But the man of God sent word to the king of Israel, “Beware that you do not pass this place, for the Syrians are going down there” (2 Kings 6:9).

Stories about situational awareness in action are hard to find. A lack of awareness is more likely to make the news, unless the defensive actions of the aware person are "newsworthy."

She was aware that he was there

Seattle, Washington, March 5, 2017 -The jogger had taken a self-defense course a few weeks earlier. She was out for her usual jog in Golden Gardens Park. She stopped and went into the public restroom. While washing her hands, she was aware that something was not right. Turning, she saw a man standing there. Just then the man (a registered sex offender from another state) attacked. She fought back. Eventually, she got out of the restroom with him inside, secured the door with the help of a passerby, and called 911.[1]

Up from behind in a public place

Manhattan, New York City, March 26, 2020 - It was about 1:00 in the morning. A young woman got off the subway and started up the stairs. A mugger waiting in the station followed her. On the stairs he grabbed her from behind in a bear hug, trying to get her purse. She fought him off, and he fled on foot without the purse, leaving her with bruises and a cut lip.[2]

Seattle, Washington, December 11, 2018 - A few minutes after noon, a middle-aged man walks into a neighborhood grocery store in West Seattle. He goes down one aisle clear to the back of the store. Following the back wall, he looks into the office and other rooms to see if anyone else was there besides the elderly clerk, who is restocking shelves.

Satisfied that she is alone and unaware of him, the intruder comes in behind her and strikes her in the head with handcuffs he holds in his hand. She fights back, and he keeps up his assault. At one point, he leaves her and tries unsuccessfully to open the cash register. Then he turns his attention back to the victim, resuming his attack.

During the melee, she gets as far as the front door and kicks it open. A passerby and a delivery driver see what is going on. The driver intervenes while the passerby calls 911. The robber runs to the rear and out the back door. Arriving police see him, give chase and capture him. The clerk is taken to the hospital.[3]

The Price of Not Being Aware

In these three news stories, the jogger is the only one who exhibited any awareness of her surroundings. Sensing the man behind her, she shifted into a defensive mode. How would this have ended if she hadn't been aware of the attacker and did not turn to face him?

If the clerk stocking shelves had seen the man stalking her, she could have used whatever was in her hand as a weapon. Would he have attacked her if she had shown awareness of him being there?

If the woman leaving the subway station knew the man was closing in on her, she could have defended herself. Being higher up the stairs, a kick would have sent him down backwards, in which case he could have been arrested. As it was, all the police had was surveillance video images.

The Theory and Practice of Awareness

Situational awareness can be described and explained. How to be aware can be told. This is the theory. In the end, it must be practiced to really work.

The Sheepdog Church SecurityTraining Course "Security Team Fundamentals v4" (formerly "Church Safety and Security Volunteer Academy, v3") teaches 570º Awareness. The Church Safety Team member must always be not only aware of what is in a 360º horizontal circle, but also what is in a 180º vertical arc going from one side up, over, and down to the other side. If you are on an upper level, this becomes 720º Awareness, also taking in what is below you.[4]

Jeff Cooper, a retired U.S. Marine, was a firearm expert who developed the "Modern Technique" of shooting a handgun (holding with both hands at eye level) as the alternative to "point shooting."[5] He considered the mental state of the defender as being more crucial to survival than shooting skill. He formulated the "Color Code of Awareness" to explain the levels of awareness and the roles they play in self-defense. There are four levels, each represented by a color: White, Yellow, Orange, Red, and a fifth level (Black) added by the Marines.

If you are alert and paying attention (Level Yellow), there will be times you go to Level Orange, then sometimes on to Level Red. Situational awareness is the first self-defense skill you need. When you are at Level White, an attacker may be able to strike without you being able to use any of your other self-defense skills.

Realistically, Cooper's colors are not the same as threat levels the Department of Homeland Security later used for a long time. Cooper's measure your alertness, not the threat. This is not how dangerous the situation is, but how ready you are to act defensively. 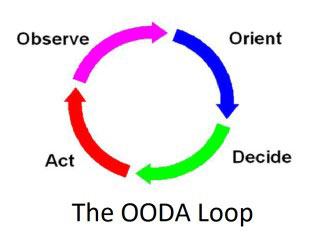 Colonel John Boyd was a United States Air Force fighter pilot who plotted how the thought patterns of a pilot in an aerial dogfight would give him an advantage over his opponent. This became the concept of the OODA Loop, which has influenced not only Air Force fighter pilot training, but military training in general and the decision-making practices of many organizations. Boyd devised the winning strategy of the first Gulf War.[7]

OODA stands for Observe, Orient, Decide, Act. When we Observe (are aware of) a situation, we Orient (adjust) ourselves to that situation, Decide what to do, then Act accordingly. This is called a Loop because it is a continuously repeating process. It is also self-overlapping. While we are orienting and deciding, observation continues, noticing how the situation is developing. We adjust our orientation to the situational changes and change or refine our decisions, sometimes changing our actions while we are acting.

The goal is for our actions to be most effective, positively affecting the outcome of the process. This is most successful when we can be unpredictable by going through the cycle faster than our opponent. [8] Obviously, we must practice this cycle habitually if it is to be natural to us in a defensive situation. We can then also think ahead of the curve to defuse a dangerous situation.

How could we apply this to situational awareness, such as in verbal de-escalation? Let's say you're talking with a distressed person who seems on the verge of becoming disruptive. His arm tenses as he clenches a fist. You ready yourself to parry a blow. He raises his fist as high as his chin. You're ready to block when you see the fist open as he slaps it on his chest. You recognize the lessening of a perceived threat and lighten your tension. As the conversation continues, you are constantly observing, orienting and deciding what to do or say next, and what you say or do is subject to the current state of your OODA Loop.

Integration: Putting These Together

In self-defense as Church Safety Team members, we put these three concepts together. The 570º/720º Awareness is the range of our situational awareness. This includes not only what we see, but also what we hear and what we know. Your two-way radio is part of your senses. You are in Level Yellow - this is not the time or place for Level White. As situations develop, you continuously observe and adapt.

Over the radio you learn that an oddly-acting person is in an area down the hall, so while you are monitoring all the area around you [570º], you are especially tuned to the hallway. You have moved from Level Yellow to Level Orange, because you don't know what odd guy will do when he comes into your area.

Based on this knowledge, you think of your options, depending on odd guy's actions when he appears [OODA]. If odd guy seems to be aggressive, you will move into Level Red. This does not mean you will take defensive action, but that you are ready to do so if necessary.

Now you hear footsteps, and in a few seconds odd guy appears. You are very alert, attentive to every motion he makes, anything he might say. You are in the Loop. Hopefully, this can end peaceably, not in Level Black, but if it does go there, you can defend yourself.

Situational awareness is the first skill of self-defense. Almost always, it is the deciding factor. Be watchful all the way around. Be aware. Stay in the Loop.

This is a five-part series on Weaponless Self-Defense. The remaining articles are "Arms or Arms" (The Continuum of Force), "Hang on" (Using Blocks and Holds), "Down We Go" (Knockdowns, Tackles, Throws), and "Find a Coach" (Self-Defense Training)